When Jon Preston was a five-year-old kid living in Rochester, New York, his family got a computer game called, Backyard Baseball. While playing the game, Jon discovered a real Cardinals player named Albert Pujols and he soon became a fan. 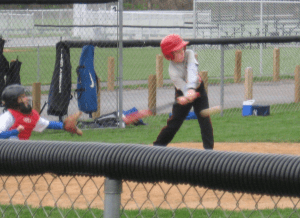 He went all in becoming a fan of Pujols and also the St. Louis Cardinals. Living in Rochester and being a Cardinals fan, he was pretty much on his own in his fandom.

“Jon is one of four and he has a twin brother,” said his mother Cheryl Preston. “He is the only one of our children to really love baseball and of course, he was the only Cardinals fan. I will say though, we have been known to root quietly for the Cardinals (without anyone knowing it) when we could see his heart breaking from a baseball situation.”

He soon began playing baseball, as shown in the photo, left. He played for years and he would always choose the number “five” if it was available.

“His love for Albert and, subsequently, the Cardinals started at such a young age and has never wavered,” said his mother, who, along with the rest of the family call themselves “die-hard” Boston Red Sox fans. “It has been a joy to watch.”

Jon Preston watched his hero win the 2011 World Series, but then when Pujols went to the Angels and after that, to the Dodgers, he still devotedly cheered for the Cardinals.

“He was a Cardinals fan,” said his mother, “But he always, always kept close tabs on his favorite player. He kept his love for the Cardinals and his loyalty also never wavered for Pujols—even when he was gone,”

Flash forward to this summer, the now 24-year-old Preston was overjoyed when the Cardinals announced that Number Five was back.

“It was already a gift to have Pujols rejoin his beloved Cardinals for his last season,” said Cheryl, “But to be able to watch him break that incredible 700 home run record AND to see him play so well at the end of the season, has been a true joy. “

“As Kirk watched him (Jon) play over the years, Kirk’s love for the game grew,” said Cheryl, “Now they share that love–and they  just argue about who’s team is best.”

He attended the State University of New York College at Geneseo (SUNY-Geneseo) and had a double major in economics and political science.

“Jon graduated from college in the winter of 2021, and we asked what he would like for a graduation gift,” she said. “He asked if he could go to a Cardinals game and when Pujols signed he hoped to maybe get to see Albert Pujols play, one last time.” 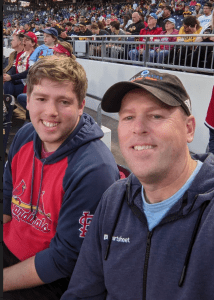 For the last game of the regular season, Jon and Kirk headed to Pittsburgh to hopefully watch Pujols play his last regular season game, but unfortunately for Jon, Pujols did not play.

“When that didn’t happen, we knew what we had to do,” said Cheryl Preston. “We jumped on the computer and got a flight to St. Louis. Then we got a ticket to Saturday’s playoff game between the Cards and the Phillies.”

Father and son flew into St. Louis  on Saturday afternoon and took the MetroLink from the airport to Busch Stadium. Luckily they had a couple of hours to explore the stadium.  Jon was in his element.

“I surprised Jon with bleacher seats where we sat so close to the American flag that I could lean my head back on the pole,” said Kirk.

The game ended up being a disappointment with not much excitement for Cardinals fans. They were shut out 2-0 by the Phillies, failing to come up with a key hit on the few chances that they had. It wasn’t the end of the season the Cardinals had hoped for– in part because it marked the end of the careers of Albert Pujols and Yadier Molina.

Jon and his dad were glad to be able to see Pujols play in what turned out to be the final game of his and Molina’s career. They saw both get hits in their final at-bats and each of them left the game for a pinch runner, giving the fans– including Jon and Kirk Preston– a chance to acknowledge them and show their appreciation for them. Jon had cheered for the Cardinals from afar for most of his life, and getting to see them in person, even though they lost the game, is something he won’t forget.

“The game was a little of a downer, as the offense just couldn’t get going,” said Kirk. “So glad though that Albert had a couple hits, and Yadi had the potentially big one in the ninth. We waved our rally towels, soaked in the atmosphere, and never left our seats once during the game– how do people  do that during a playoff game when every play matters?”

Cheryl watched the game on ABC from their home in Rochester on pins and needles hoping that the Cardinals would score a run. She wanted it to be the best trip ever, but in the end, the score didn’t matter, it was the father-son bonding experience, and two grown men experiencing childhood dreams.

“It was a dream come true for them,” Cheryl said. “As Jon’s mom, I was beyond excited for him and extremely grateful to the baseball player who has given my son so much joy over all these years. Thank you, Albert Pujols.”

“A homer (by Albert Pujols) would have been amazing, but I think Jon just wanted to see him if it came right down to it.”

In the long run, it was a dream come true for Jon– and his parents. And it all started with a childhood video game.

“Sitting in the St. Louis airport (after the game) waiting to fly home to Rochester, I was reflecting on the trip,” said Kirk. “Jon and I had a great time at Busch Stadium. After just a few minutes, he asked me ‘so what’s your second favorite stadium?’

There was no doubting who the winner was, now that we’d taken this trip together.

“This trip was surely something we’ll never forget and even though we lost, it was worth every penny to share this with him.” 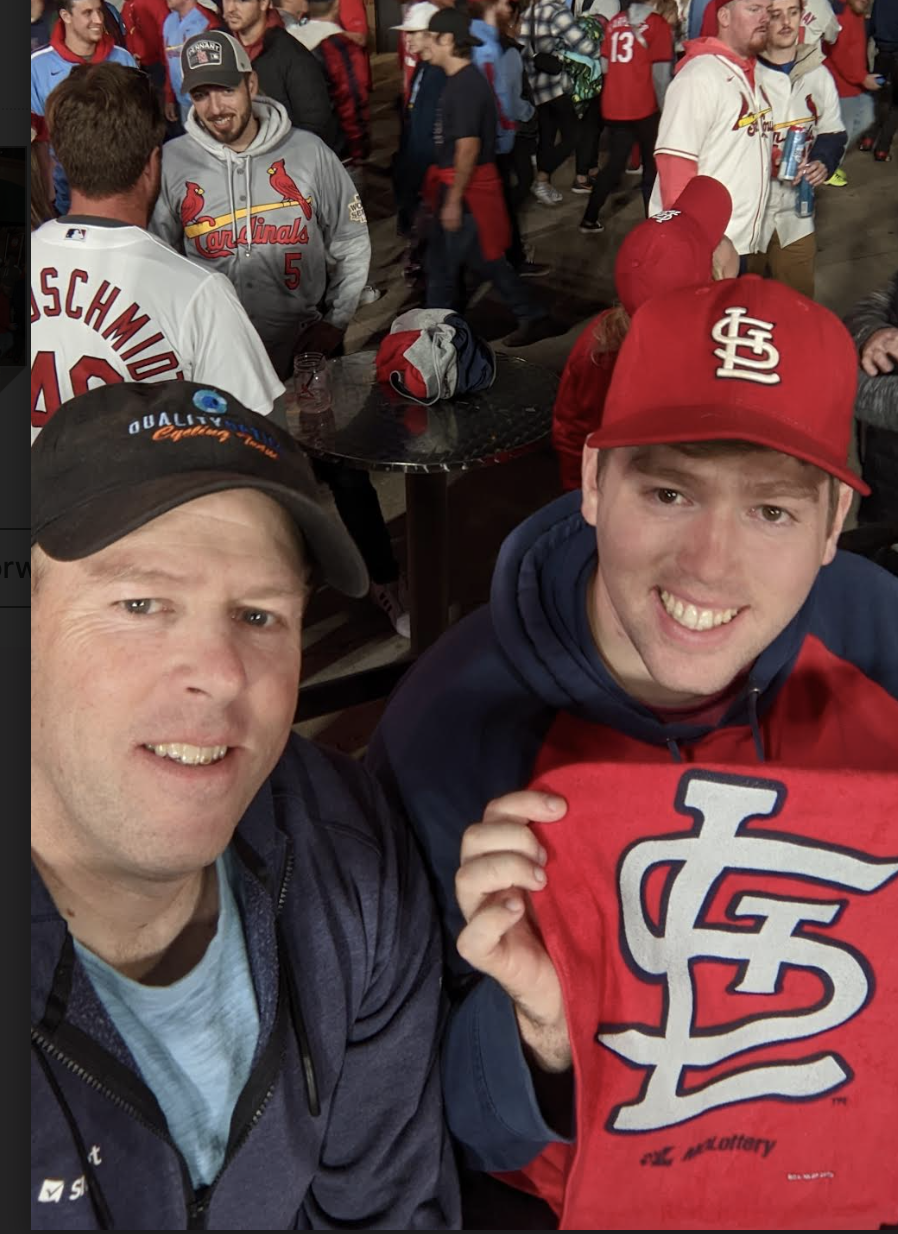 Kirk and Jon Preston with their rally flag in Busch Stadium Saturday night.