The St. Louis Cardinals organization, and baseball fans everywhere, were saddened today to learn of the passing of Hall of Famer Howard “Bruce” Sutter at the age of 69.  Sutter, who was inducted into the National Baseball Hall of Fame in 2006, was just the fourth reliever enshrined, and the first player to have never started a game to be elected.  Sutter was a six-time All-Star and the 1979 N.L. Cy Young Award winner.

His uniform number 42 is one of 14 numbers retired by the Cardinals.

“On behalf of the Cardinals organization and baseball fans everywhere, I would like to express our deepest condolences to the Sutter family,” said Cardinals’ Principal Owner & Chief Executive Officer Bill DeWitt, Jr.   “Bruce was a fan-favorite during his years in St. Louis and in the years to follow, and he will always be remembered for his 1982 World Series clinching save and signature split-fingered pitch.  He was a true pioneer in the game, changing the role of the late inning reliever.” 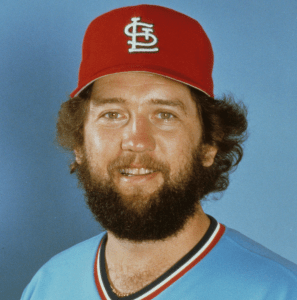 Sutter pitched for the Cardinals from 1981 to 1984. Acquired from the Chicago Cubs on Dec. 9, 1980, in exchange for first baseman Leon Durham, third baseman Ken Reitz and minor-league third baseman Ty Waller, Sutter proved to be a key acquisition for general manager and manager Whitey Herzog in his transformation of the Cardinals from underachievers to World Champions.

During the strike-shortened 1981 season, Sutter saved 25 games – the most by a St. Louis pitcher since the save became an officially recognized statistic in 1969. Chants of “Bruuuuuce!” bellowed throughout Busch Stadium every time he ran in from the bullpen. Sutter recorded 36 saves in 1982 and struck out Gorman Thomas of the Milwaukee Brewers to wrap up Game 7 of the World Series.

Sutter debuted with the Chicago Cubs in 1976. He won the 1979 N.L. Cy Young Award after amassing 37 saves and a 2.22 ERA with 110 strikeouts in 101.3 innings pitched. He was only the third reliever to be so honored, following Mike Marshall of the Los Angeles Dodgers in 1974 and Sparky Lyle of the New York Yankees in 1977.

Sutter’s four-year St. Louis save total of 127 established a franchise record and now ranks fourth behind Jason Isringhausen (217), Lee Smith (160) and Todd Worrell (129). Sutter was voted the relief pitcher on the All-Busch Stadium II team in 2005 and was an inaugural member of the Cardinals’ Hall of Fame in 2014.

Sutter was born on January 8, 1953 in Lancaster, Pennsylvania. He is survived by his wife, Jayme, sons Josh, Chad and Ben; daughter-in-law Amanda Sutter, and his six grandchildren. He is shown at Red Schoendienst funeral iin 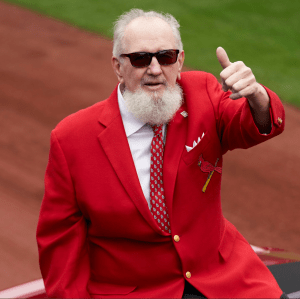 I had the privilege of getting to know Bruce when I covered his years with the Cardinals in the early 1980’s. What I enjoyed most was our baseball discussions. He was always available and interested in talking about the game and helped a young sports writer learn a lot more about the secret of success at the major league level.

Statement from St. Louis Cardinals on death of Bruce Sutter posted on Twitter

We are saddened over the passing of Bruce Sutter. Sutter was a dominant pitcher and a member of the ’82 World Series Championship team. He is a member of both the National Baseball Hall of Fame and the Cardinals Hall of Fame. Our thoughts are with Bruce’s family and friends.

Commissioner of Baseball Robert D. Manfred, Jr. issued the following statement today regarding the death of Hall of Fame pitcher Bruce Sutter, who was 69:

“I am deeply saddened by the news of the passing of Bruce Sutter, whose career was an incredible baseball success story. Bruce ascended from being a nondrafted free agent to the heights of Baseball by pioneering the split-fingered fastball.  That pitch not only led him to the Major Leagues, but also made him a Cy Young Award winner with the Cubs and a World Series Champion with the 1982 Cardinals.  Bruce was the first pitcher to reach the Hall of Fame without starting a game, and he was one of the key figures who foreshadowed how the use of relievers would evolve.

“Bruce will be remembered as one of the best pitchers in the histories of two of our most historic franchises.  On behalf of Major League Baseball, I extend my condolences to Bruce’s family, his friends and his fans in Chicago, St. Louis, Atlanta and throughout our game.”

“Cardinal Nation,
All our father ever wanted to be remembered as was being a great teammate, but he was so much more than that. He was also a great husband to our mother for 50 yrs, he was a great father and grandfather and he was a great friend. His love and passion for the game of baseball can only be surpassed by his love and passion for his family.
Being a St Louis Cardinal was an honor he cherished deeply. To the Cardinals, his teammates and most importantly to the greatest fans in all of sports, we thank you for all of the love and support over the years. He will be greatly missed but his legacy will live on through his family and through Cardinal Nation!
The Sutter Family
Chad Sutter”

Statement from Baseball Hall of Fame:

“Bruce Sutter was so honored when he was elected to the Hall of Fame in 2006, and since that time his kindness, his love for Cooperstown and his humility sparkled every time he returned to the Hall of Fame. The Hall of Fame family will forever celebrate his achievements on the field and remember his passion for his family and friends. We extend our deepest sympathies to his wife, Jamye, and his children.”
– Jane Forbes Clark, Chairman, Baseball Hall of Fame