The Polar Express is back again at Union Station and the media got to have a sneak-peak and a ride on the train. To see a  video of some of the things to expect at the Polar express  CLICK HERE

The popular children’s book, published 37 years ago by Chris Van Allsburg was made into a movie in 2004 starring Tom Hanks. 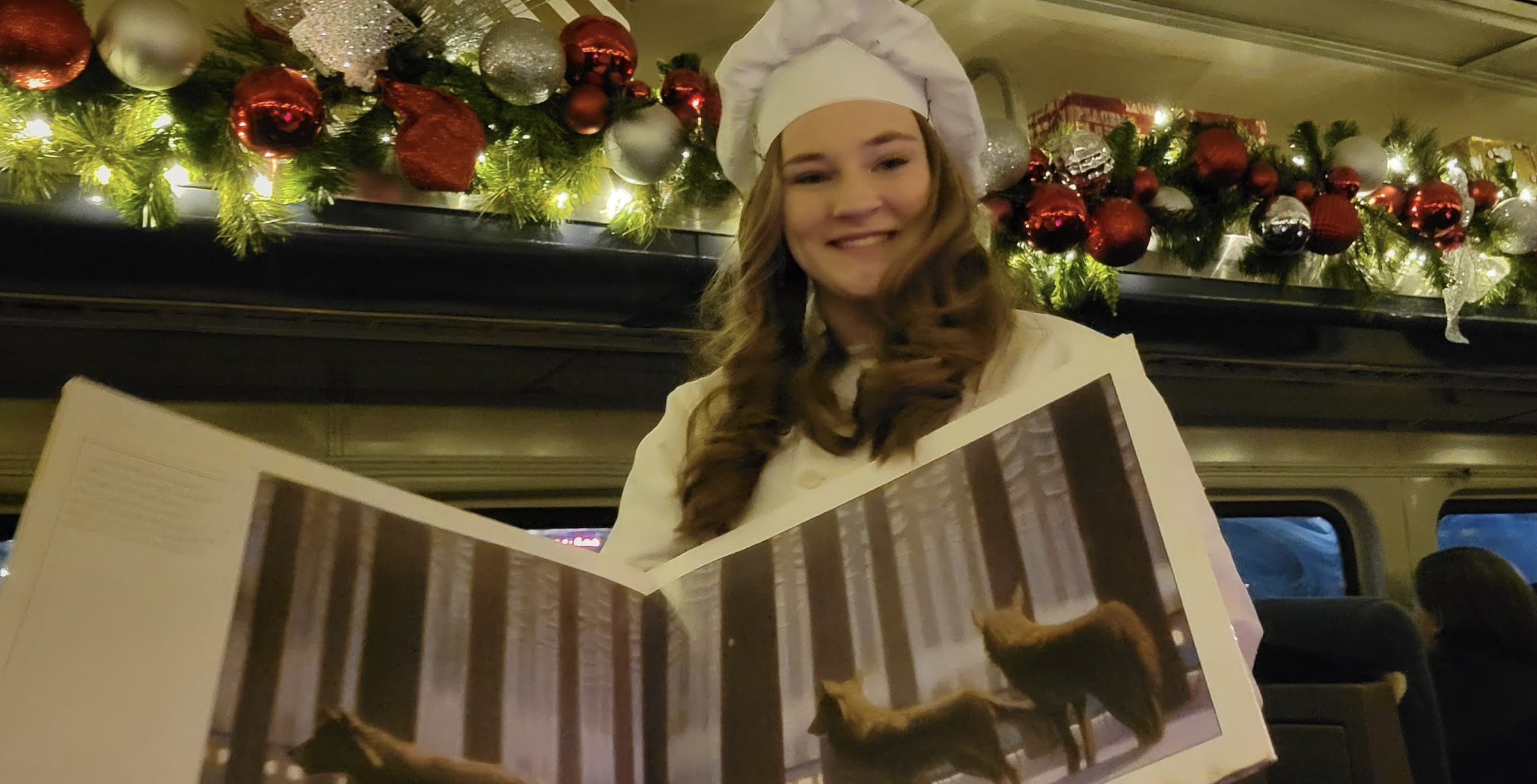 The book was a Caldecutt Award winner and the movie a huge success. One of the neat things about the Polar Express is there is a recording of the author van Allsburg reading the book and the characters held up large copies, showing the photographs to the riders.

This was very touching  even to the adult riders as it invoked memories of their own childhoods when either their teacher or parents would read to them and hold up the book to show the pages.

As this was going on, there was hot chocolate and a giant chocolate chip cooke — gluten-free. Somethow the cocoa and cookies even tasted like childhood

Amazon.com says about the book: “For millions of readers around the world, this mysterious journey to the North Pole has become a beloved Christmas classic.” 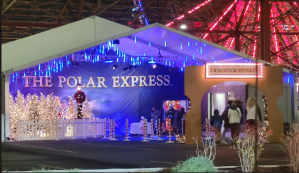 Union Station is exciting with all the lights, the pop up bar “Sleigh Shed” as well as the Ferris Wheel surrounding the bright lights of the Polar Express. Before the train takes off guests get to visit the inside area which is a wonderland of holiday decorations.

According to IMDb: “The Polar Express is the story of a young hero boy who boards on a powerful magical train that’s headed to the North Pole and Santa Claus’ home on Christmas Eve night. During this ride, he embarks on a journey of self-discovery which shows him that the wonder of life never fades for those who believe.”

For children of all ages who read the book or watched the movie, a trip to Union Station’s presentation of Polar Express feels like you are actually in the story. Characters come to life as costumed actors interact with the guests. The conductor greets the train riders and one of Santa’s elves and some bakers walk up and down the aisles engaging the riders.

The train, yes it’s actually a train and you get to take a 45 minute ride on it. The train is dressed up like the Polar Express as described in the book and shown in the media. The train goes out and while the book comes to the end of the story, suddenly Christmas lights are spotted out the window and it passes “The North Pole” where Santa stands on a platform waving at the children– old and young. The wonder on the faces of the children as they see Santa is amazing.

Right as  the train gets to the North Pole, it comes to a stop and Santa comes on board. As he walks up the aisles the children can’t believe it and they are over the moon when he actually stops and talks with them.

The highlight of the trip is when Santa has gone through the train once, he picks up a box of bells and goes back out, passing out bells to all fo the children, encouraging them to ring the bell and “believe.”

The train rides begin at St. Louis Union Station on November 18 and continue through December 30, 2022.

Coach tickets for this St. Louis holiday event begin at $35 and may be purchased online at www.stlpolarexpressride.com. First Class and Premium seats also are available. Prices vary by day, time and ticket class. Group tickets are available for groups of 10 or more.

After the train rides, children can write letters to Santa in a special area with paper and pens. There’s a mailbox for them to mail the letters.

There are numerous photo- ops including a snowman couch and various sets around the room. We can’t say enough about how much fun the whole experience is. The creative developers did a great job with everything, from the delicious cocoa and cookies to the free souvenir “Polar Express” mugs.