Editor’s note: Those who love cooking and baking shows will really enjoy Monday night’s offering on The Food Network at 9 p.m. central: Episode 203 of Food Network’s Holiday Baking Championship: Gingerbread Showdown.  One team is special to us because our cousin Cheryl Brookhouzen is competing with Melissa “Missy” Comerford. 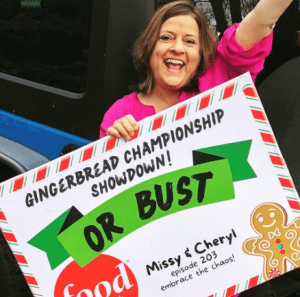 Cheryl Brookhouzen and Missy Comerford have been on a five-month baking adventure, and as Brookhouzen (shown left) says, “Gingerbread Championship Showdown or Bust!”

Fifteen years ago Missy Comerford, who was a new graduate of the Pastry Program at Kendall College in Chicago joined head pastry chef, Cheryl Sleade Brookhouzen’s team at the Chicago Marriott Downtown on the Magnificent Mile. That began a working relationship that became a longtime friendship and now they are competing on national television.

“How could you possibly hope to find someone to work with who is skilled, enthusiastic, full of great ideas and just plain fun?” said Pastry Chef, Brookhouzen.

The episode was taped earlier and they already know who won the competition but we were not privy to that information.

The whole thing has been in the works since July when the Food Network reached out to Brookhouzen.

“When they first reached out, I was really interested in doing it but I had to do it with Missy,” she told STLSportsPage.com from her kitchen in Asheville, NC on Sunday night. “It’s been like getting the band back together. She is the Ethel to my Lucy. I really could not see myself doing it with anyone else.”

Cheryl Brookhouzen has a St. Louis connection: her father the Rev. Doug Sleade, who grew up in St. Louis was the associate pastor at Union United Methodist Church in the 1960’s and he and her mother Pat Sleade lived in St. Louis for a time.

“I’m passionate about sharing my experiences as a Pastry Chef and as a successful Home Host,” she said.

She shares ideas and recipes on her website, TheGiddyChick.com. 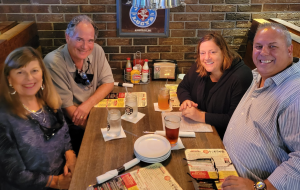 We recently visited them in Asheville. Both are great conversationalists and it was Corey’s gift of gab– mentioning that his wife was a pastry chef to a friend– that resulted in a catering job which turned into another and another. Before they even started the catering business, word got around that Cheryl was available for parties and soon she was doing multiple events a weekend.

“I mentioned it to one person and pretty soon Cheryl was getting a lot of calls,” said Cory Brookhouzen.

And for good reason. She is quite a baker.

In 2001 she graduated from C.I.A. in Hyde Park, New York and worked with highly respected chefs and restauranteurs including Tom Colicchio and Claudia Fleming at Gramercy Tavern and David Bouley at Bouley and at the Marriott Marquis in Times Square.

She eventually made her way back to her home state of Illinois working in Chicago as the Corporate Pastry Chef at Lettuce Entertain You and then spent 17 years as the Executive Pastry Chef at the Chicago Marriott Downtown—where she really upped her game in the gingerbread area. Under her leadership the Marriott’s gingerbread displays were epic.

In 2015, she was hired as the Pastry Chef at the prestigious Inn on Biltmore Estate in Asheville North Carolina where she eventually ended up going out on her own and that is where she is today.

The Food Network debut reunited her with her old friend Missy Comerford and they enjoyed spending time together so much that they are combining their talents with Comerford joining TheGiddyChick.com as a blogger also. 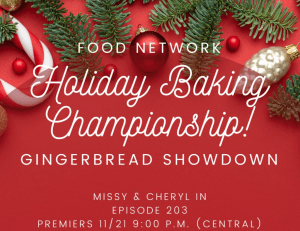 Anyone who has bought a premium baked item from a baker in recent years knows it costs a lot and when Cheryl and Missy agreed to do the show they knew they would want to use the best ingredients money could buy so they started a GoFundMe page and exceeded their goal. They wanted to raise the funds, but at the same time they knew they could not divulge what they were doing.

“We have a unique opportunity to come together and practice our pastry prowess,” they wrote on the GoFundMe page. “We can’t tell you too much otherwise, it won’t be a secret – now, would it?”

They asked their friends to “trust us, and bear with us, and we promise to share information with you just as soon as possible.”

Their lives have been a bit uprooted these past few months as Comerford , who is a wife and busy mom of two, also with catering clients and a website, Comerford’s Crumbs ccrumbs.com

“After having children I decided I would stay home,” said Comerford. “That’s when Comerford’s Crumbs really came along. It became an outlet for myself to unleash all the creativity, have fun beyond the many park playdates and continue my passion for creating those special desserts for whatever the occasion may be.”

An interesting side note, Missy’s last name Comerford is not the first to be associated with gingerbread houses as well as a television competition– as the White House Chef is  Cris Comerford. She was also on a Food Network show — a special episode of Iron Chef America teaming up with Bobby Flay against a team which included Emeril Lagasse and Mario Batali. Missy is no relation to the famous chef but with the spotlight on both Brookhouzen and Comerford we can expect even bigger things than they have already done for both in the future.

Once Missy and Cheryl hit their GoFundMe goal they were able to buy pastry supplies, such as fondant, gum paste, isomalt, as well as mechanics, lighting, ingredients, materials –and transportation for practice together. 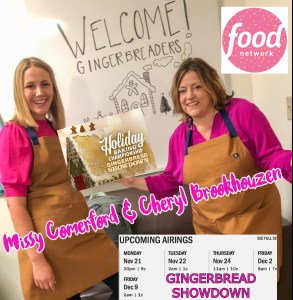 There really could not be a more qualified gingerbread competitor than Cheryl Brookhouzen and Missy Comerford.

At the hotel in Chicago, Cheryl ran a pastry team of twelve talented individuals.

“It was a dream to be a part of a kitchen that made food the old-fashioned way – using whole ingredients to create laminated doughs, desserts, wedding cakes and gingerbread,” she said.

She says that what started as a relatively small gingerbread display of 23 smaller houses, grew each year, and their ideas and displays became larger and grander.

“The displays weighed in from one to two tons of gingerbread dough, candy and royal icing,” said Brookhouze.

The concepts for each display would be roughed out in the summer, with large batches of gingerbread dough being produced and stored in the freezer as early as late September. As time went on, their dough was rolled out on sheet pans using a large mechanical dough sheeter to achieve just the right depth. Sheets were mass baked, cut into patterns, labeled and assembled. Meanwhile, large support structures were being assembled to provide structure for hundreds and hundreds of pounds of gingerbread, icing and candy.

The gingerbread displays were so technical that engineers were involved with planning, lighting and mechanicals.

Massive amounts of ingredients are used in a large gingerbread display. We were not in on the steps taken for the television competition, but just knowing how much effort the two bakers put into their other creations, one can only imagine. 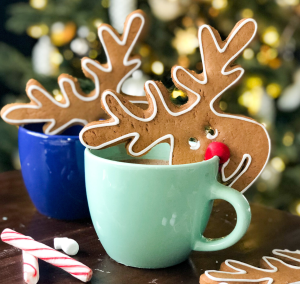 Preheat the oven to 350 degrees Fahrenheit in a conventional oven.

Remove the dough from the refrigerator and roll out dough to approximately 1/4 inch thickness.  Cut out cookies and place on a parchment lined cookie sheet.  Chill for approximately 1/2 hour prior to baking. Bake at 350 degree Fahrenheit in a conventional oven  until the cookies are slightly brown around the edges.  Although baking times will vary based on your oven and size and shape of your cookie, I suggest baking for ten minutes, rotating the pan in the oven and continue to check on your cookies every three minutes until done.  My large cookies took approximately 16 minutes.  Remove from oven and allow cookies to cool completely before decorating.

SUPER HELPFUL TIP ALERT: You can make and freeze the dough up to one month prior to baking. You may also make the dough, roll out on parchment and store (wrapped air tight) in the refrigerator up to three days before baking.

For more on their blog: TheGiddyChick.com

For more on their Air BNB:

“Our private ground floor suite boasts a separate entrance and offers a comfortable space to unwind. The peaceful fenced in backyard is perfect for you and your pet. Guests tell us how ZEN our indoor and outdoor space feels. What’s more, we are super pet friendly! We have NO pet fees for up to 2 pets however we hope you will ensure your pets are not destructive.”