Memories of KMOX as it turns 97

KMOX Radio celebrated 97 years in business on December 24, 2022.  It was on Christmas Eve in 1925 that the first broadcast came, out of its studios at the Mayfair Hotel in Downtown St. Louis. Newsman Ron Barber who worked at the station in the 1980’s when they were based on One Memorial Drive recently began thinking back to his time at the station and all the icons he worked with. He sent this article, as well as the photo taken at the celebrity softball game he mentions: 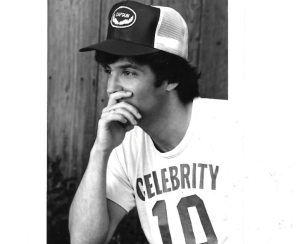 The Day Bob Costas Taught Me a Lesson in Humility

After years of doing the ‘vaudeville circuit’ in my broadcasting career, I finally reached the nirvana in 1980—KMOX Radio, the Voice of St. Louis

Stopovers in such far-flung locales as Herrin, Mount Vernon, Santa Maria, Bakersfield, Lansing, Petersburg (Richmond), Asheville and Spokane had prepared me for the pinnacle of American radio that KMOX was.

At the young age of 31, it felt as if I’d breached the moat and been welcomed into the kingdom.

KMOX was a powerhouse that literally reached all 50 states and deep into Canada with its clear channel, 50,000 watt signal at night.

For decades, it had been (and remains) the flagship station of the St. Louis Cardinals and has been a fan favorite for generations in the Midwest, including many who ended up becoming major league ballplayers themselves.

I was walking among broadcast giants, and it was pretty heady stuff to pass the great Cardinals announcer Jack Buck in the hall, much less have the opportunity to share a microphone with him (as his newsman and occasional foil).

We would invariably whip out a $5 bill when our paths crossed for a quick game of Liar’s Poker.

Jim White was known as the ‘Big Bumper’ among his legions of late night fans, and I was his newsman and second banana for our frequent ‘trivia’ nights.

We’d get calls from all over the country when we jousted with the resident trivia expert, David Strauss.

Art Fleming who had long hosted ‘Jeopardy’ on NBC-TV had come to KMOX, and I used to love to have fun with one of the nicest guys I ever met in the broadcast journey.

One night I played a prank on him involving a Cardinals’ cheerleader –member of the Big Red Line which cheered for the St. Louis Football Cardinals (now the Arizona Cardinals). Art was on the air, and it didn’t take much to get him flustered, so I reached into the cheerleader’s gym bag and took out a pair of her scanties, proceeded to walk into the studio and plant them on Art’s head. No beet ever turned redder.

The man who became my surrogate dad was a broadcast genius by the name of Jack Carney. Jack was to me and remains the singular most talented broadcaster I have ever known. I loved him, and I believe the feeling was reciprocated. We had so much fun together.

Once, he actually came down the hall to the studio where I was reading the local news and cut off my tie, because I’d cut into a minute or so of his program. There were a lot of practical jokes that went on at One Memorial Drive.

I reciprocated later by drip, drip, dripping onto his bald head from a water bottle while he was ad-libbing a commercial. The world lost such a brilliant gift when he passed away at just age 52.

Among the most memorable of this amazing lot was a young fellow about my age by the name of Bob Costas. People called him “Young Bobby Costas” and I still call him Bobby.

He was a little wisp of a guy who had a huge penchant for Woofy’s hot dogs and Ted Drewes frozen custard.

One time in the middle of the newsroom, I challenged him to a height contest.

With literally everyone standing by, someone found a ruler, and I believe to this day, I had him by a half-inch.

But, then to this day, he claims he was the only one among us ‘celebrities’ who got a base hit in a charity softball game again. I keep telling him to show me the instant replay.

One afternoon I was in the big studio at KMOX during afternoon drive where Jack Carney hosted, and I was his newsman and constant foil.

Bobby sauntered in to do the sports update, and it was then I offered him a challenge.

I’d always been an excellent reader and rarely slipped up and I knew Costas was also a great reader.

So, I said on the air: “Bobby, I’m going to bet that you will be the first one to make a reading mistake. If you do, then dinner at Charlie Gitto’s Pasta House is on you. If I make the first mistake, it’s on me.”

The next time he came in to update the sports, the game was on.

I proceeded to read my news insert flawlessly; then, it was Costas’ turn.

To our utter amazement, he ‘read’ it as flawlessly as I’d read my news report; but then I realized he had done it entirely from memory. (It has been said that Costas has a photographic memory)

He just looked up at the ceiling and ‘read’ a perfect sports update.

That afternoon, I learned a special lesson in humility, one I have never forgotten.

Since then, I’ve often wondered what became of Costas. Kidding. Just kidding.