Super Bowl LIII has arrived and with it attention to this year’s host city, Atlanta, Georgia. While the action will revolve around Atlanta’s Mercedes-Benz Stadium, beyond the big game, fans can expect to experience more exciting adventures if they decide to stay in town or return to Atlanta in order to take in the sites. Of course, there will be more games. Remember, besides the Falcons, Atlanta’s SunTrust Park is home the Atlanta Braves – where the Cardinals are set to play the Braves May 14 – 16.

When visiting Atlanta, no matter the time of year, the Gate to the South has a variety entertainments, sites, eateries and sports related destinations designed to make tourists and sports fans happy.  Atlanta has developed a list of must see sport destinations.  Here they are,  along with my own my own favorite must see sites and places to enjoy while visiting Atlanta. 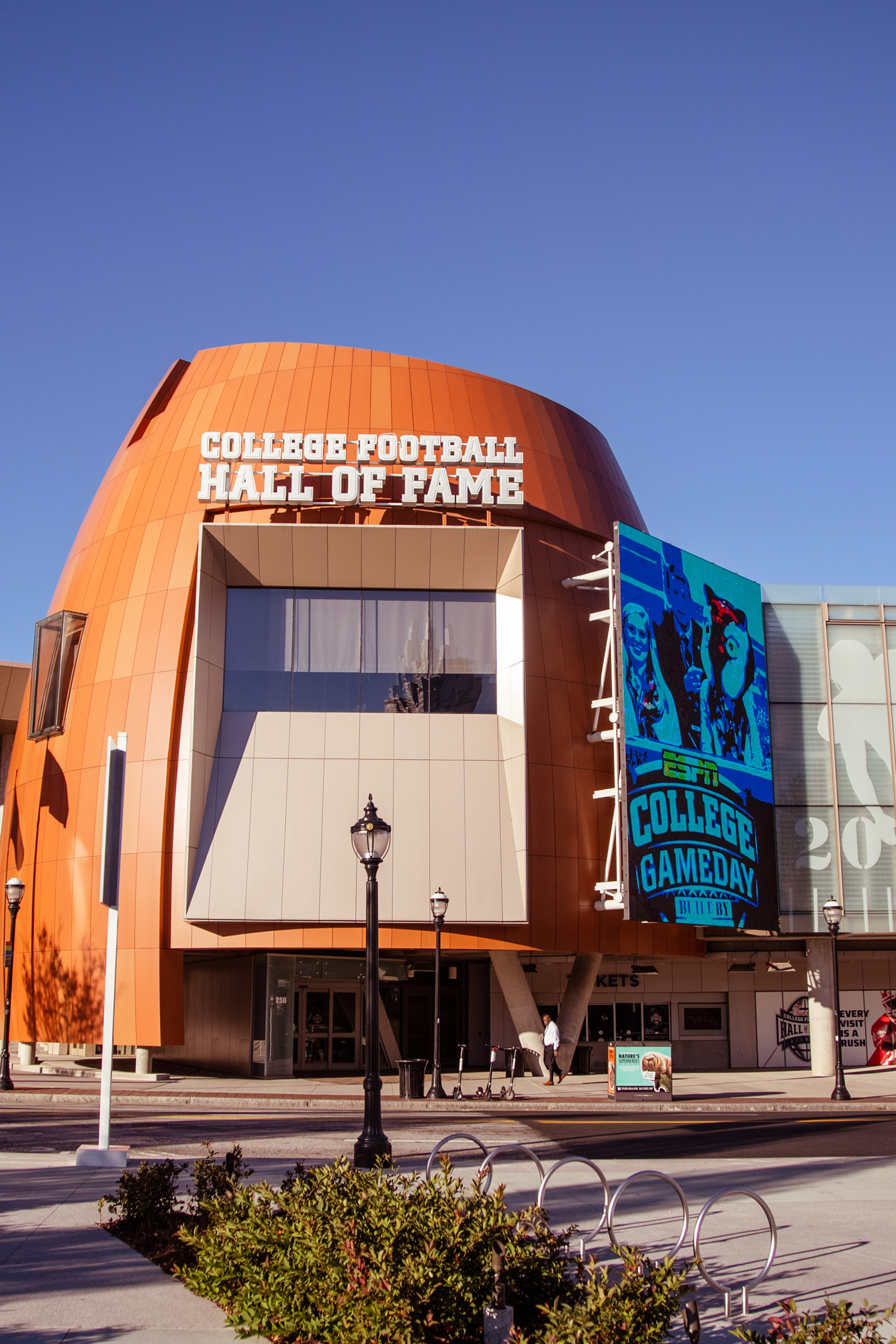 The College Football Hall of Fame and Chick-Fil-A Fan Experience.

This interactive sports museum encompasses three floors of which collage fans and the curious can explore. Among the featured displays, a helmet wall sporting school helmets of every college team in the county. Check out the jumbotron where you can catch the game.

The Chick-fil-A Fan Experience, located is the second floor. It’s been described as a playground for football fans. Sing along to fight song karaoke, make a pick at the ESPN College Game Day desk or join in for a session of virtual face painting. Or test your skill on the field by attempting a winning pass or kicking a field goal. Don’t forget the third floor. This is where the College Football Hall of Fame is exhibited. 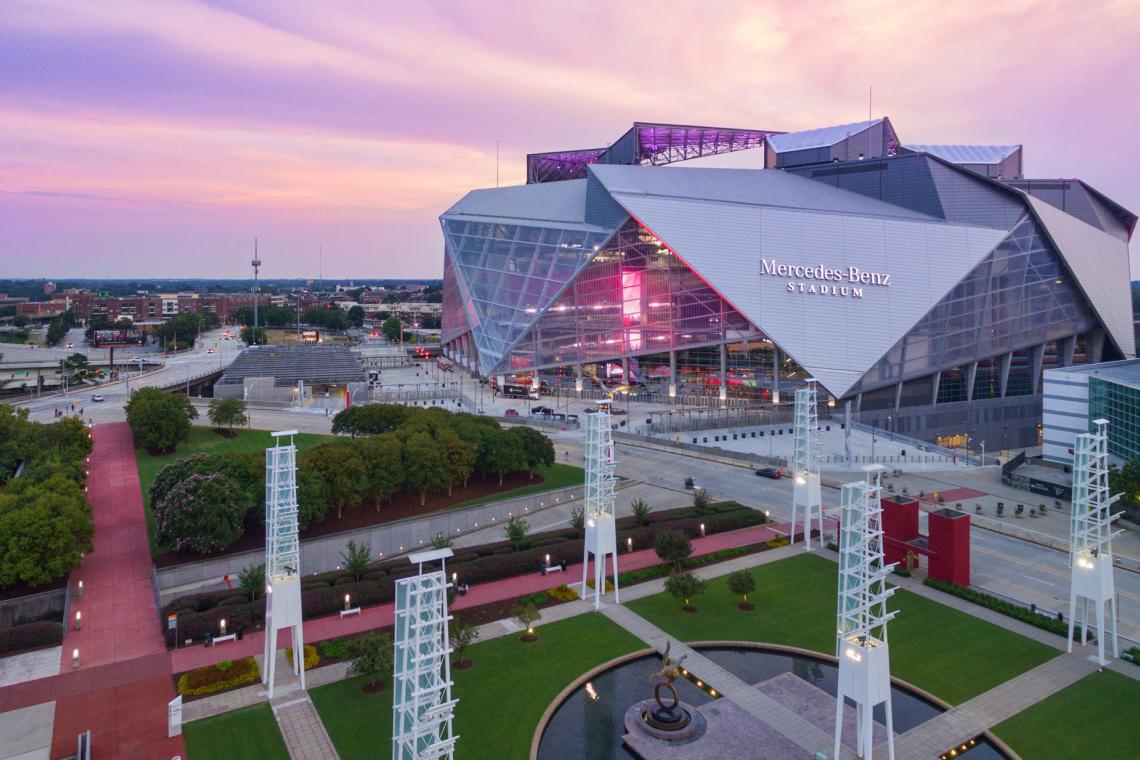 The Mercedes-Benz Stadium: Non-game days and during the off-season, take a tour of the home of the Atlanta Flacons, and the Atlanta United FC soccer team.  Inside there is a surprise; an art collection numbering over 200 pieces, curated by the Atlanta branch of the Savannah College of art & Design.  Beyond the iconic falcon sculpture perched at the stadium entrance,  the collection’s two stand out works are the Collage of Clocks and the seven-foot mural featuring early African-American league players. The tour includes a peek inside VIP lounge and locker rooms. Grab lunch inside Molly’s B’s, a southern  style chop house,  named for Falcon’s owner  mother,

SunTrust Park,  home field of the Atlanta Braves, is surrounded by The Battery. An entertainment and business complex  similar to our Ballpark Village  with shops, eateries, apartments and amusement venues.  Visitors can take a walk-up tour any day but Sunday. Stops on the tours vary, which often includes a trips to the broadcast booth and press box, batting cages, dugouts and the Braves Clubhouse.  SunTrust does offer a VIP experience on game days – a personalized behind the scenes tour and a chance to watch batting practice on the field. 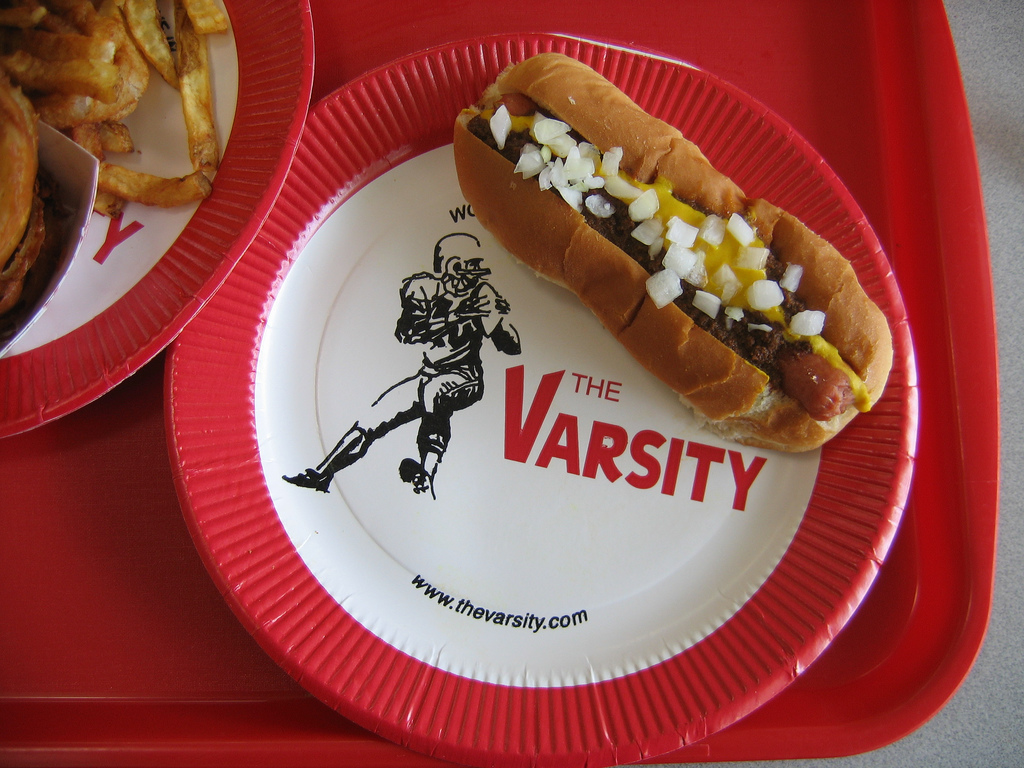 Grab a dog, with or without chili at The Varsity.

It’s the must eat place in Atlanta whether there’s a game or not. The Varsity, called American’s largest drive-in, originally named the Yellow Jacket in honor of Georgia Tech’s football team, has been renowned for hot dogs since 1928.Sharing the menu with the dogs are burgers, grilled cheese and salads along fries, rings and chips. However, it’s the hot dogs I crave. Order one of the combos. My combo picks,  two chili dogs with mustard and onion rings or the Slaw Dog duo, topped with sweet southern cabbage slaw. Just be ready to order and listen up. When it’s your turn you’ll hear, “What’ll ya have?”

Who doesn’t love barbecue. After all, barbecue and grilling has become mainstay at countless ball games and  tailgating parties. Barbecue Nation, the featured exhibit at the Atlanta History Center, takes an in-depth look at barbecue history and styles through an array of artifacts, images and oral histories. You’ll get hungry walking through the displays, which features vintage grills and pits ranging from a 1948 Char-Broil Wheelbarrow Picnic Cooker, to the GE PatioCart, the presidential pit owned by Dwight D. Eisenhower.

Don’t leave the History Center before viewing its latest jewel, the restored Atlanta Cyclorama: The Big Picture, which opens officially February 22. This 132 year old  painting stands 49 feet tall and is longer than a football field and depicts The Battle of Atlanta. Cycloramas were large 360 degree paintings, which were wildly popular in the late 19th to early 20th century. They were considered the movies of their day. Atlanta’s Cyclorama is one of only 17 that are known to exist worldwide.

Athens and Macon are two Georgia cities with sports destinations worth the drive from Atlanta – less than 90 minutes from downtown. Athens is home to the University of Georgia and it’s famed Sanford Stadium, which hosted the  soccer events during the 1996 Olympics. Plan to visit Butts-Mehre Heritage Hall and Sports Museum. A free museum where the University of Georgia athletics are showcased along with memorabilia such as Heisman trophies and items from the Atlanta Olympics.

Macon is home to the Georgia Sports Hall of Fame., the largest state sports museum in the country.  Here both amateur and professional sports from football, baseball and basketball to golf and Olympic sports are honored. The state-of-the-art museum holds over 3,000 artifacts. Before leaving Macon visit Five Star Stadium in Macon’s College Hill Corridor. This is the site where the Mercer University Bears play, whose school football tradition dates to 1892.