JUPITER, Fla. – One of the Cardinals’ best players this spring also is one of the most unknown.

Until he was sidelined over the weekend because of a rib-cage injury, Rangel Ravelo had the most at-bats, and the most hits, of any player on the team this spring.

In an age when prospects and minor-league players receive increasing amounts of attention, it’s hard for a player to reach the majors, or even a big-league spring training camp, without fans learning much about him.

It’s happened with Ravelo, however, and it might be time to start paying more attention to the 26-year-old first baseman, even if there isn’t a spot available for him on the Cardinals’ roster to start the regular season. He was not going to make the team even before suffering the injury, which occurred while he was making a lunging catch. X-rays and an MRI were negative but the injury will keep him off the field for the rest of the spring.

It isn’t now, but one day Ravelo just might be the next Jose Martinez.

Martinez played 887 games over 10 minor-league seasons before finally getting his chance with the Cardinals. This will be Ravelo’s 10th season in the minors as he adds to his current total of 775 career games.

Martinez, who has known Ravelo since they played together in the White Sox’ organization and also because Ravelo plays winter ball in Venezuela, knows that if it could happen for him, it can happen for Ravelo.

All Ravelo needs is the same thing Martinez needed – an opportunity.

‘He’s been a great hitter his whole career,” Martinez said of Ravelo. “I’ve been saying all my career you just need a chance and an opportunity. This time (the spring) has been his chance to show what he’s got and he’s doing it. This is a great opportunity for him. He’s opening a lot of eyes.”

Two of those eyes belong to Cardinals’ manager Mike Shildt, who knew Ravelo could hit (a .298 career average in the minors) but said he did not realize how good of a defender Ravelo is at first base. He committed one error all of last season for Memphis.

Ravelo appreciates how much he got to play this spring, and admits watching Martinez gives him inspiration to know that his chance to play in the majors could soon be on the horizon.

“My minor league career has been really good,” he said through the Cardinals’ interpreter. “The numbers are there, I’m just going to wait for my opportunity. When God wants me to be here I will be ready for it.”

So what is Ravelo’s story?

He was born in Cuba and moved to south Florida with his mother when he was 15. He already had relatives, including his father and sister, living in the U.S.

“My mom was looking for a better future for me,” Ravelo said. “Baseball wasn’t the main objective for us to come here, just a better lifestyle, better food, less crime, a better location. That was the main motivation to move here.

“I always wanted to come to the U.S. My sister had already been here for like 10 years. Obviously it was a tough age to come here, in high school. The culture change and all that was tough but it was a good change for me.”

Ravelo had played baseball in Cuba since he was 6 and immediately made the high school team. As a junior, scouts began to notice and he was selected by the White Sox in the sixth round of the 2010 draft after his senior season.

Thus began a baseball odyssey that has taken him from Bristol to Kannapolis, from Winston Salem to Birmingham, from Nashville to Memphis – everywhere it seems, except the major leagues.

Rangel signed with the Cardinals as a minor-league free agent just before the 2017 season. He hit .314 that year and was invited to the major-league spring camp a year ago, but saw only limited time because of a sore back. He spent the year in Memphis and hit .308 with 13 homers and 67 RBIs, helping the Redbirds win their second consecutive PCL championship.

“He pretty much did the same thing (in Memphis) that he’s been doing all spring – just hit and play a really good first base,” said teammate Max Schrock. “I’ve never seen him not hit. 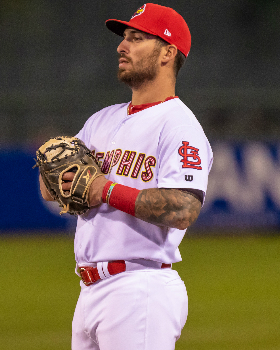 “It’s all about timing. All he can control is what he goes out and does every day. He’s a true professional, a great teammate and I don’t have a bad thing to say about him. He comes in, gets his work done and day in and day out he’s squaring balls up. He would do that wherever he is.”

Until the call from the major leagues comes one day, Ravelo will keep pursuing that dream – just as Martinez did.

“That’s why I am here,” he said. “The dream never stops. It keeps you pushing to make it to the big leagues. That’s my motivation. When God allows me to get to the big leagues I’m going to be the same guy and keep working hard. The goal is not just to get there, it’s to establish yourself as a player there.”

Here are some other players who have had impressive springs, even if they probably will fall short of making the Cardinals’ opening-day roster, listed in alphabetical order:

Chris Beck – The non-roster right-handed reliever, signed as a minor league free agent over the winter, has allowed just one run in eight innings this spring, striking out eight and holding opponents to a .154 average. Should some of the other relievers struggle, he could find himself on this year’s 1-55 shuttle between Memphis and St. Louis.

Dylan Carlson – An injury to Lane Thomas opened up more playing time in the outfield for Carlson, and the 20-year-old – the youngest player in camp – made the most of it. Already one of the top five prospects in the organization, Carlson only enhanced his status with his performance this spring.

Tommy Edman – The 23-year-old Edman emerged as probably the infield prospect most ready for the majors if there is an opening, both offensively and defensively. Primarily a shortstop, he also can play second or third and has posted a .300 average this spring after hitting .299 with 27 stolen bases at Springfield last season.

Scott Hurst – Even though he was not officially part of the major-league camp, the 22-year-old outfielder kept getting called back over from the minor league camp and performed well, even hitting a home run and posting a .308 average in 13 at-bats. Hurst had only played 14 games above low Class A in his first two years in the organization.

Evan Mendoza – Like Hurst, Mendoza also was used in several games after coming over from the minor-league camp and hit .308, playing both first base and third base. A former teammate of Andrew Knizner at North Carolina State, the 22-year-old appears ready for Triple A but might begin the year back in Double A just to get more playing time.

Jake Woodford – Set to be part of the starting rotation at Memphis, the 22-year-old right-hander has made steady progress since being drafted in the first round in 2015 out of a high school in Tampa. He pitched in four games this spring, earning two saves and recording a 2.57 ERA. A good season at Memphis could leave him as one of the leaders of the next wave of young pitchers moving toward the major leagues.