The St Louis Cardinals 2019 Home Opening Day is quickly approaching on Thursday, April 4, 2019, vs. the San Diego Padres at Busch Stadium– and no one will be more excited for that day to get here than Tara McMahon of Kirkwood, Mo.

After all the years of going to Cardinals games and even many trips to Spring Training– it’s their first home opener.

“I almost fell over when I got the tickets,” she said. “If you knew my husband he is the hardest working man I’ve ever met and he never takes a day off of work other than vacation time, so to actually skip work for the ballgame is a huge treat.”

Tara received the tickets as a gift from her husband Joe. 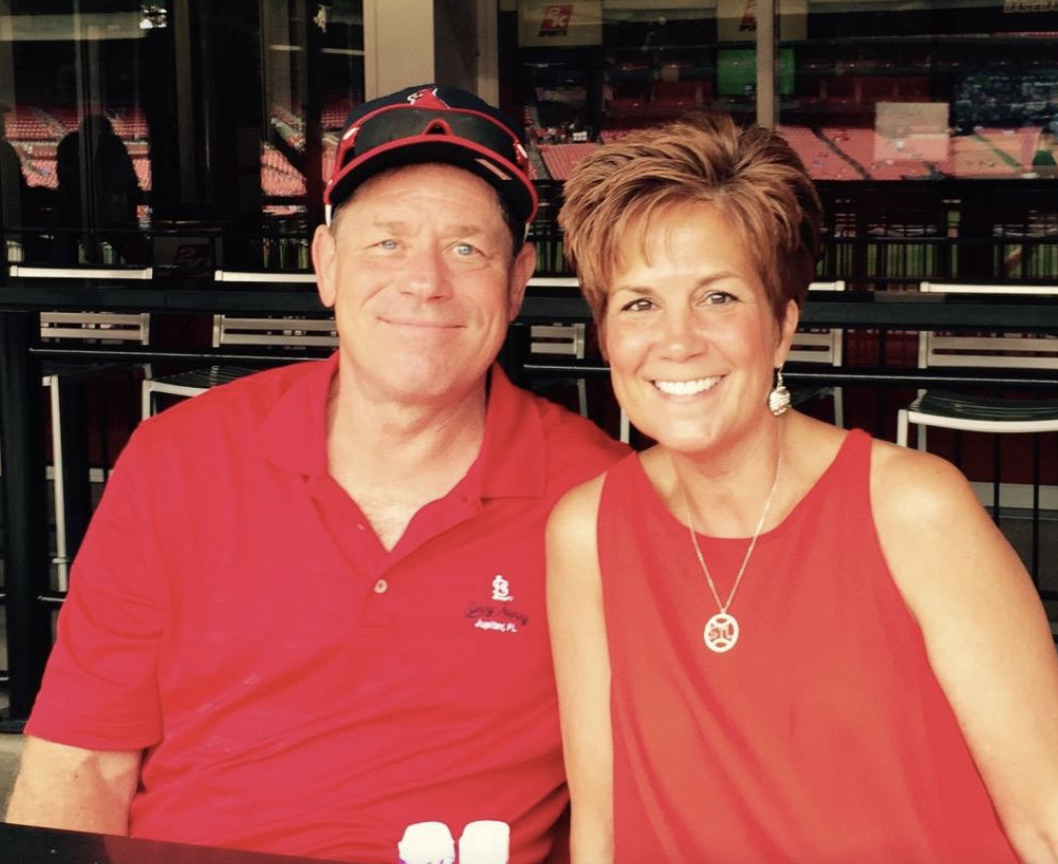 “It’s the best birthday present ever!” she said. “This present from the guy I’ve been going to Cardinals games with since 1984 is so special. I almost fell over when he told me!”

Like most Cardinals fans, Tara’s love of baseball goes way back.

“My very first Cardinal game was Stan Musial’s last game– September 29, 1963. I was a year and a half old,” she said. “My dad took his parents and I to the game. I sat in his lap in the bleachers. We ALWAYS sat in the bleachers. So I’ve been a Cardinals fan as long as I can remember– all due to my dad’s love for the Cardinals.”

Roy Schumaker was a baseball player in the Army. He was in charge of the intramural teams and managed the equipment on the base. Because he loved the games so much, she became “the son he didn’t have” and they shared baseball together. Despite her mother not caring about it, it was always playing on the radio on KMOX and he often surprised Tara at the last minute.

“Many nights growing up,  my dad would come home after a hard day and say, ‘Want to go to the ballgame?’ And off we went…sometimes just my dad and I. Since mom only went to a handful of games, I think she liked it that I was his ‘partner in crime’– and at least she knew he wouldn’t stop by the bar on the way home.”

They sometime picked up his parents.

“We’d swing by my grandparents house near Bevo Mill to pick up Grandma and Grandpa– or just Grandma after Grandpa passed.”

Roy passed away in 2015, but even to the end they were sharing their love of baseball– even when he was living out his years at the Missouri Veterans Home.

“A couple of times each year during the season Joe and I would take Gus’s Pretzels, popcorn and non-alcoholic beer for a Saturday or Sunday game and have a little party for the men in my dads unit,” she said. “We also took them to a game once a year.”

Joe McMahon did not go to as many games growing up as he was playing in many. He was a catcher and would go occasionally when the coach took him, but once the two met and the topic of the Cardinals came up on their first date– their second date was to a Cardinals game.

“Joe always loved baseball so we were the perfect pair!” she said.  “If I wasn’t at Wilmore or Forest Park watching Joe and his buddies playing, we were often at Cardinal games.”

Tara McMahon says starting with Spring Training she loves everything about Cardinals baseball and it does two things: brings back memories of her childhood plus provides happiness for her current family.

Their children Patrick and Shana (shown in photo below) also share their love of the Cardinals. 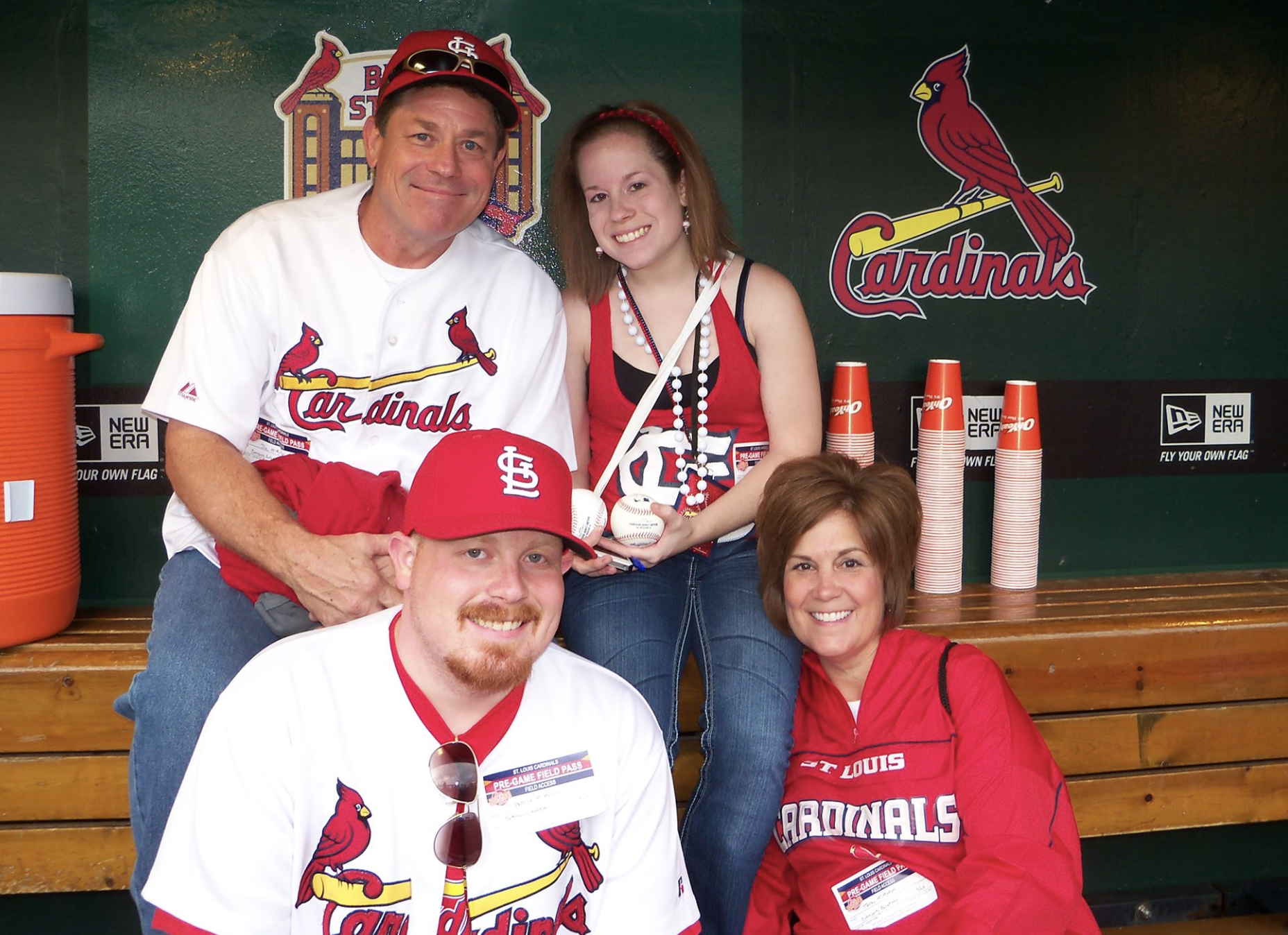 “It’s only natural that our kids live the game as much as we do,” she said. “They were in tow at games from the time they were born. If we went, normally they were right there with us. Joe’s First Father’s Day present? You guessed it-Cardinals tickets.”

So after being Cardinals fans all her life–even sneaking home from Mizzou one night to catch a World Series game in 1982– she is finally going to her first Opening Day.

“I’m always so happy when baseball season is back, and this year I get to be there for first pitch,” said Tara.

Gates open for the big game at 1 p.m., about 2.5 hours before the Opening Day ceremonies officially begin. The McMahons will be in their seats well ahead of the ceremonies as they are excited to witness the pomp and circumstance that Opening Day at Busch Stadium always provides.

“The Clydesdales are my favorite part of Opening Day,” Tara said. “Looking at our players lined up along the field for the first National Anthem of the year will probably bring tears to my eyes.”

To help out fans like the McMahons and others joining the Opening Day festivities, we’ve compiled a list of ten things for fans to know when it comes to Opening Day. CLICK HERE