UPDATE: The 2019 Cherry Blossom Festival is over but here are a couple of pictures: 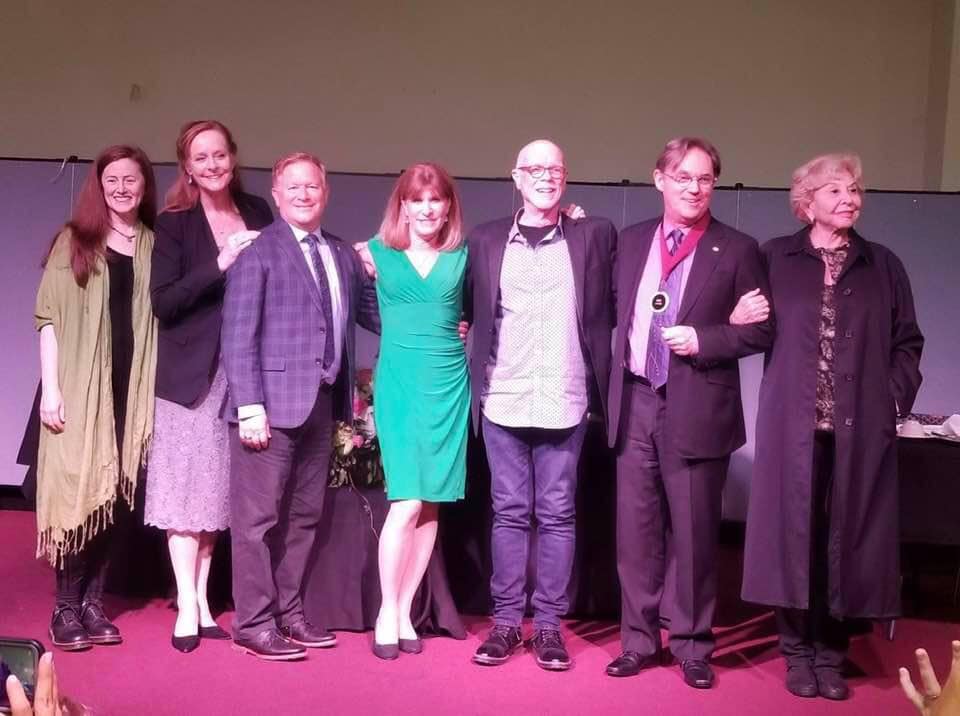 This is the Waltons cast who came to the Cherry Blossom Fest.– what they look like today. John-Boy and Michael Learned on the right end. 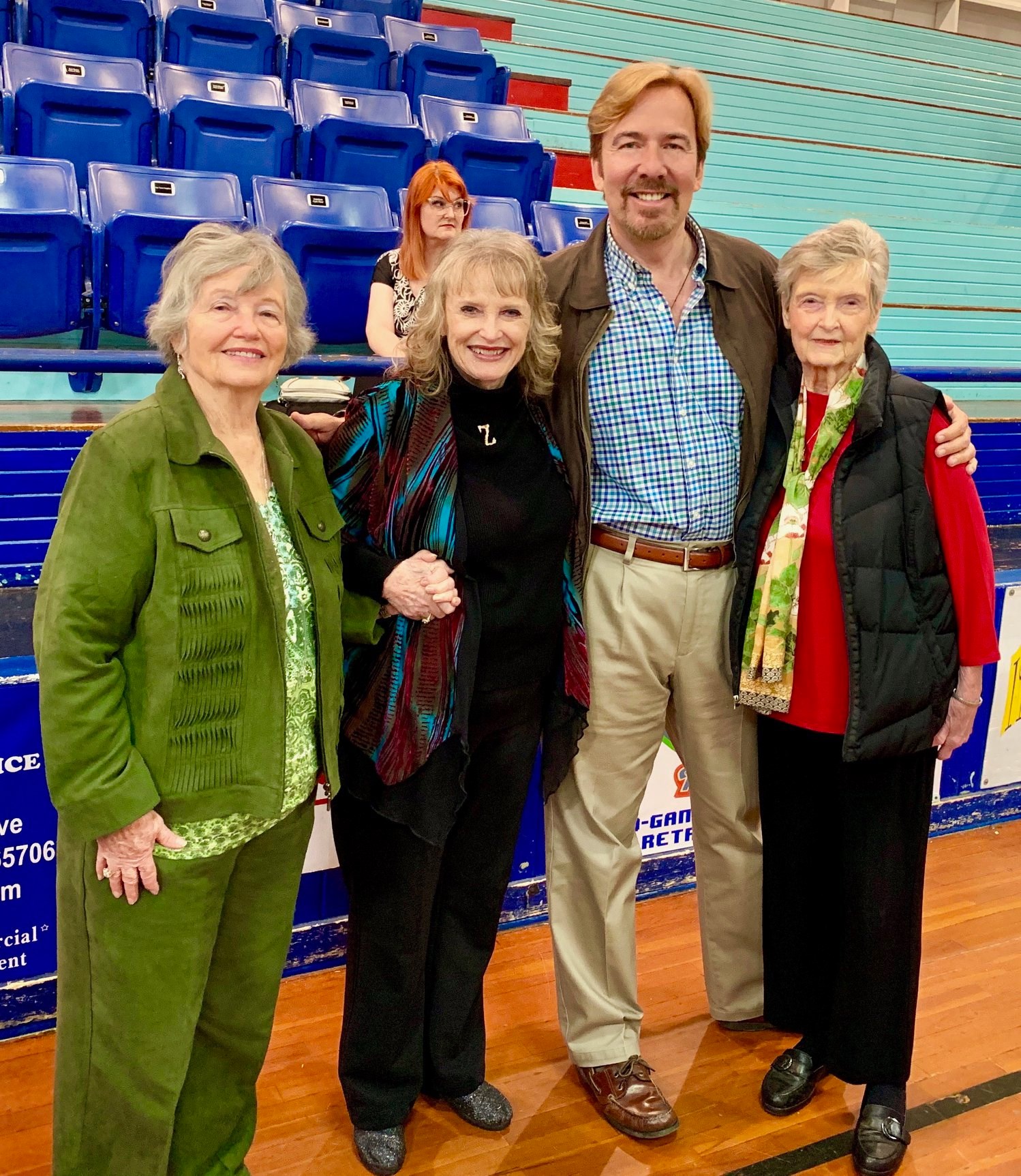 That shows the diversity of people who attend the Cherry Blossom Festival. Be sure you look for the date of next year’s fest. It’s a lot of fun.

It’s that time of year where television stars, descendants of presidents and other important historical people, as well as pop culture people– and regular folks who want to see what’s going– on all descend upon Marshfield, Mo. for the Annual Missouri Cherry Blossom Festival.  Marshfield is a tiny town about 20 minutes from Springfield. It’s an easy drive down highway 44, and for history buffs or TV fans it’s a festival like no other.

Don’t be expecting big signs all over town and a lot of hoopla. The events are held in church basements, the Community Center, the local high school and other unassuming venues. But if you don’t watch out you might bump into Lorenzo Lamas– the ’70’s heart throb who was on Dynasty and played Sandy’s “other” love interest in the movie Grease.

If you see someone who looks like John Boy Walton– it just might be Richard Thomas who is making the trip to be with many of the cast members. They will be staying at one of the local bed and breakfasts and we wonder if they’ll do the “Good Night Erin, Good Night Mary Ellen, Good Night John Boy..” routine from their respective beds just for fun. This year’s festival will be all about The Waltons.

Festival organizer Nicholas Inman’s family– and his daughter Reagan in particular– are big fans of the show. They ran a  Facebook campaign with Reagan holding a picture she had drawn on a sign that read something like “Bring Richard Thomas to the Cherry Blossom Festival.” It took them a few years of working on it but he will be there, joining Michael Learned who played his mother, and on-screen siblings, Mary McDonough, Kami Cotler, Eric Scott and Judy Norton.

There are other TV stars coming, listed below as well as what started out as the bread and butter of the festival– descendants of presidents and others. Various people who are related to the important historical figures will be there and many will appear on panels to discuss them. It is billed as the largest gathering of U.S. President descendants in the country. Regular festival goers have gotten to see and meet Laura Bush as well as her daughters, Barbara Pierce Bush and Jenna Bush Hager.

Lynne Jackson the great-great granddaughter of Dred Scott will be doing a panel, and a group of school children from St. Louis will be traveling to Marshfied for that panel.

Visitors can take a cooking class from former White House Chef Roland Mesnier, or meet Lulu Roman from Hee Haw; Karolyn Grimes, who played Zuzu,  in It’s a Wonderful Life; and Joe Yakovetic, the Disney Artist who was a finalist on the Food Network’s Halloween Wars.

The Missouri Cherry Blossom Festival features a Quilt Show, Cherry Pie Baking Contest, an autograph session where the stars will sign pictures and sell their books. Richard LaMotte, SMSgt USAF will be there as he has for the last several years, bringing the house down with his singing and he will emcee the Hubble Dinner Friday Night.

Randy Travis will even be there.  He will not be singing because of health complications due to a stroke, but he and his wife Mary attended last year and will be speaking at the Prayer Breakfast and are scheduled to be at the Hubble Dinner.

Many of the events are free, but some require a ticket. Check out their website to see all the festival has to offer. Those who make the trip once seem to return each year. The people of Marshfield are very welcoming and it is definitely worth attending some of the events.

These are the special guests that the festival is promoting, with the schedule below.

and many other historical VIP guests.

Schedule of Events– Come for any or all

11:30 AM – 1 PM- Enchilada Dinner benefiting the Fordland Memorial Library- Marshfield Assembly of God Fellowship Hall Tickets: $9, pay at the door (Brochure has a mistake on the cost.)

7:30 PM- Clifton Daniel (grandson of President Harry S Truman) brings to life his late grandfather in a one-man production on his life and career- Tickets: $25 (general admission)- Marshfield Church of the Nazarene

*Vendors on the historic Marshfield square from Noon-6 p.m.

*Nostalgia Fest Autograph Show will take place from 9 AM to 2 PM at the Marshfield Community Center. Featuring the VIP guests of the Cherry Blossom Festival, complete with a reunion of The Walton and Little House on the Prairie cast and numerous other VIPs. (Free Admission)

11:30 AM- Laura Ingalls Wilder Home and Museum Luncheon- Celebrating the 45th anniversary of the television show, “Little House on the Prairie” with a panel of cast members. Moderator, William Anderson. The luncheon will benefit the fundraising efforts of the Wilder Home and Museum- Marshfield Assembly of God Fellowship Hall -Tickets: $25, www.lauraingallswilderhome.com or 417-924-3626

***Annual Cherry Pie Contest & Auction will be held in conjunction with the Hubble Dinner. – Drop off pies from 1 PM to 4 PM at the Marshfield Assembly of God***

7:30 PM- “The Secret Veil”, a theatrical reading of the play based on the life of the last living Civil War widow – featuring Margaret Kerry, Lulu Roman, Maggie Peterson Mancuso, Reagan Inman and others – Benefiting The Randy Travis Foundation – Marshfield Assembly of God

*Vendors on the historic Marshfield square from 9 AM-3 p.m.

*Nostalgia Fest Autograph Show will take place from 9 AM to 3 PM at the Marshfield Community Center. Featuring the VIP guests of the Cherry Blossom Festival, complete with a reunion of The Walton and Little House on the Prairie cast and numerous other VIPs.

9:30 AM- Geraldine Hawkins, Presidential historian and author will speak about the relationship between Elliott and Eleanor Roosevelt—Marshfield Assembly of God

10:30 AM- “Camp David” Panel, featuring personal memories from those who have worked at or visited the famed presidential retreat. Moderator, Kevin Abney – Marshfield Assembly of God

2:20 PM- “Memories of President and Mrs. George H.W. Bush”- Personal remembrances from those who knew the 41st President and First Lady- Marshfield Assembly of God

Marshfield Church of the Nazarene