When the Cardinals hired Russ Chambliss to be one of their minor-league hitting coaches last year, they knew they were bringing in someone who had grown up in baseball and had a passion for teaching.

The knowledge that they were getting more than that came later. It turns out coaching is just one of Chambliss’s many passions.

Chambliss, the son of longtime major-league player and coach Chris Chambliss, is in his second season as the hitting coach for the Class A Peoria Chiefs, where another of his passions, making electronic music albums, has allowed him to open up a different type of conversations with the players he is coaching.

It is not unusual to walk into the Chiefs’ locker room and hear one of Chambliss’s albums playing over the speakers.

“It actually opens up a lot of communication because they see another side of me rather than being a baseball coach,” Chambliss said. “I think it’s a dynamic that really works to my benefit because the communication is a lot better. We have things we can talk about.”

Chambliss got into making music a few years ago in an effort to tap into his creative side that had already seen him write two novels, earn a master’s degree in film and screenwriting from Boston University and make several short films as well as write screenplays.

While he had always been involved in coaching at the high school or college level or giving hitting lessons after his own professional playing career came to an end, the music bug caught Chambliss at a time when he was not working in the game full-time. He was looking for a way to stay busy and engaged in projects.

“Editing was something I loved to do and I have a good ear for music,” Chambliss said. “Combined with the editing the next thing you knew I was making albums. It’s really just a hobby but come to find out I’m actually pretty good at it in my opinion.

“I had a lot of time to reflect and I got creative one day and said, ‘Let me try to make a song’ while I had some free time. It just kind of took off from there. It’s definitely a reflection of me. It’s a passion I have as well. It allows me to be creative in another way.”

Chambliss has put together six albums of electronic music over the last few years. The latest is “Cosmic Birth Volume 6” by Love Electric. It is available for download on Amazon.com.

When one of the players Chambliss has been working with this season, Nolan Gorman, turned 19 recently, Chambliss put together several of his songs and gave them to the Cardinals’ top prospect as a birthday present.

“It’s interesting,” Gorman said. “A lot of people like it.”

One person who has not been surprised by Chambliss’ success with music, or as a coach, is Chris Chambliss, who played a role in developing his son’s interests and was an inspiration to him in both areas, whether it was directly or indirectly.

“I brought him into the cages as I talked to hitters and he was able to talk to a lot of great hitters over the years,” said the elder Chambliss, who is now retired and living outside of Atlanta. “Doing that you learn a lot and a lot of that rubbed off on Russell.”

So too did his father’s love of music.

“We loved music,” Russ Chambliss said. “My mom was a professional singer and I watched her perform a lot of shows in clubs in New York. “She has a great voice. I think she was an inspiration in a sense. Music was something the family always talked about.

The combination of working for the Cardinals and the success of his music, at least from a personal satisfaction standpoint, has been something the elder Chambliss has been happy to see.

“He seems to enjoy it, and that’s really what’s important to my wife and me,” Chris Chambliss said. “Working for the Cardinals has been a happy experience for him.”

It wasn’t that long ago when Chris Chambliss thought his only child, who earned his undergraduate degree from Washington University in St. Louis, was going to become more involved in the film business than in either baseball or the music world. Russ Chambliss went to Washington University, where he majored in political science with a minor in film studies, when his dad was the hitting coach of the Cardinals.

“He made several films with some of the young people he went to school with and put together some real nice short films,” Chris Chambliss said. “I really thought he was going to go in that direction.”

While waiting for that film career to take off, Chambliss kept his hand in baseball even after his four-year playing career ended in 2000. Not working full time in the game gave him time to pursue his other interests, such as writing books. His first novel, “The Race Against Time”, was published in 2012 and tells the story of a boy, Sonny, who adopts a Greyhound dog and enters him into races to make money to pay for his father’s surgery. Chambliss’s second novel, “A Daughter’s Secret”, came out the following year and is the story of how a woman’s kidnapping forces her to reveal a family secret. Both are available on Amazon.com.

A passion for the game

While writing, and making films, Chambliss never could totally get away from baseball.

“I was more kind of dabbling in the other stuff,” Chambliss said. “I didn’t really know where I was going to go with it. I was coaching too, and baseball was always number one. It’s hard to get a full-time job in screenwriting. You can’t just say, ‘I’m out of school now. I’m going to become a screenwriter.’ It’s hard to do that.”

His passion in the sport even grew stronger as he got older and worked more as a coach. The timing was right for him to apply for the open position with the Cardinals before the 2018 season.

“When I wasn’t really in baseball it was difficult,” Chambliss said. “I wasn’t really happy, but now that I am a professional coach and working full-time I’m much happier. I’m doing something I’ve always had a passion for.”

Chambliss’s coaching style and philosophy has been developed over time through his own experiences but also from lessons he learned both by watching and talking to his father.

“There’s a lot of emotion that comes along with being a pro ballplayer,” Chambliss said. “There’s a lot of stress at times. I want to give them their space and allow them to play the game without me being in their faces all the time.

Gorman for one appreciates that style of coaching and the Cardinals have entrusted Chambliss with several of their top prospects this season. In addition to Gorman, teenagers Malcom Nunez, Jhon Torres and Ivan Herrera also are currently playing for the Chiefs.

“He just makes sure we’re ready and fires up the crew,” Gorman said. “It’s all simple stuff. With hitting you have to keep everything simple. I think the way he goes about it is really good. He’s good with seeing stuff because sometimes you can’t feel it and he’s good in that way and can point it out.”

It didn’t take long once Chambliss began working for the Cardinals for Chris Swauger to notice the job that Chambliss was doing. 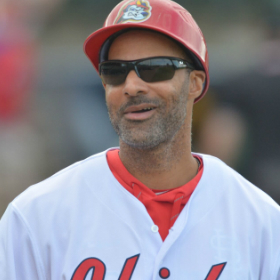 “One of Russ’s biggest assets is that he has a real passion for the game,” said Swauger, who managed Peoria last year and now is the Cardinals’ assistant minor league field coordinator. “He always brings a lot of energy and excitement. He’s extremely positive with all of our hitters, which I think is really important, especially with young hitters. He always gave them a positive message.

“When a coach shows up with energy and positivity like that, it’s really important for their development.”

Swauger remembers one day in particular when that happened because he was throwing batting practice at the time.

“One guy was kind of working on hitting balls away and letting the ball travel a little bit and he kind of got beat inside. He hit a little soft liner over first base, just tucked in inside the foul line,” Swauger said. “Russ immediately gave him a fist pump and said, ‘That’s a double, maybe a triple,’ He took a frustrating moment and turned in into more of a game situation with a good result.

“You could see the hitter change his reaction from, ‘Oh man, I got beat by that’ to ‘that’s cool.’ It’s little things like that that’s part of coaching; making guys feel good even if they are struggling a little bit.”

“We understood he had a deep resume in a lot of areas, a lot of interests. He enjoys connecting with the players, trying to make sure they develop and move forward.”

While there was an 18-year gap between the end of Chambliss’s own playing career and his return to the professional ranks as a coach, the 43-year-old Chambliss thinks that was just how his career was meant to be.

“This is the perfect time,” Chambliss said. “The experiences I have had in the past allowed me to get where I am right now. I’m actually happy with the timing of everything,”

So too is his father.

“His phone calls are just in a different world right now,” Chris Chambliss said. “We’re glad to see him happy.”

Said his son, “Now that I’ve taken it to the next level my parents have noticed the change in my demeanor. I’m much happier. I’m content with what I am doing. And I hope to get better at it.”

On the morning of the first Cardinals game, Frank Cusumano had Rob Rains on his show to talk about the team. To hear the discussion click the audio player below.   Get on our newsletter […]