Saturday June 15th at 3:05 the St. Louis Surge Women’s Basketball team takes on their opponent the Wisconsin Glo at the Washington University Athletic Complex basketball court, and if you have the afternoon open it is well worth your while. 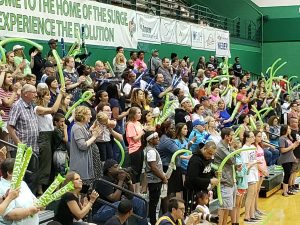 Years ago St. Louis had the St. Louis Streak of the Women’s Pro Basketball League (1979-1981) who played at the Kiel Center. They were not very well attended so when we went to our first Surge game last week we were flabbergasted to see the level of excitement. It was packed and there was a “surge” of energy that was palpable. That all makes sense since Ameren is their chief sponsor. Surge owner Khalia Collier does her best to make it all happen.

“As we Surge into the 8th season with the transition to the new league (GWBA), coaching staff and half of a new professional roster we are on track to have our best season yet,” said Collier. “With the support of the community not only supporting the Surge, but women’s professional sports!” 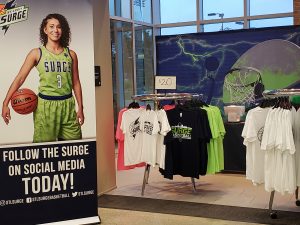 Upon entering the facility, fans are handed green balloons, and along with the many who have Surge clothes on or at least the lime green colors, the gym is bursting with excitement. 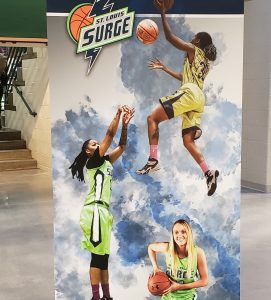 Off the court, they’ve thought of everything with banners all around. They had the balloons, they had thunder sticks. Groups of young basketball players were there as well as just older people who enjoy watching some good hoops. 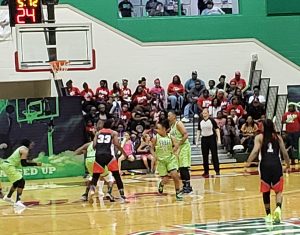 On the court the level of play was impressive. The women are good and the fans appreciate them and are yelling and cheering throughout.

One thing we noticed that was different was they play music during the game—even while play is going on—but it did add to the buzz going on in the gym. The crowd stays with the action the entire time. 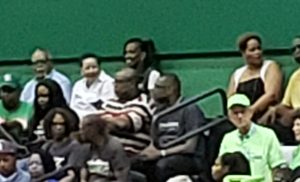 Jackie Joyner Kersee was at the first game of the season—not to perform or speak in any way—she was up in the stands in her seat cheering on the team. She stayed most of the game and appeared to be enjoying the acton.

One of the players, Brittany Carter is raising money for Rainbow for Kids with her “Brittany Carter’s Points for a Purpose.” She has devoted her season to the charity which means a lot to her and her family and has already raised more than a thousand dollars. 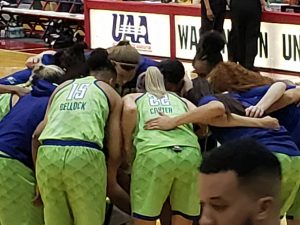 “Rainbows for Kids is so dear to my heart for two reasons,” Carter said. “I was never able to meet three of my grandparents due to them passing away from cancer, and because of the time I’ve spent with the kids.”

“The commitment of Brittany wanting to make a different speaks for its self,” said Collier.  “I love how passionate she is about giving back to such a great organization like Rainbow for Kids. What’s great about the Surge program is all of our players are committed to creating a positive impact on and off the court.” 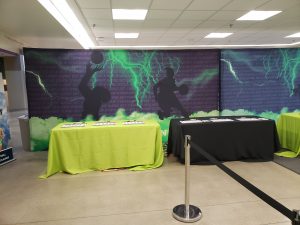 The Surge is a community-minded team and the players enjoy meeting the fans. After every game there is an autograph area set up and players come out and sign.

The owner, Khalia Collier was a basketball player herself; aa shooting guard for two years at Columbia College, then finished her basketball career at Missouri Baptist University. Besides being the owner and and General Manager, she leads the Saint Louis University Institute for Private Business.

When asked why she took over ownership of the  Surge, Collier said, “Now is the time for St. Louis to build the platform and lead the evolution of women’s sports through creative, innovative, and strategic processes.”

The Surge is definitely doing that and is worth the $15 we paid to get in. When parking at the Washington University Athletic complex parking lot, go to the fourth level and you can get off there to walk to the basketball gym.

Check out their website for more information: www.STLSurgeBasketball.com . To purchase tickets to the Surge games: CLICK HERE

Is this the first time you are seeing our site?

Our content is totally free and easy to navigate. We have a free email newsletter which often features ticket give-aways.

For the Surge’s final home game, they welcomed three special girls, plus free food for 500

Jaci, Ariana and Ashley had a great time. UPDATE:  Three young ladies from Rainbows for Kids got to spend the evening with the St. Louis Surge Women’s Basketball Team. They arrived early to meet the […]

As the St. Louis Surge Basketball Team is preparing for their 10th season, one player– Brittany Carter — aims to make her time on the court count for something bigger than basketball. Carter has started […]