What a day it was in St. Louis! Even the rain couldn’t dampen the spirits of St. Louis Blues fans.

According to KSDK the crowd “peaked at 2:30 p.m. on Saturday with about 390,000 fans downtown.” KMOV estimated it at 300,000, and FOX 2 said, “More than 100,000 Blues fans descended on downtown.” What was unclear was if the numbers were for the rally at the arch plus the others there for the parade– or just those in attendance for the rally. Some fans were not able to get into the arch grounds because they could not get close enough due to the crowd. 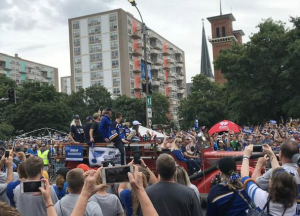 The Blues players and coaches rode in separate cars. Fans could not get enough of them and were cheering loudly from both sides of Market Street– even before the parade started. They started cheering at the beginning of the parade and their enthusiasm only increased as time passed.

Fans who were there will never forget it. 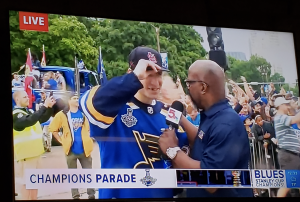 The parade was carried on four television stations including our television partner KSDK. The photo left, shows Rene Knott interviewing Alexander Steen. Mike Busch and Kay Quinn anchored the coverage as Knott and Frank Cusumano walked alongside  the floats and interviewed the players. 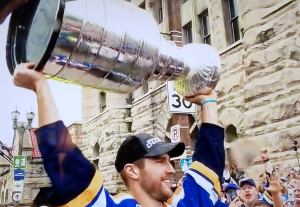 Alex Pietrangelo (shown in the photo, right) took the Stanley Cup off the beer wagon and walked around showing it to the crowd, which, of course was going nuts.

The Oakville Band marched in the parade. Blues player Pat Maroon went to Oakville and they were excited to be representing one of the players. Maroon had already shaved his playoff beard in time for the parade and enjoyed walking along greeting the fans. 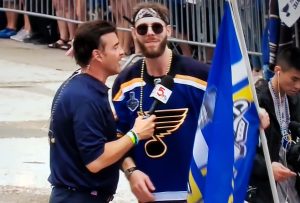 Jordan Binnington, Colton Parayko and others got out of their cars and high-fived with the fans. The photo, right is Frank Cusumano interviewing Joel Edmundson. Edmundson had the flag and started waving it with the crowd loving it.

There were so many fans downtown for the parade which prompted Kay Quinn to wonder “is anyone watching us at home?” saying it seemed like the whole town was at the parade. Many were watching it at home and it was televised on KSDK, FOX 2, KMOV, FOX Sports Midwest and broadcast on KMOX Radio. 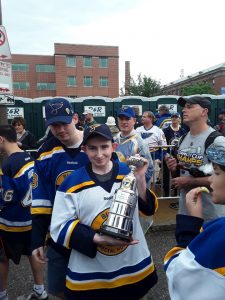 The Blues invited the Blues Special Hockey Team, the Gateway Locomotives to participate. One of the members, Brian Ott is shown right, with a mini Stanley Cup. The goal of this organization is to give people with Developmental Disabilities the chance to play the sport of ice hockey in an environment that is adapted to the level of ability which the athletes are able to participate.  In addition to hockey skills, the program emphasizes the development of desirable individual characteristics such as dependability, self-reliance, concentration, willingness to share and personal accountability.

The Lindbergh High School Spirit of St. Louis Band was also invited to march in the parade. They were up in the LHS gymnasium early Saturday morning rehearsing Pharrell Williams’ song, “Happy” and that pretty much sums up the atmosphere of the day.

One of the big surprises of the day was the Clydesdales, shown left. They were not listed on the schedule and many fans wondered why they were not going to be in the parade, but when they showed up the cheering intensified. They were pulling the beer wagon with the Stanley Cup trophy in it. 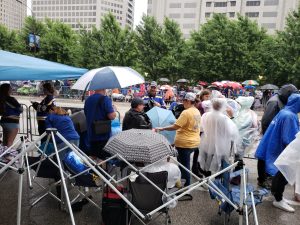 Everyone wanted to get a front row seat so starting Friday night the tents were put up and people were arriving.

By 5 a.m. Market Street was lined with tents. It was dry at that time and some fans were sleeping and some were just arriving.

By 7:30 a.m. it was pouring down rain. There was lightning and thunder. Many downtown ran for cover, many just stayed in place in rain gear and under umbrellas and tents. 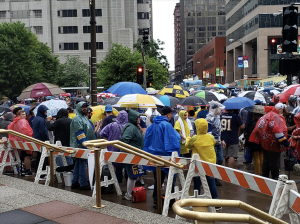 About 8:30 the rain went down to a light drizzle, giving fans hope of the clouds scattering but suddenly more rain and then a steady downfall for an hour or so. By this time people had lined the street at least six to ten deep. Fans were happy and venders were selling their blues items.

For those who could not make it down for the Blues festivities, STLSportsPage.com has a Fanatics store on our site and you can sit in the comfort of your home and browse all the Stanley Cup Championship Offerings. To access the Blues items CLICK HERE. 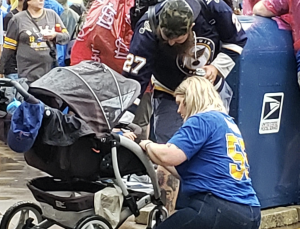 There was a great police presence, many portable restrooms and vendors. Many fans had coolers with food and drinks. At one point a service truck drove down the center of the street and honked three times after which the entire crowd erupted in “Let’s Go Blues!”

Many families came– most decked out in their Blues clothes. There were no crimes or disorderly conduct reported. It was a very orderly crowd; very happy and enthusiastic crowd.

It will be a day St. Louisans will not forget for many years to come. After all they’ve waited 52 years for it.

Audio by Mike Reeves The Blues lost 7-2 to the Boston Bruins in Game Three of the Stanley Cup Final on Saturday night at Enterprise Center in St. Louis. To hear the post game interviews […]

Jake Allen let in a goal six seconds into the second period that sent the Blues into a downward spiral and another loss on Saturday at Enterprise Center. […]

What You Need to Know About the NHL All-Star Game in St. Louis and How to Buy Fan Gear

The 2020 NHL All-Star Weekend will be held this weekend– Jan. 24-25 –at Enterprise Center. It’s the first time since 1988 that St. Louis has played host to the event. The All-Star Game, which consists […]