This past week football fans got to meet the president of the St. Louis BattleHawks, the XFL team coming to St. Louis. He announced the logo and team name. Up until this week the league had been handling everything but that has changed. 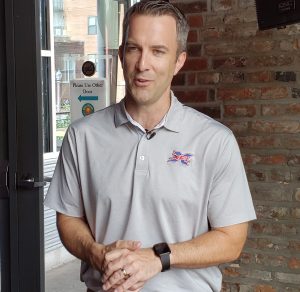 “Today is our birthday!” said G.M. Kurt Hunzeker who actually visited the newborn unit at Barnes-Jewish Hospital to celebrate the team’s “birth date” of Aug. 21, 2019 before heading over to Urban Chestnut in the Grove for a special team happy hour.

Hunzeker, most recently the Vice President of Marketing Strategy and Research for Minor League Baseball (MiLB), is a St. Louis native. 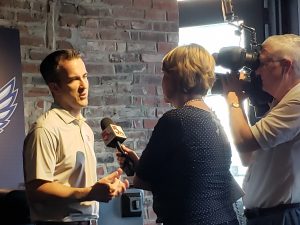 “Now that the BattleHawks’ name and logo is public, expect to see a lot of activity in the coming weeks and months as we co-author our unique brand of football fun with the St. Louis community, and prepare for kickoff in February 2020!” Hunkeker said. “We have some big news coming soon, stay tuned.”

ESPN 101 did a live broadcast of the introductory event at Urban Chestnut. Randy Karraker, Brad Thompson and Chris Rongey, shown in the top photo were on hand doing “The Fast Lane” while curious fans milled around.

The team, who will play their games at the Dome will start the week after the Super Bowl in 2020.

“Now we get to start marketing in St. Louis,” said Hunzeker. “If you think today is a big day, just watch what’s coming.” 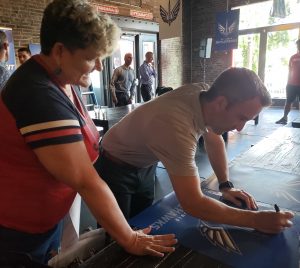 Hunzeker and new marketing director Mark Taylor as well as Brentan Debysingh the Communications manager for the XFL greeted fans and passed out BattleHawks posters. There was a good turnout of fans and media members including long-time football reporter Howard Balzer.

Jonathan Hayes, the Cincinnati Bengals tight ends coach for the last 16 seasons and a standout NFL tight end, had been named the head coach and general manager of the team earlier.

Now that the local office is about to open the BattleHawks are accepting “ticket deposits.” According to the team,  “Your deposit gives you priority access to purchase St. Louis BattleHawks season tickets before the general public. Secure your place in XFL football history today.”

After  purchase of a season ticket deposit, the team will notify fans when the seat selection process begins to secure your 2020 Season tickets.

Each season ticket deposit reserves one seat for each of the five St. Louis BattleHawks regular season home games at The Dome Stadium.

About stlsportspage 1913 Articles
For the latest news and features in St. Louis Sports check out STLSportsPage.com. Rob Rains, Editor.

The BattleHawks, led by Head Coach and General Manager Jonathan Hayes, play their first game on Sunday Feb. 9 in Dallas vs. the Dallas Renegades. Fans can catch the game on ESPN at 4 p.m. […]

BattleHawks open this Sunday on the road; putting final touches including medical staff in order

With just a few days until the St. Louis BattleHawks make their XFL debut they are getting things in order.  They play their opening game in Dallas against the Renegades this Sunday, Feb. 9. The […]