The BattleHawks, led by Head Coach and General Manager Jonathan Hayes, play their first game on Sunday Feb. 9 in Dallas vs. the Dallas Renegades. Fans can catch the game on ESPN at 4 p.m. St. Louis time.  CLICK HERE to hear the BattleHawks new theme song.

The pro football season isn’t over.  On the heels of Super Bowl LIV on FOX, more pro football is coming to KTVI FOX 2, when the XFL season kicks-off this Saturday for the newest St. Louis team: the St. Louis BattleHawks. The XFL plays their games on Saturdays and Sundays. 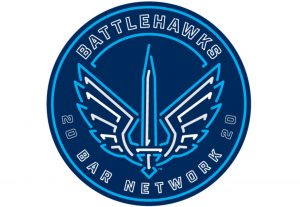 Even though the Gateway City has been without a football team for the past five years, the local sports bars have continued to be filled with football fans watching whatever is out there. The BattleHawks hope to capitalize on those already used to heading to the sports bar on the weekend, as well as add more, by setting up a  “Bar Network.” There are more than 50 bars in the Greater St. Louis Area that are planning on showing the BattleHawk games as well as other XFL games.

“These local establishments are committed to working with us to bring professional football back to St. Louis,” say the BattleHawks management. “These are the places throughout the area to go to see the BattleHawks in action. Each has their own unique flair and you are encouraged to join your fellow BattleHawks supporters at these locations to cheer on our team.

The XFL is a brand new, fan-first league that’s reimagining the game of football and offering fans an opportunity to experience more action, access and fun.

The XFL, owned by Vince McMahon, says it is designed to produce faster paced games and features former college and NFL players.

KTVI FOX 2 will carry a full season’s slate of ten games, including three games featuring St. Louis’ own BattleHawks on February 29, March 21, and March 29.  The broadcasts begin Saturday at 4 PM on KTVI FOX 2, when the Los Angeles Wildcats take on the Houston Roughnecks in Houston.   The following day, KTVI FOX 2 will feature the New York Guardians hosting the Tampa Bay Vipers at 1:00 PM.

Fans who tune into FOX’s coverage of the first game they are showing on Saturday— Los Angeles Wildcats at Houston Roughnecks –will get a chance to see the Houston team who the BattleHawks play Feb. 16. The BattleHawks don’t play their first game until Sunday and that game will be shown on ESPN.

This past week football fans got to meet the president of the St. Louis BattleHawks, the XFL team coming to St. Louis. He announced the logo and team name. Up until this week the league […]

BattleHawks open this Sunday on the road; putting final touches including medical staff in order

With just a few days until the St. Louis BattleHawks make their XFL debut they are getting things in order.  They play their opening game in Dallas against the Renegades this Sunday, Feb. 9. The […]