Dylan Pearce has been on quite a ride the last 15 months.

It started in June of 2018 when Pearce, a right-handed pitcher, helped Oregon State – the team he dreamed of playing for since he was a youngster – win the College World Series.

Fast forward to this June, when Pearce graduated from Oregon State with a degree in sociology and followed up his senior college season with a chance to pursue a career in professional baseball with the Cardinals.

The latest stop on his fun ride came on Wednesday night, when Pearce was on the mound getting the final six outs as Johnson City, the Cardinals’ rookie league affiliate, won the decisive game three of the Appalachian League championship series.

“To be able to not only win a College World Series ring, but to do it with the team I dreamed of playing for my whole life, and then to win a ring again my first year in pro ball, it’s unreal.”

Pearce found himself in the middle of some tense situations as Johnson City first qualified for the playoffs and then had to survive a best-of-three series against Bristol to get to the championship series, where they came back from a game one loss to win the last two games on the road against the Burlington Royals.

The Cardinals faced elimination six times over a nine-day stretch and never blinked. They had to win the final two games of the regular season just to make the playoffs.

“It was insane,” Pearce said. “It was a tight bunch of games. I get excited any time my name is called to get throwing (in the bullpen). It fires me up.”

A four-run seventh inning gave the Cardinals an 8-6 lead going into the eighth inning of the final game, when Pearce came out of the bullpen to work the final two innings, not allowing a hit, walking one and striking out three.

“I don’t really get nervous anymore,” he said. “After pitching at Oregon State and in the College World Series, I’ve been in so many pressure situations that was just another day for me.”

Pearce helped the Cardinals advance to the finals by getting a win in the semifinal round clincher after getting the final out to save game two. In the three playoff games he worked a total of 5 1/3 scoreless innings.

The Cardinals won the championship in part because of the efforts of eight players, who like Pearce, were drafted by the Cardinals this year and were in their first pro season.

Fletcher, the second-round pick out of a high school in Maine, was the only one selected higher than the ninth round. 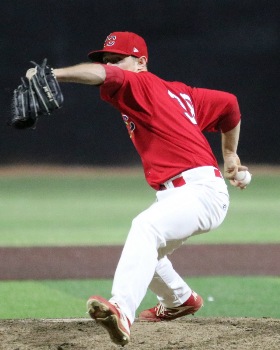 Pearce, who stands 5-foot-9, was not picked until the 31st round but he was happy because it gave him the one thing he wanted – an opportunity.

“Quite a few teams called me and asked if I would sign if they picked me,” Pearce said. “I told teams I didn’t care if I was the last pick in the last round; they could sign me for a plane ticket and a peanut butter and jelly sandwich. All I wanted was an opportunity. I don’t care about the money. I am thankful the Cardinals picked me.”

He also was thankful that he got a chance to pitch again after his first pro outing – when he allowed four runs and failed to retire any of the hitters he faced.

After that, however, the season went much better – and was capped by his playoff success.

Gary LaRocque, the Cardinals’ director of player development, knows that winning is not the most important aspect in the minor leagues. It is still something the organization is happy to see – especially for players in their first pro season.

“It was an exciting two weeks down the stretch and they played some very meaningful games,” LaRocque said. “It kept going down to the last game. They earned it, and good for them.”

This actually was the third consecutive summer Pearce has won a title. He was on a collegiate summer team in 2017 that also won a championship.

Pearce’s immediate reward after winning his latest ring was a bus ride from Burlington, N.C., back to Johnson City, where he got a couple of hours of sleep before leaving at 4 a.m. for the airport and a series of flights to take him back to his home in Oregon. He first had to fly to Atlanta, where he had a two-hour layover, then a five-hour flight to Seattle, another two-hour layover, followed by his final flight home. 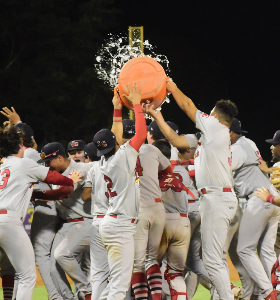 Even though Johnson City was the only one of the Cardinals’ minor-league teams that reached the playoffs this season, LaRocque saw a lot of reasons for optimism, especially among the team’s first-year players.

Here is a rundown of how some of those players fared this summer:

Zack Thompson – The Cardinals’ first-round pick was on a very limited workload schedule after a busy season at Kentucky but showed the Cardinals enough to believe that the left-hander starter could be a candidate to move very quickly through the organization next year. He pitched just 15 1/3 innings between the GCL Cardinals and Palm Beach, recording 23 strikeouts to just four walks.

Trejyn Fletcher – The second round pick was challenged with the promotion to Johnson City after just nine games in the GCL, where the outfielder could have put up better numbers than the two homers, 18 RBIs and.228 average he posted in Johnson City as one of the youngest players in the league. ‘Every player has to learn how to adjust,” LaRocque said. “The sooner that process starts to happen the better off the player is going to be.”

Tony Locey, Connor Thomas and Logan Gragg – The third, fifth and eighth round choices all finished the year in Peoria and the three pitchers turned in solid pro debuts. Locey had the best success, recording a combined 31 strikeouts in 17 innings between the Gulf Coast League and Peoria.

Jack Ralston – After a big season at UCLA, the Cardinals drafted Ralston in the seventh round and assigned him to State College, where he allowed only three earned runs in 25 1/3 innings, an ERA of 1.07, with 26 strikeouts and seven walks. He held opponents to a .135 average and was five-of-five in converting save opportunities.

Todd Lott – The first baseman from Louisiana-Lafayette was the ninth-round pick and spent the season at Johnson City. He hit close to .300 for much of the season before finishing at .250 following a late-season slump to go with four homers and 25 RBIs.

Patrick Romeri – The highest position player picked out of high school other than fellow outfielder Fletcher, Romeri – selected in the 12th round – had a good year in the GCL. His six homers tied for the third most in the league and was the second most on the team, as was his 20 RBIs.

Chandler Redmond – The Cardinals drafted Redmond in the 32nd round out of Gardner-Webb and he was one of the offensive leaders in Johnson City, slugging 12 homers and driving in 40 runs to go with a .287 average. His home run total ranked third in the league in the regular season and he followed that by hitting three more homers in the six playoff games.

Click the audio player below to watch the Jupiter Minute, a re-cap of the Cardinals game.

The Cardinals played the Marlins in an “away” game at Roger Dean Chevrolet Stadium in Jupiter on Saturday night. This information came from the Cardinals Saturday night after the Jupiter Minute was recorded: The #STLCards […]