Steven Walden is the guy painting on the main stage at the Cardinals Care Winter Warm-Up. Throughout the weekend there have been various speakers come and go, including Mike Shildt on Sunday afternoon, but all the while Walden is painting pictures.

“Would you like to grab some glasses and look at that picture in 3-D,” he asks someone admiring a picture he has painted.

Besides being colorful and hard to miss the pictures are in 3-D.

Walden’s Twitter account says, “STL therapist-turned-artist specializing in sports, pop culture & charity” and while the professions are quite different he sees them as similar. 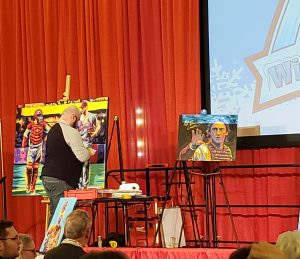 “I just found out a few years ago that I could paint,” said Walden, who was pursuing his MA in Professional Counseling at Webster University when he started being serious about his painting. “I wanted to help people by being a therapist, but now I am doing it through my art.

Though he is from St. Louis, he travels the U.S. with his new career of art. Fans at the Winter Warm-Up can check out Adam Wainwright’s charity, Big League Impact’s booth on the fourth floor near the elevator. They have been selling limited edition Steve Walden artwork, each copy signed and numbered by the artist as well as by Adam Wainwright. At this writing there were still some available but the signed artwork has been very popular so they are sure to sell out. 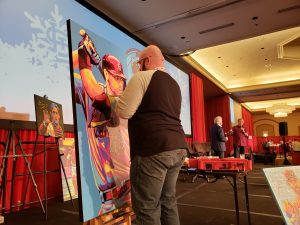 Tiffanne Becks, the Director of Operations for Big League Impact, who had worked for the Cardinals for nine years, part of those years as a Manager with Cardinals Care is the one ultimately responsible for him being at the Winter Warm-Up.

“I had worked an event where he was,” said Becks. “He works with other charities like Kyle McClellan’s Brace for Impact and he’s done some work with the Blues.”

Walden feels that working with the charities has been his calling.

“I’ve helped raise over a quarter of a million dollars in the past two years,” he said.

Wainwright’s Big League Impact charity works with other players on teams around the country,

“Steven Walden traveled with us to our Mets events,” said Becks. “He’s done some really cool pieces of the Mets players.” 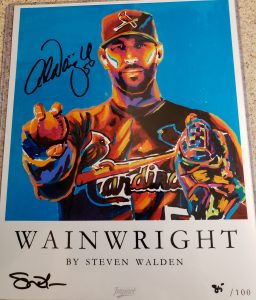 There is one picture where Wainwright is holding the ball straight out. Viewed with the 3-D glasses it looks as if he is reaching out of the canvas and pointing it right at the viewer. He will be at the Winter Warm-Up on Monday and is very accessible. He loves meeting fans and talking about his artwork.

“Do you have a brochure or information about yourself?” he was asked by a reporter.

“My brochure is me,” he said smiling.

As the Winter Warm-Up draws to a close, he finished up on a piece he was painting for the event. 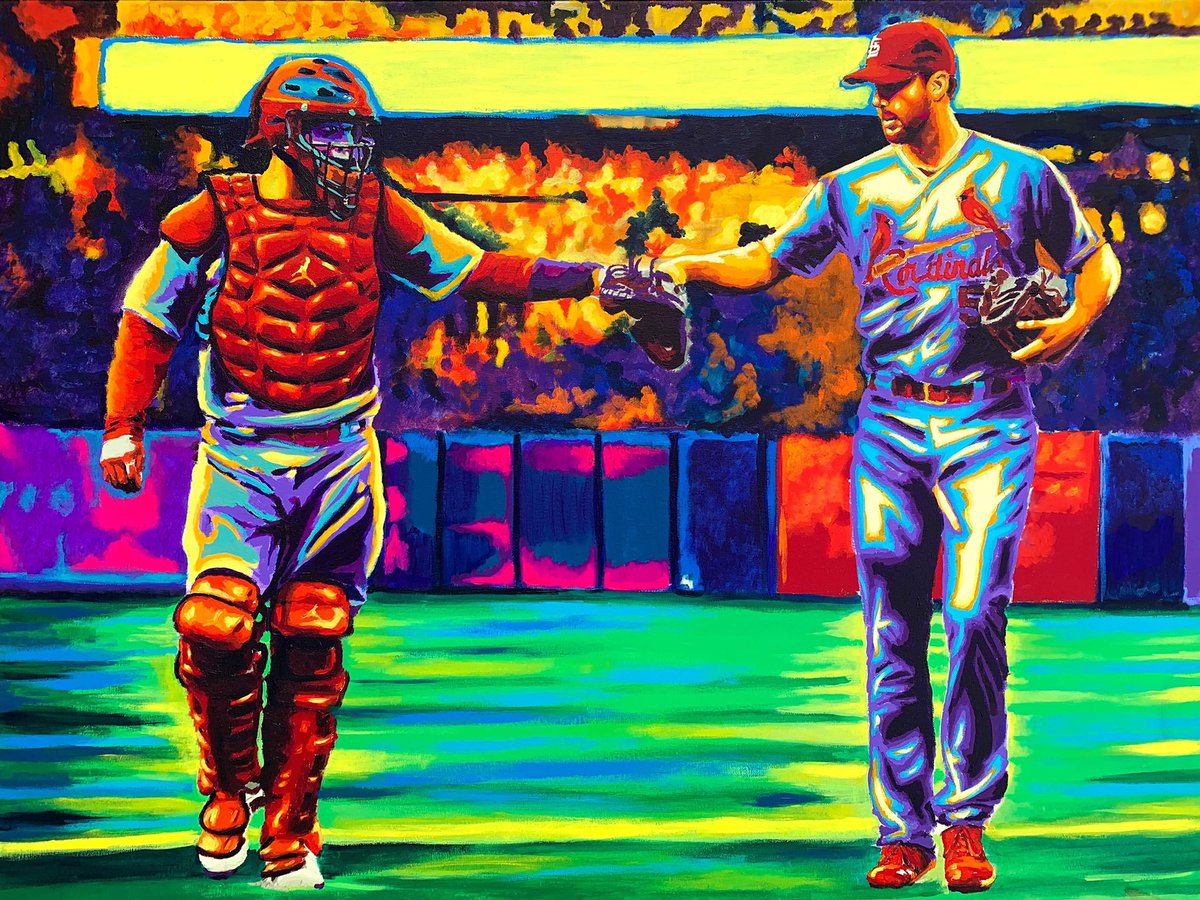 “Almost done with this “riding into the sunset” (shown left) tribute to Adam Wainwright and Yadier Molina that I will be wrapping up on stage live at the Winter Warm-Up” he tweeted out earlier this weekend.

With both Wainwright and Molina having charities, so it’s a good bet the picture will be on sale by both.