Francisco Justo is one of more than 150 Cardinals minor-leaguers who should be in Florida, finishing up spring training this week and getting ready to begin the regular season.

Instead, Justo and the rest are back at home, waiting and wondering if and when they will be able to play baseball again. And for Justo, home just happens to be in what is considered the U.S. epicenter of the COVID-19 pandemic, New York.

He has seen first-hand what is happening in New York, and still finds it hard to believe. In a telephone conversation on Wednesday, Justo said he has “never seen the city like this.”

A few days ago, Justo drove from his home in the Bronx to drop off pills for his 72-year-old grandmother, Brunilda, who is a diabetic, at her home in Manhattan.

“It broke my heart,” Justo said. “I told her, ‘Grandma, I’m going to take you the pills but don’t come outside. I’m going to drop them off at your front door.’ That honestly broke my heart. I got to see her from afar, but I wanted to give her a hug.

“I knocked on the front door and walked away. She came outside and picked up the pills. I was like, ‘I’m sorry I can’t hug you but I don’t want to get you sick.’ … Since I am young and an athlete I would say my immune system is pretty good, but I don’t want to put her at risk.”

Justo, 21, is living in the same apartment where he grew up, with his parents and older brother. All of his immediate family members are well, but others close to him have contracted coronavirus.

“My godfather, his brother and his brother’s wife were all diagnosed with the virus,” he said. “I think they are going to be OK. They are all at home. … One of my brother’s friends, who is like family, he got the virus. I got the chance to talk to him and he said he was feeling better. He said the worst part of the virus went away.”

Justo’s father, a cancer survivor, is the superintendent of their apartment building, and Justo said he has not heard of any of the residents of the 27-unit building who are sick – but he is still trying to be as cautious as possible and limit his contact with other people.

Justo drives his mother and brother to work each morning and picks them up at night. Both are considered “essential workers” because his mother takes care of an elderly woman and his brother is a psychologist.

“The streets are complete ghost towns,” Justo said. “I take my mother and brother to work to try to keep them safe. It’s crazy. Normally it takes about 30 minutes to get to my mom’s job and it takes like seven now.”

When he gets back home, Justo – who helped Johnson City win the rookie Appalachian League title last season – is trying to do what he can to stay ready when he will be able to resume his career. He had his sights set on making it to Class A Peoria this year before spring training, and the season, was suspended.

Part of Justo’s daily workout includes throwing a baseball against a big brick wall behind his apartment building.

“After I get back from taking my mom and brother to work, I watch some TV, play some video games and around noon I start doing some pushups and exercises like sit-ups,” Justo said. “Then I go outside and run a little bit in the backyard and throw against the wall. Later I take a shower and relax, play more video games, watch Netflix and go pick up my mom and brother.”

Justo knows it’s a far different routine then he would have been following in Florida.

“As a kid I always threw against that wall,” he said. “It’s been a big factor in keeping my arm loose. I don’t know when baseball is going to start again … I don’t want to go outside and contract the virus.”

Justo, a right-handed pitcher who was drafted out of a New York junior college by the Cardinals in the 12th round in 2018, has been able to get by financially because of the extension of the weekly $400 payments to minor-league players. He also appreciates Adam Wainwright’s donation of $250,000 which is supposed to go to players in the Cardinals’ farm system.

“I got the chance to have a conversation with him after I was drafted when he was in Florida on rehab,” Justo said of Wainwright. “I saw him and I was like, ‘That’s Wainwright.’ I saw him pitch when I was growing up. He’s such a nice guy… so many guys don’t have the financial ability to stay afloat during this situation. It was very kind of him.

“My parents don’t let me work because they just want me to focus on baseball, and the money is enough for me to help out my family. I want to feel like I am doing something even though they won’t let me. I want them to let me try and help out.” 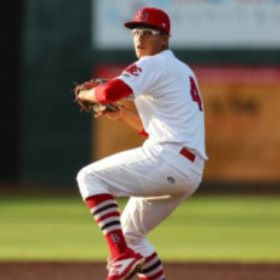 Justo, who started and won the second game of the playoffs last year when Johnson City was facing elimination, has tried to stay in touch with his friends and teammates to make sure they are their families are all getting through the pandemic. Even thought it might be worse in New York than in other locations, Justo knows it could affect anybody anywhere if they are not careful.

“Nobody is having any problems that I know of,” he said.

“Nobody knows when it is going to be over. There’s no vaccine. Especially in New York (it’s tough) because there are so many people. There are medical tents set up in Central Park. The big Navy medical ship is in New York harbor, by the Statue of Liberty. The city is trying its best to help the people.”

As his baseball dreams have been put on hold, Justo knows he, like everybody else, is facing a different opponent right now in a bigger game than baseball.

“I am worried about my baseball career but at the same time I also worry about my family and friend’s well-being. At the end of the day baseball is just a sport. As much as I love it and want to be in the big leagues one day, human life is way more important than sports right now.”