LT Aaron Jones of O’Fallon, IL has been tapped by America’s Navy for one the most exclusive assignments in the fleet – he’s one of the initial 10 gamers on the Navy’s first-ever esports team, Goats & Glory.

“It’s a tremendous honor to represent the Navy on its first esports team,” says Jones. “I never thought I’d be an esports athlete for the Navy. This really goes to show all the incredible opportunities you can find in the Navy, no matter what your interests are.”

Goats & Glory anchor the Navy’s massive new integrated esports marketing campaign that includes partnerships with leading esports entities Twitch, (visit the Navy’s Twitch channel), the Evil Geniuses, ESL, and DBLTAP. The campaign is designed to make the Navy more relatable to a new generation of young people through a shared passion for the fastest-growing sports medium in the world. 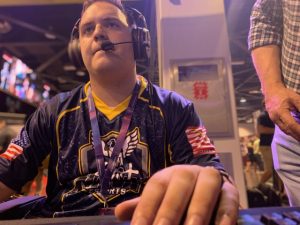 LT Jones graduated from the U.S. Naval Academy in 2013, earning a Bachelor of Science in Information Technology. He then reported to NAS Pensacola, FL for flight training in September 2013 earning his Wings of Gold in May 2015 after completing flight school training. In 2016 O’Fallon deployed onboard the USS John C. Stennis for seven months in support of Operation Inherent Resolve, as well as 7th and 6th Fleet operations circumnavigating the world. LT Jones has accumulated more than 750 flight hours and 100 carrier arrested landings, including multiple combat flights. In 2019 he joined the staff of the Naval Recruiting Orientation Unit in Pensacola. He has received two Navy/Marine Corps Achievement Medals and various service awards and ribbons.

LT Jones made his Navy esports debut in late February at DreamHack-Anaheim, one of the biggest gatherings of esports enthusiasts and competitors in the world, where the Navy was a sponsor. He competed in friendly games with event attendees throughout the weekend, sharing his personal Navy experiences.

“Esports gives us an unmatched opportunity to share what’s possible in the Navy for exceptional people like LT Aaron Jones,” says Capt. Matt Boren, Chief Marketing Officer at Navy Recruiting Command. “Esports is one of the most popular pastimes for Sailors at sea and ashore. The skillsets employed by the best gamers ­– problem analysis, risk assessment, sensory perception and quick decision-making – also propel careers in critical fields like nuclear engineering, aviation, special warfare, cryptology and counterintelligence.”

About America’s Navy
With more than 330,000 active duty Sailors, 290 deployable ships, more than 3,700 aircraft and dozens of bases in the U.S. and across the globe, America’s Navy is the largest, most powerful naval force in the world. The opportunities available in today’s Navy are as boundless as the sea itself. You can learn more about these opportunities at Navy.com, and on Facebook, Twitter, Instagram, YouTube, and LinkedIn.