As the pitching coach at the University of Arkansas, Matt Hobbs was looking forward to having a chance to work with a pair of outstanding freshmen next season ready to make an immediate contribution to the team.

The Cardinals threw a wrench into those plans on Thursday.

Hobbs watched during the second day of the baseball draft as the Cardinals used their two top picks on the day on those two righthanded pitchers, Masyn Winn from Kingwood, Texas, and Markevian “Tink” Hence from Pine Bluff, Ark. Winn actually was selected as a two-way player, having also excelled at shortstop, and the Cardinals said they intend to let him try to do both at least at the start of his career,

The Cardinals will still have to sign both Winn and Hence to keep them from showing up in Fayetteville in the fall, but Hobbs is realistic enough to know that is probably what’s going to happen.

“I think you’re just happy for the kids,” Hobbs said Thursday night. “Now they have a decision to make. You’re always happy when guys get an opportunity to do something special. Playing at Arkansas is special and playing for the Cardinals is special. Both opportunities for them are great paths.”

Both Winn and Hence – who also happened to be teammates on a travel team, the Arkansas Sticks, last summer coached by Cardinals scout Dirk Kinney – had committed to Arkansas before Hobbs joined the Razorbacks’ staff but he has had multiple chances to watch both play and to talk with them.

He came away impressed.

“They are both wonderful kids and incredible competitors and good people,” Hobbs said. “Obviously very talented. They have the world in front of them, with either decision. They’ve spent some time together playing.”

“He has a power-finesse combo,” Hobbs said. “He is a really tough kid and just basically attacks the strike zone and hitters. He is very aggressive. He does all of the things you would want a pitcher to do really well. He controls the running game, he can field his position, he’s very athletic. He’s just one of those special talents.

“He would have been a definite two-way guy in the SEC.”

John Mozeliak, the Cardinals’ president of baseball operations, knows it will be unique if Winn can do that in the pros but he wants to see him try.

“When you think about either skill, hitting takes practice,” Mozeliak said. “From a pitching standpoint it’s like repetition. The modern game, the modern player, being experimental or at least open-minded to it is something that we would like to at least try.

“I heard this was who we were taking and was looking at more of the video. At first I was thinking let’s just take the safe route and send him out as a shortstop, and then as a pitcher, he’s electric. I don’t know what the right answer is, but the Cardinals are going to try to find the right one.

“He is clearly a very special player. Candidly I can’t wait to see him in real life. He’s going to be fun to watch.”

Winn, who originally committed to Stanford before switching to Arkansas, was suspended for the first 12 games of his senior season because of a team infraction and played in only one game before the season was wiped out because of the coronavirus pandemic.

Randy Flores, the Cardinals’ assistant general manager and scouting director, said the team was satisfied that the issue which led to the suspension was resolved and said the team was comfortable with how he handled the situation.

“He is a very unique baseball player,” Flores said. “If you watched him play the field you would give him high marks and be excited by his athleticism, his hands, his skill set, his bat speed. And then if you watched him take the mound you would be equally impressed.

“The game is changing. We’re seeing examples of people doing it in the major leagues. Who are we to stop it at the minor-league level? Let’s see how he handles the transition as a two-way.” 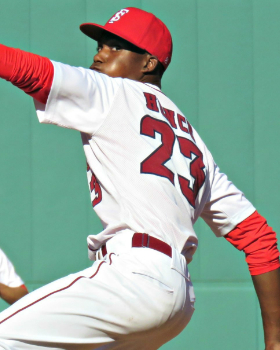 Hence is one of the youngest players in the draft. He won’t turn 18 until August. He posted a 0.64 ERA as a junior with 61 strikeouts in 43 2/3 innings and then followed that up by not allowing an earned run in 18 innings, striking out 41 with just four walks, for his summer travel team. He also only pitched in one game as a senior.

“Really, really polished pitcher,” Hobbs said. “Three pitches, two different things he can do with his breaking ball, and his fastball is special. It’s funny, you watch him throw and you think, ‘He’s not throwing that hard,’ and then you look up on the board and it’s 95.

“Tink is just a winner. You look at all of the big games his high school played or his summer team played and he pitched in a lot of those games against some really good teams. He found a way to win those games.

There was some talk before the draft that Hence could be selected higher than the 63rd overall pick, but the Cardinals were glad he was still on the board at that point after taking Winn with the 54th overall pick.

“There is such a ball of clay to begin and work with,” Flores said. “He is so young that when he has this type of feel for his breaking ball and you can see his body and his physicality improving over the fall; the leaps that he had made, there was belief that his best days are ahead.”

Hobbs already had a reason to pay attention to the Cardinals farm system. He was the pitching coach at Wake Forest when prospect Griffin Roberts was there, and the two have remained close. Now he likely will have two more pitchers to watch as they develop.

“No matter what they do I will be really excited for those kids,” Hobbs said. “If they are with us that’s great. If they decide to sign I will follow their careers closely. They are both great kids. They could have come in right away and done some great things for us.”

The Cardinals had six picks on Thursday after opening the draft by choosing another high schooler, third baseman Jordan Walker, with their first-round pick.

Here are summaries on their final four picks of this draft, which was shortened from 40 to five rounds because of the pandemic:

Alec Burleson, an outfielder/lefthanded pitcher from East Carolina – The left-handed hitter was a two-way player in college but is a better hitter than pitcher. He was the 70th overall selection in the draft, the second of two bonus picks for the Cardinals between the second and third rounds (the result of Marcell Ozuna signing as a free agent with the Braves). Burleson, who also can play first base, posted a .341 average during his college career, including a .370 mark in 2019l

Levi Prater, a lefthanded pitcher from the University of Oklahoma – He made four starts for the Sooners this season before the pandemic shut down the season after going 7-4 in 2019. He pitched in seven games in the Cape Cod league, posting a 0.91 ERA. The Cardinals’ third-round pick, Prater lost three fingers on his right hand in a lawnmower accident when he was two years old.

Ian Bedell, a righthanded pitcher from the University of Missouri – Bedell was selected in the fourth round, the 122nd overall pick in the draft. After pitching in relief in 2019, he made six starts in the Cape Cod league last ummer and posted a 0.58 ERA. He followed that up this spring by moving into the Tigers’ rotatoion and recorded 35 strikeouts while issuing only four walks in 24 innings. He is young for his class, just 20 years old, after graduating high school early.

L.J. Jones, an outfielder/first baseman from Long Beach State – The final pick of the Cardinals, in the fifth round, Jones was off to a good start when this season was stopped, hitting .327 with two homers in 14 games. That came after Jones played in only two games in 2019 before his season ended when he was hit by a pitch and suffered a broken hand. He was announced as an outfielder but also played first base in college.