The traditional baseball phrase “scoring at home” has taken on an entirely different meaning this season.

In years past, the phrase has usually been spoken by radio or television announcers to instruct fans who like to keep track of the play by play during a game whether a play has been ruled a hit or an error.

For people like Gary Mueller, whose job it is to make those decisions as an official scorer for the Cardinals, the phrase has literally become his job description in this pandemic season of baseball.

In an effort to limit the number of people in the press box, Major League Baseball decided before this season began that the official scorers would work from home, watching the game on computer monitors, instead of being at the game.

Mueller, a retired St. Louis Post-Dispatch sportswriter and one of three official scorers who work for the Cardinals on a rotating basis, said the transition has not been as difficult as some might have expected.

“Believe it or not I like it,” Mueller said. “In talking with other scorers and some other people they all thought it was a crazy idea. I was probably one of the more outspoken ones in conference calls. I was for it.

“When I talked to other people, I kept harping on the point that if you think about it, your biggest job is making the judgment call between a hit or an error. When we are scoring in person, what’s the first thing you do? Look at the replay. Can it be done off video? Well, it really is.”

Mueller has scored games for the Cardinals for the past 21 seasons, a total of 723 games, and before that he worked for a dozen years in the scoreboard room. That makes this the first summer he has not spent at Busch Stadium in more than 30 years.

While he misses being at the ballpark, being able to stay home and still do the job has so far been an enjoyable experience. He is becoming more comfortable with the new setup with every game he works.

Mueller first heard about the possibility that the scorers would be asked to work from home instead of at the ballpark when negotiations were going on between the players and the owners before the start to the season.

Another official scorer, Tim O’Driscoll from Milwaukee, had an adult daughter who tested positive for COVID-19 and he and Mueller talked about the situation.

“We both said to each other, ‘I’m not sure I want to go into a ballpark,’” Mueller said. “I hadn’t made a decision, but I probably would have opted out, that was my own personal feeling. I don’t have any health conditions but at my age I just don’t think I would feel safe.

“I was definitely on the side that if we can do this from home, let’s do it from home.”

When Mueller is scoring a game, he has two laptops set up on the desk in his home office. One has what is called a “clean feed” which is the same video that airs on Fox Sports Midwest broadcasts, but it is about 10 seconds ahead of the broadcast and is free from commercials and graphics. He also has the ability to switch the video feed to one that comes from a stationary camera high behind home plate that shows the entire field. Before the season began he had to run a test to make sure his internet speed was fast enough to handle the video feeds and the work load.

On the second laptop Mueller has a program called a simulator. 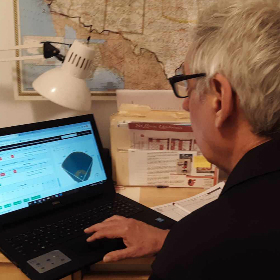 “It’s a graphic representation of where everybody is on the field,” Mueller said. “There are dots where the fielders are, and after a play I can go back and click on it and see where the shortstop was or any fielder. It’s useful on rundowns or to see who made a relay throw or where the runner was. Another dot shows the ball. How in the world they do this I don’t have a clue but it’s really very clever.”

On that second computer Mueller also is connected through an instant messaging program to the two people in the press box who keep track of the timing of games for Major League Baseball. They tell him when there are defensive changes or other things happening which he might not see right away on the video feed.

“The two guys at the ballpark are the key to this really working,” Mueller said. “They are my eyes and they tell me when something happens.”

When there is a play that Mueller needs to rule on he can watch the replay several times before having to make the call – which really isn’t any different than what he would be doing if he was at his normal seat in the front row of the Busch Stadium press box.

“When you watch a game in person you see a play and you go, ‘Oh that’s a hit,’ or, ‘That’s going to be an out.’ You kind of know ahead of time that either, ‘He screwed that up’ or, “Wow, he made a great play.’ Now, it’s not as clear a distinction about whether it’s a play that should have been made.”

In a game on the first weekend of the season, Mueller was scoring when Josh Bell of the Pirates hit a smash toward Tommy Edman, who was playing third base. It was up to Mueller to decide if Bell got a hit or if he charged Edman with an error.

“I knew it was hit hard, so I flipped to a second angle to try to see how much time Edman had to make the play,” Mueller said. “Eventually I called it an error. Had I seen it in person, I don’t know to this day if I would have called it the same way.”

Mueller’s basic philosophy on making those decisions always starts by trying to answer the same question: Was this a play that a major-league defender should make?

Some of the factors which he has to consider as well are if a throw pulls the first baseman off the base, where was the runner at the time? Did the fielder try to rush his throw to account for the speed of the runner? Did the defender make an ordinary effort to field the ball?

For years, when an official scorer wondered if he had made the correct call, he could go into the locker room or the manager’s office after the game and get their input and then decide to keep the call the same or change it. Those visits stopped several years ago.

“I guess there were enough places where people got hostile about it,” Mueller said. “I used to enjoy those conversations, especially with Tony La Russa.

That conversation has stayed with Mueller years later, as did something former Cardinal Fernando Vina once said to him in a conversation about Vina being charged with an error.

“I made the mistake of saying something like, ‘Well I saw the replay after they slowed it down’ and he said to me, ‘The game is not played in slow motion,’” Mueller said. “He’s right.”

Now, when a player or a manager wants to question a scoring decision, there is an appeal process run through the league office.

Players, of course, are not the only ones Mueller has heard from over the years if somebody believes he has made the wrong call. That has led to some more interesting conversations now that he is doing the job while sitting in his house in Illinois.

“I’ve got a couple of neighbors and friends who every once in a while were critical of some of my scoring,” Mueller said. “Now they say, ‘How can you do this at home?’ I said, ‘You’ve been doing it from home for years and haven’t been a bit bashful about it.’”

There is at least one difference that Mueller has noticed so far this season, however, about working from home.

“One difference I have found is that you really have to watch intently more than you do in person,” he said. “There shouldn’t be any difference, but I know if I am there with a whole bunch of people around me and there is a stolen base attempt on a ball in the dirt, I can ask, ‘Was he going or did he go after the ball hit the dirt?’ People sitting there can tell me, ‘he was going’ if I didn’t see it.

“Here you do feel like you are on an island. You’re out there alone. If I miss it and don’t see something there really is nobody I can ask except to send an instant message. I find myself focusing on every pitch.”

One question that Mueller has asked himself and others, so far without a good answer, concerns one of the yet-to-accomplish items on his baseball bucket list.

“I estimate I have worked close to 2,000 major league games between working in the scoreboard room and now as an official scorer and I’ve never seen a no-hitter,” he said. “I always make it a joke. I don’t know for how many years as soon as both teams have a hit I will turn to whoever is sitting around me and say, ‘Well maybe next game.’ That’s my standard line.

“But now, the question is, if I score a game this year and it turns out to be a no-hitter, can I say, ‘I’ve seen a no-hitter?’”