Fans watching televised sports broadcasts have come to expect certain people they expect to see in the stand. Ted Drewes and his wife were often seen onscreen, sitting behind home plate at the Cardinals games.  For many years at Houston Astros games there would be George H.W. and Barbara Bush watching.  With Dodgers’ games you would see Larry King and Entertainment Tonight’s Mary Hart. Now, watching the Cardinals television broadcast you never know who you will see—and that includes dogs, Clydesdales and even Santa Claus.

MLB’s “no fans” rule didn’t stop Martin Coco and the tickets sales department from filling up the stands. Savvy fans who scan the crowd on the television broadcasts of the games will see famous and not-so-famous people as well as fictional characters.

“Our first 200 or so cutouts were internal — Team Fredbird, Cardinals alumni and a mix of players families,” said Coco. “Almost every player on the 30-man roster back in July was represented, some with as many eight or 10 family members. My family is even in the seats.” 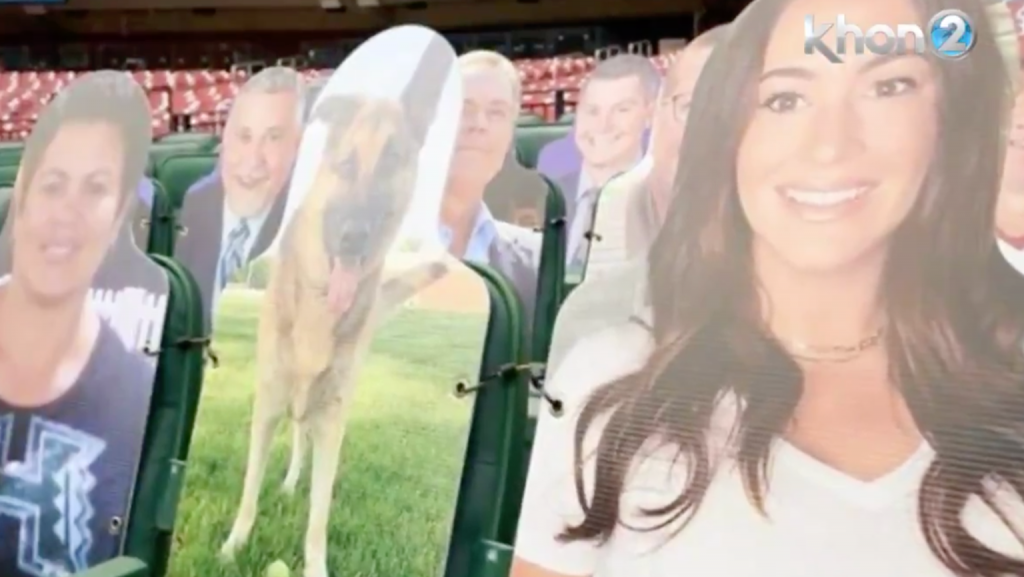 If you are saying to yourself “I see dead people” as you watch the games, you are right. We previously chronicled how Kolten Wong was proud to play in front of his mother, who was deceased. Since then we have learned that manager Mike Shildt’s mother, who died this past year is also in the stands. The photo right, shows Wong’s mom, his dog, and his wife.

And speaking of the departed, on the day of Lou Brock’s funeral, a cardboard 1970’s version of the Cardinals Hall-of-Fame base stealer was sitting right behind home plate. He had a black ribbon on his uniform—for his own death. Next to him sat the black and whlte cardboard versions of Stan Musial and Red Schoendienst. In another section their older and full colored selves watched the game. Not far from the younger Hall-of-Famers sat Santa Claus. There he was on the second row—and never a mention of him in his heavy winter coat from the television broadcasters. 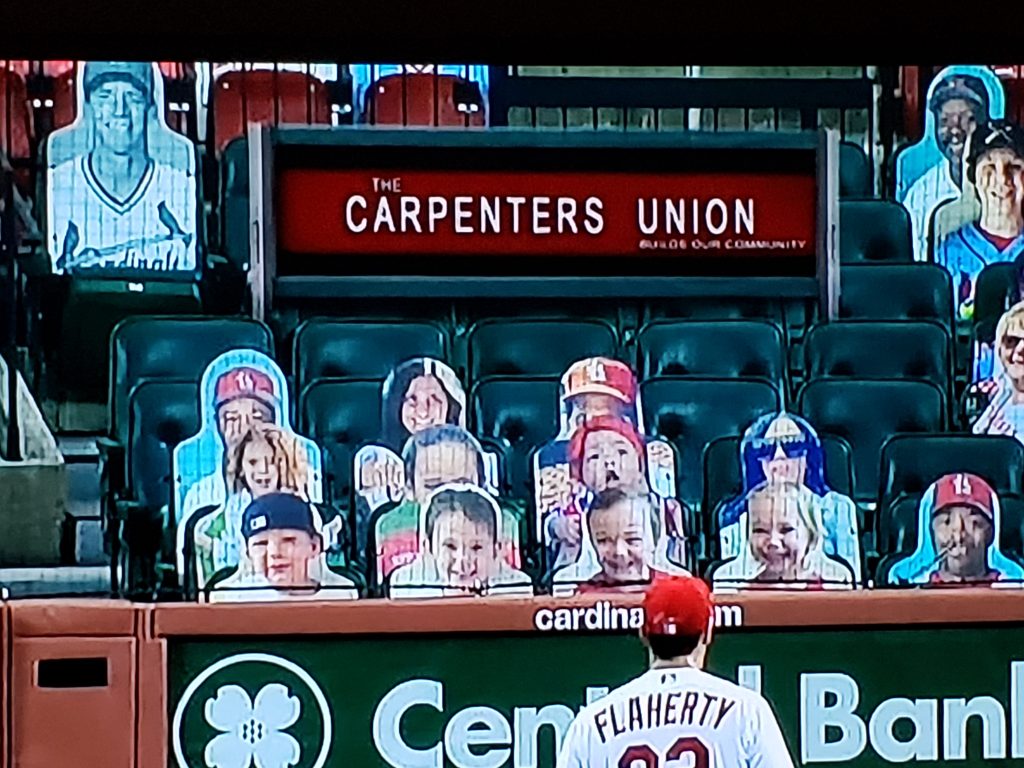 Someone must really be getting a kick out of themselves as they set up the cardboard fans. It’s called “Cardboard Nation” and you never know who you will see in the stands. Keeping up with the Cutouts is a huge job because if you look closely they are moved around every day.

You might be surprised to know that moving the cutouts is a union job. The Cardinals have their in-house, members of the Carpenters Union doing the installation. They do all the set-up and also move them around when needed.

Earlier in the season the team advertised that people could buy their own cutouts.

Here is what the Cardinals posted on their site to drum up business for the cardboard cutouts:

“While we can’t be at Busch Stadium to cheer on the Cardinals just yet, we’ve got the next best thing: CardBOARD Nation!  For just $70, CardBOARD Nation is a 2D version of you that we’ll put in the seats of Busch Stadium for the 2020 season. Deck yourself out in red, snap a photo and upload it, and be part of history as one of our first “flat fans.” Your family and friends might spot your smiling face on TV. Proceeds will benefit Cardinals Care and support their efforts in helping kids in our community. There will be a $25 per order fee added for the shipment of your CardBOARD Nation cutouts following the end of the 2020 season.

It must have exceeded their expectations,  as their website says the program is sold out. 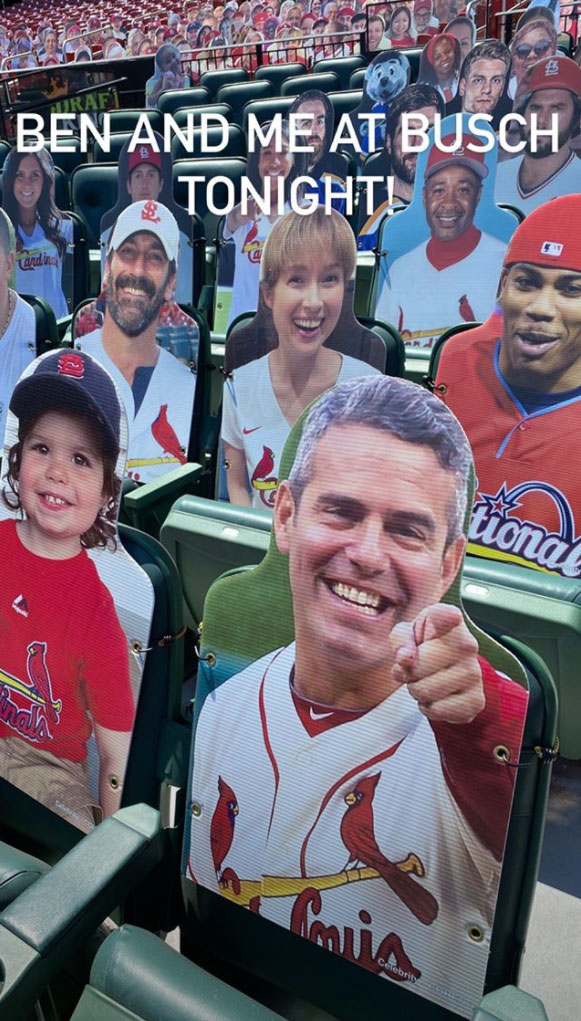 “We sold just shy of 6,000 cutouts, and all are installed in the seats as of today,” said Coco. “We are very pleased with that response, once again Cardinals fans over-delivering in support of the team.”

The first day Cardboard Nation was in business, fans saw St. Louis rapper Nelly and St. Louis native Bravo TV mogul Andy Cohen. There was a smattering of children in the front rows behind home plate and each day fans could see someone had moved the cut-outs. One day Nelly was in front of Andy and the next day Andy was moved to the front.

Andy Cohen has posted numerous times on his social media channels, including the Instagram picture shown left, that he’s “sitting behind home plate.” There have also been social posts from others including Kenny Wallace, John Daly, Brad Underwood (Illini MBB coach) and Ellie Kemper. 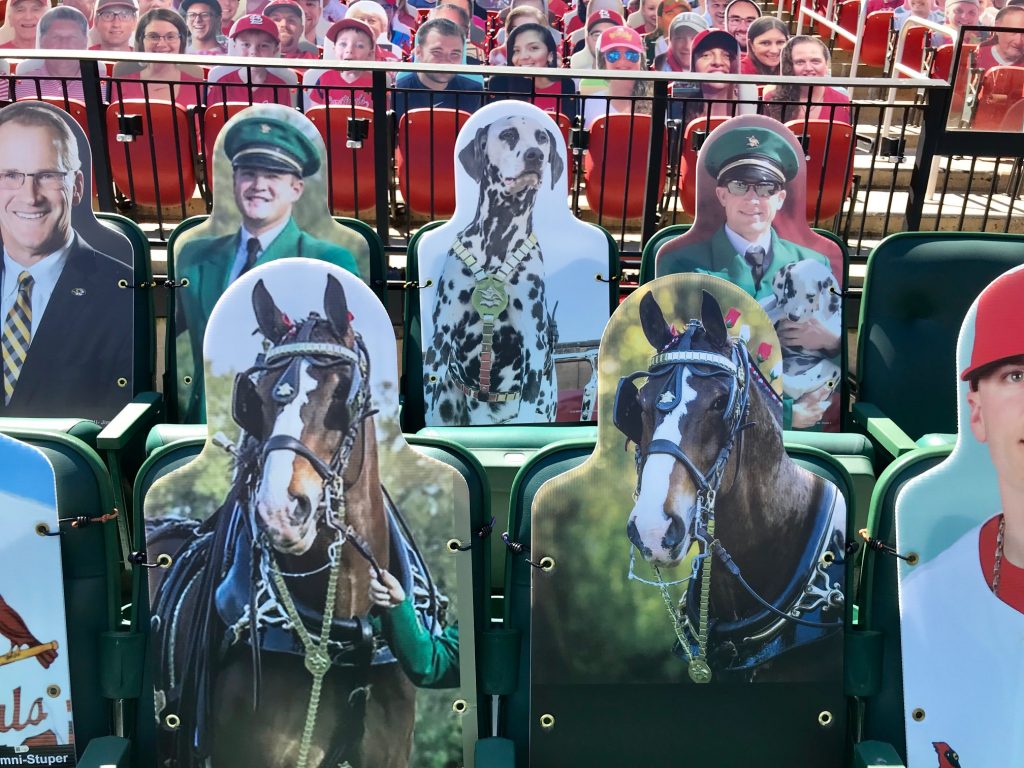 “We have tried to mix in a lot of celebrity fans and other recognizable faces in the TV shot, where fans watching at home can take a look and see who’s back there game by game,” said Coco “My favorite behind home plate was the Clydesdales for a few games. We had two horses in front, then the two drivers and Dalmatian directly behind.”

The photo, right shows the Clydesdales, they are seated as if they are driving through the balpark.

“We assigned (the cutouts) seating based on date of purchase, first filling the Cardinals Club seats, then field box seats within the baseline,” said Coco.  “We have since expanded to Big Mac Land, the Bleachers, and the Right and Left Field Box in fair territory over outfield wall”.

Once the cutouts are installed they stay put, with the exception of the green seats (Club seats) directly behind home plate, which are the primary on-camera shots during games. The Cardinals change those out every game to keep the look fresh on television. So far, the ones seen behind home plate change every game have been a mix of Cardinals alumni, celebrity fans, and general fan purchases.

Cardinals employees had the opportunity to purchase a cutout and around 300 were sold to internal staff. 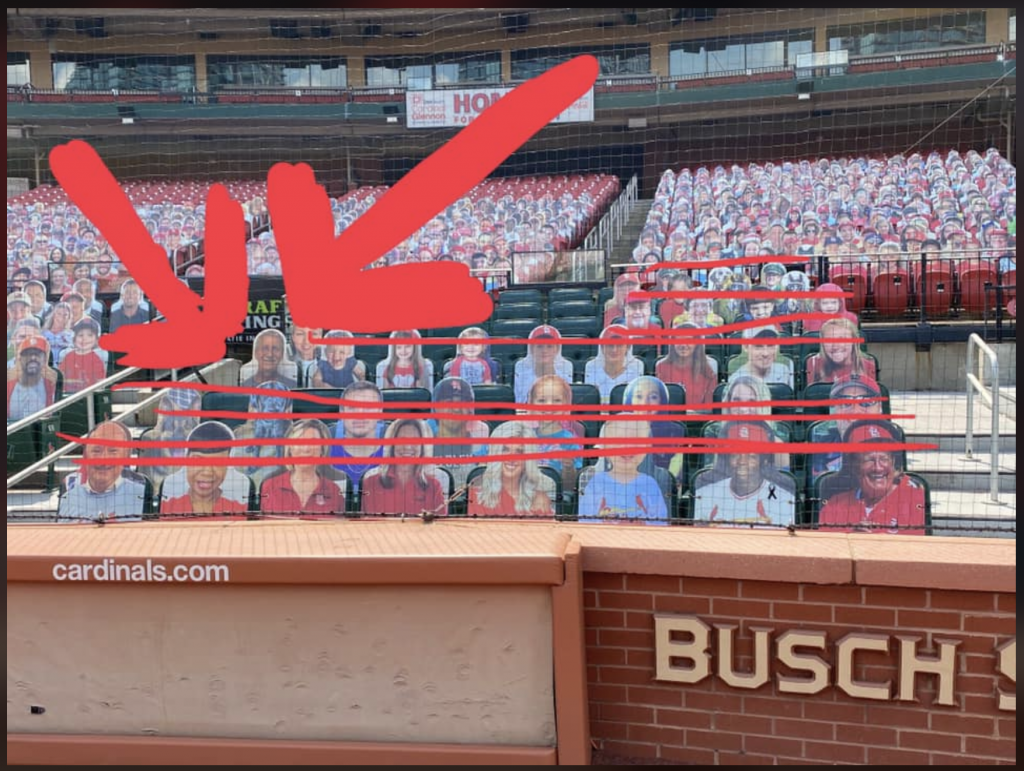 Retail Operations Manager, Ashley Brown ordered one of her dad, Jim Brown, and was excited to see him at the ballpark—in the form of a cardboard fan. She is shown here with her “dad.” The photo to the left she points out where he is sitting. In the photo to the right she stopped by his seat to say hello.

“While there might not be a home game (and even if there was no one would be allowed in) Dad is here reppin’ his Prostate Cancer ‘K-Cancer’ Shirt! We might not be able to go to a game together in 2020 but I made sure he’s here with me in the ballpark.”

Her dad has been at the ballgames ever since, moving to different places. One day he got lucky and was in the green seats. 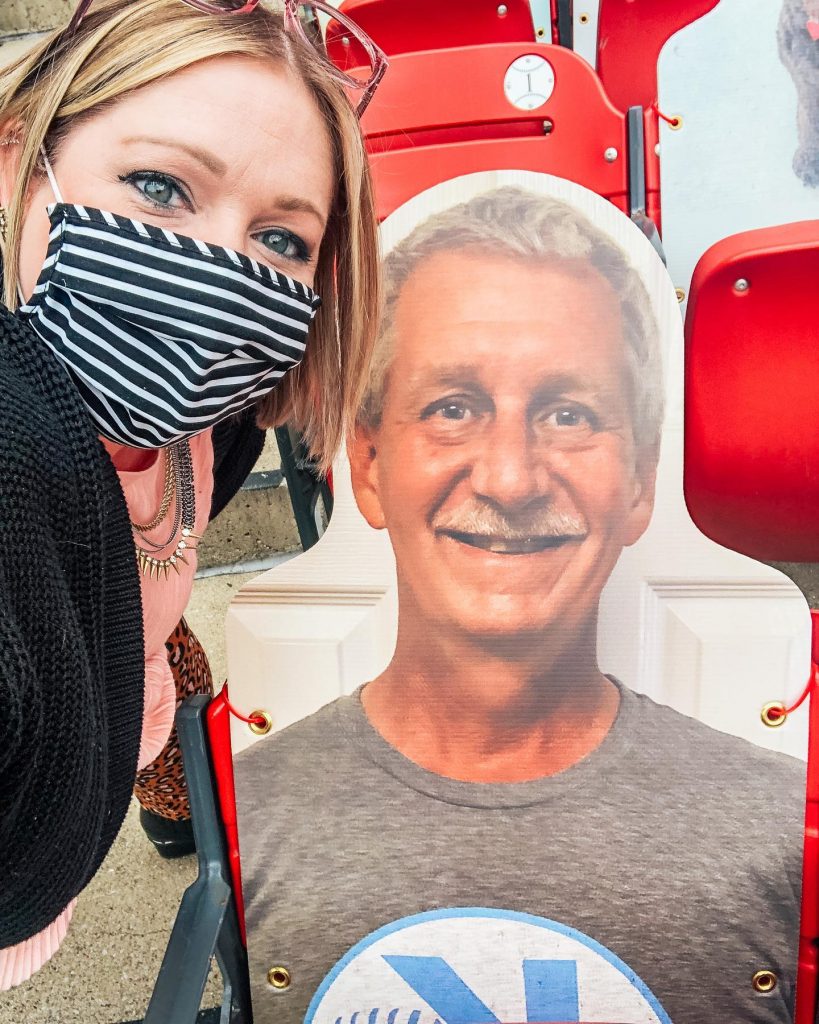 “If you’re watching the game, be on the lookout for my dad! He’s behind home plate today in his ‘K-Cancer’ shirt and hopefully should get some good airtime,” she posted on Facebook.

The cutouts are weather-resistant so they stay in the seats during rain or winds.

Part of the purchase process was the guarantee that at the end of the season the Cardinals will ship the cutouts to the buyers. Everyone who purchased will get their cutout to keep as a souvenir from a strange, unique, and unprecedented 2020 season.

“We have heard from a lot of fans who purchased cutouts for special family members who live far away and can’t attend games, or for deceased loved ones,” said Martin Coco. “It’s sort of their way to attend a game with grandpa again, for example.

“Fans have reached out with lots of heartwarming stories like this. It’s been a great way to connect with fans and engage with them in a season when we otherwise haven’t had our normal opportunities to connect.”

The players and manager have various opinions on the cutouts ranging from “I like them” to “I don’t even notice they are there,” but fans can’t help notice them as they provide levity and conversation with each game. You always wonder who will be sitting in the front row.