January 20 is a day to celebrate: Inauguration Day and National Cheese Lovers Day. A day many of our past presidents would embrace. Case in point, the seventh president of the United States,  Andrew Jackson. 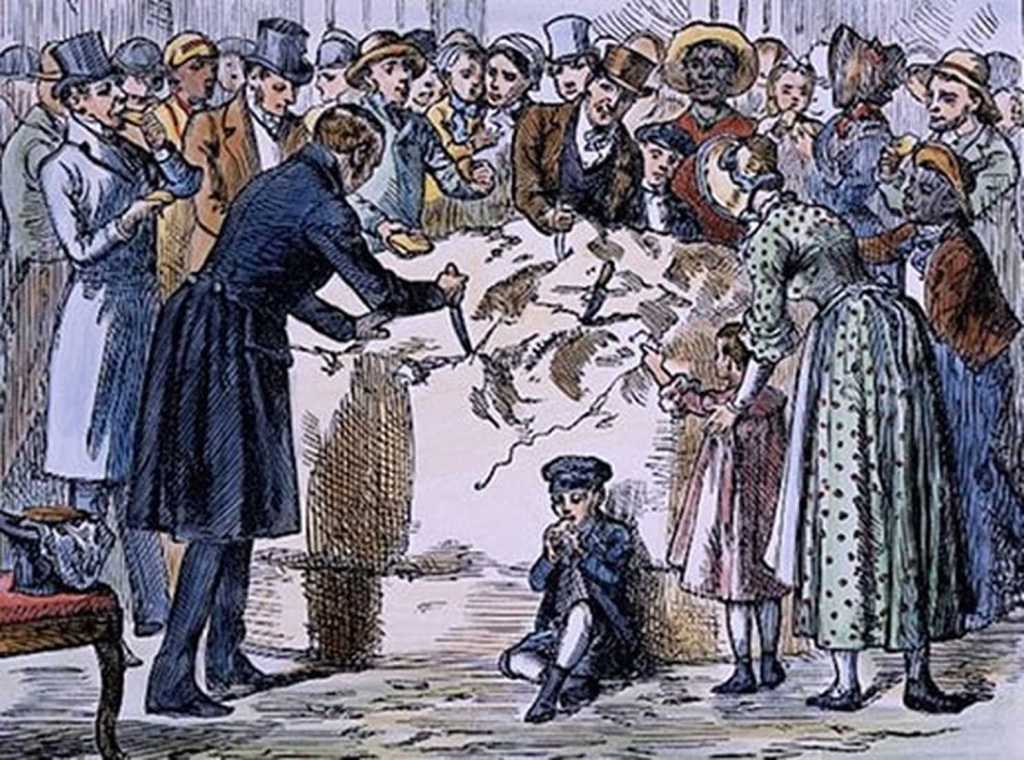 Jackson was the recipient of one of the largest presidential cheese gifts in history.  A 1400 pound wheel of what was reported as a strong smelling cheese measuring four-feet wide by two-feet thick. A New Year’s gift presented in 1836 to Jackson by a prosperous New York dairy farmer and political ally.

The cheese aged for another year at the White House when it was wheeled out the following year for a public open house celebrating Washington’s birthday, which coincided with Jackson’s last few weeks in office. The open house attracted a huge crowd – some better described as a mob – who gobbled cheese and trashed the White House. Reports state the only way the crowd was coaxed back outside was with the promise of free liquor.

The mansion smelled like cheese for months, spurring the next president, Martin Van Buren to ban the serving of food at White House receptions.

Jefferson, America’s first gourmet president, was also presented with a ceremonial cheese in 1801  by the dairy farmers of Cheshire, Massachusetts.  Jefferson’s  cheese was served with cake and wine served at a more dignified reception for Federalists   lawmakers. Surely, one can assume a portion of the that cheese found its way into one of Jefferson’s favorite and more fanciful, unique dishes of the day, macaroni and cheese.  A dish also embraced by Ronald Reagan and LBJ (Lyndon Johnson). 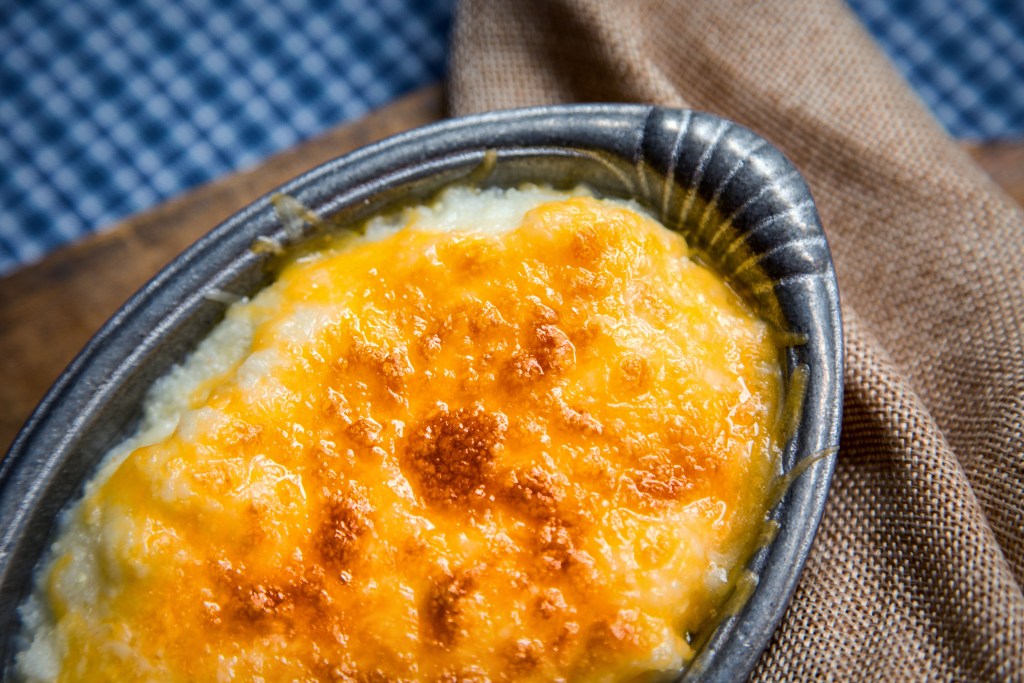 Preheat over to 350F

Grease inside of a 2-quart casserole dish.

In a small frying pan, fry chopped bacon and onions until lightly brown. Set aside. Bring bouillon to a boil in a 2-quart saucepan; add grits gradually, stirring with a wire whisk. Reduce heat and continue cooking, stirring vigorously, until mixture thickens.

Cover and cook for until all liquid is absorbed—about 15 minutes. Remove from heat and add Worcestershire sauce, butter, and 1½ cups of cheese, stirring until well blended. In a small bowl, blend egg yolks with ¼ cup milk. Pour mixture into grits and mix thoroughly; add more milk if necessary, thinning to consistency of cream of wheat.

In a clean, dry bowl, beat egg whites until stiff. Fold into grits. Fold in bacon and onions and pour into prepared baking dish. Sprinkle with the remaining ½ cups of cheese and a dash of cayenne. Bake on middle shelf of preheated oven for 30 minutes, or until fluffy and brown. Makes 4-6 servings. 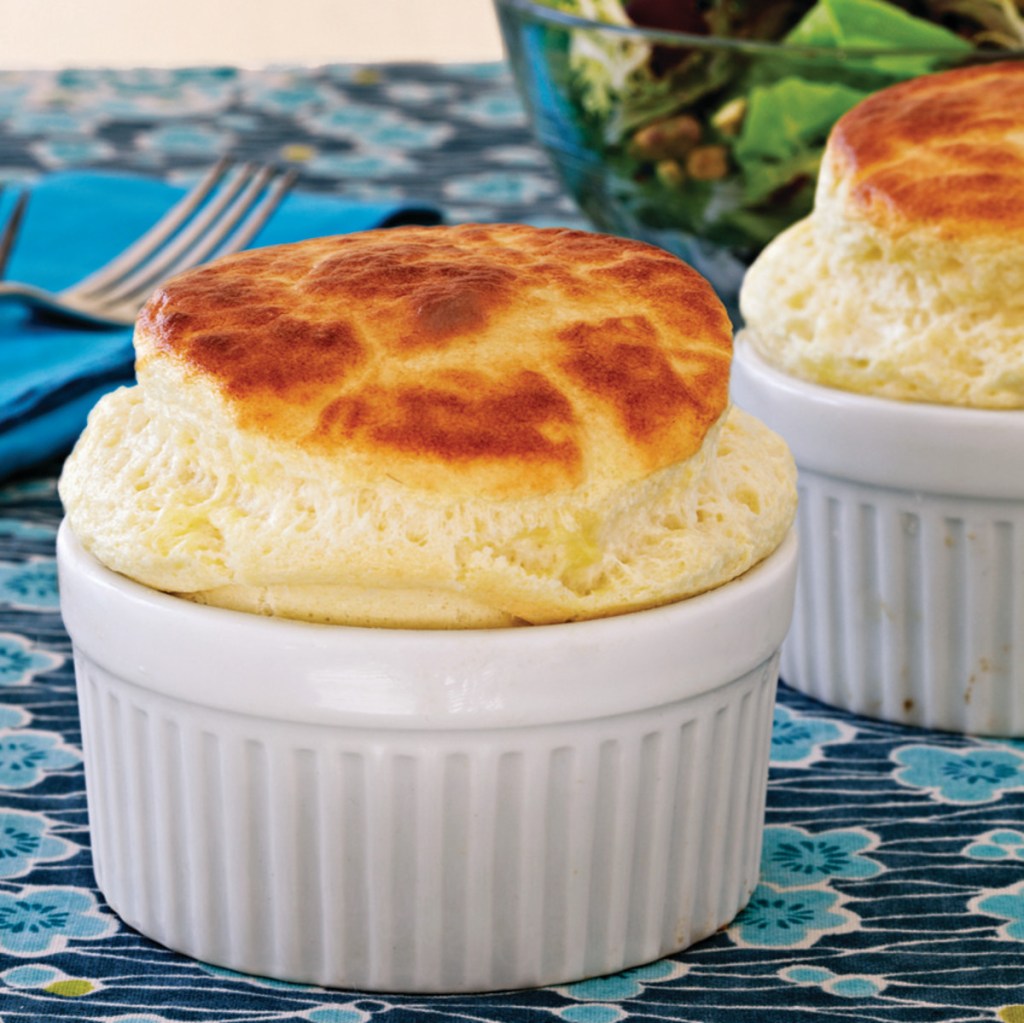 Position rack in lower third of oven and preheat to 400.Butter 6-cup (1 1/2-quart) soufflé dish. Sprinkle with Parmesan cheese and tilt dish, coating bottom and sides. Warm milk in a saucepan over medium-low heat. Meanwhile, melt butter in heavy large saucepan over medium heat. Add flour and whisk for a minute. Whisk in warm milk, whisking until smooth. Return from heat and cook, whisking constantly until very thick, 2 to 3 minutes. Remove from heat; whisk in paprika, salt, and nutmeg.  Whisk a few tablespoons of the hot sauce into the egg yolks, then whisk into the rest of the sauce. Scrape soufflé base into large bowl.

Using electric mixer, beat egg whites in another large bowl until stiff but not dry. Fold 1/4 of whites into the soufflé base. Fold in remaining whites in 2 additions. Fold in Gruyére cheese. Transfer batter to prepared dish. Place dish in oven and immediately reduce oven temperature to 375 degrees.  Bake until soufflé is puffed and golden brown on top and center moves only slightly when dish is shaken gently, about 25 minutes (do not open oven door during first 20 minutes). Serve immediately.  Serves 4

1 teaspoon salt and pepper to taste

Place macaroni into a 2 1/2 quart saucepan, cover with water and bring to a boil. Add salt and continue to cook macaroni until tender, about 15 minutes. Drain in a colander.  Return macaroni to saucepan; season with pepper and toss in butter. Stir in milk/sauce and cheese.  Pour mixture into a lightly buttered  2-quart casserole or au gratin dish.

Place breadcrumbs in a skillet and drizzle with melted butter. Heat over a medium heat, stirring constantly until breadcrumbs are lightly browned. Sprinkle breadcrumbs over top of casserole and bake at 350-degreess for 25-30 minutes.    Makes 4-6 servings.

How About A Patriotic Drink To Go Along With Your Food

We decided to make a special drink for Inauguration / Cheese Lovers’ Day so we headed out to Friar Tuck’s on Watson to get the ingredients, which include a bottle of vodka.

We liked the principles that Mastermind Vodka— which is made locally in Pontoon Beach, Illinois has on their website so we chose a bottle of Mastermind.

They say: ” Our focus is to celebrate the American way of life by honoring the values and principles of the individuals who give so much to America. They include Military personnel, Officers of the Law, Fire Fighters and First Responders… and we are committed to proudly donating a percentage of net profits to organizations that give back to these individuals who dare to risk so much.” 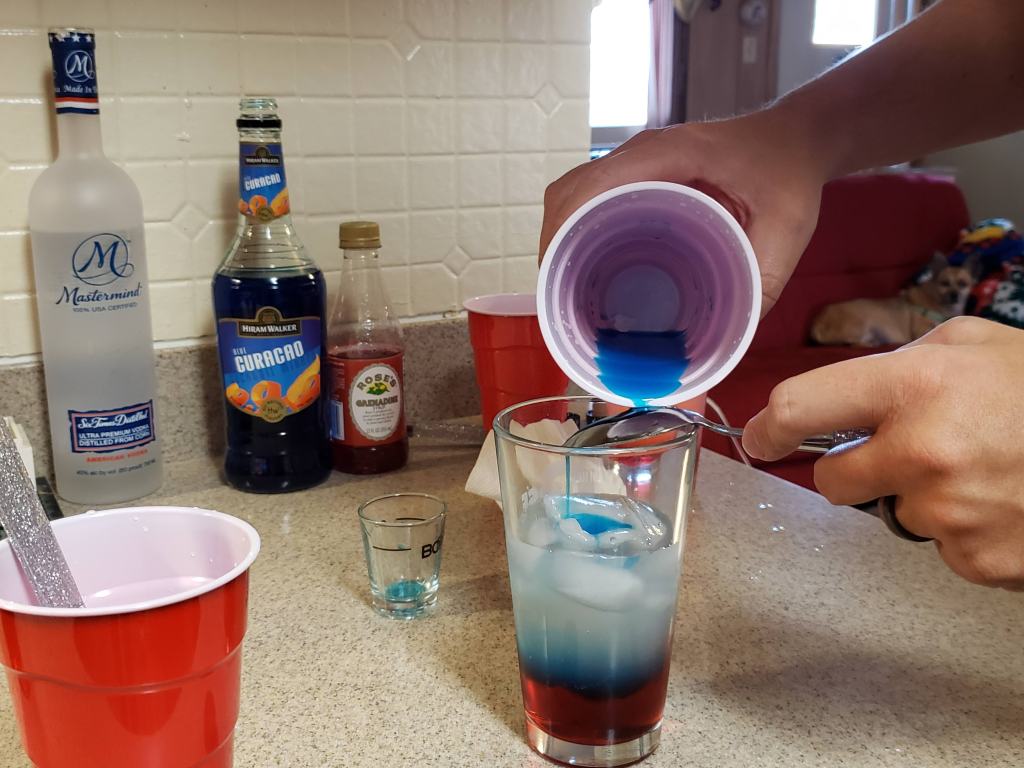 We got some people together and each one made their own drink. Half of the fun was trying to make your drink come out in layers and laughter was had by all. In the end, three looked more purple, but one came out pretty well. Looks like we’re going to have to have more practice.

So whether you are celebrating the new Administration or drowning your sorrows, do it in style. Celebrate National Cheese Lovers’ Day and be sure to include cheese in your menu on Wed. Jan. 20th. 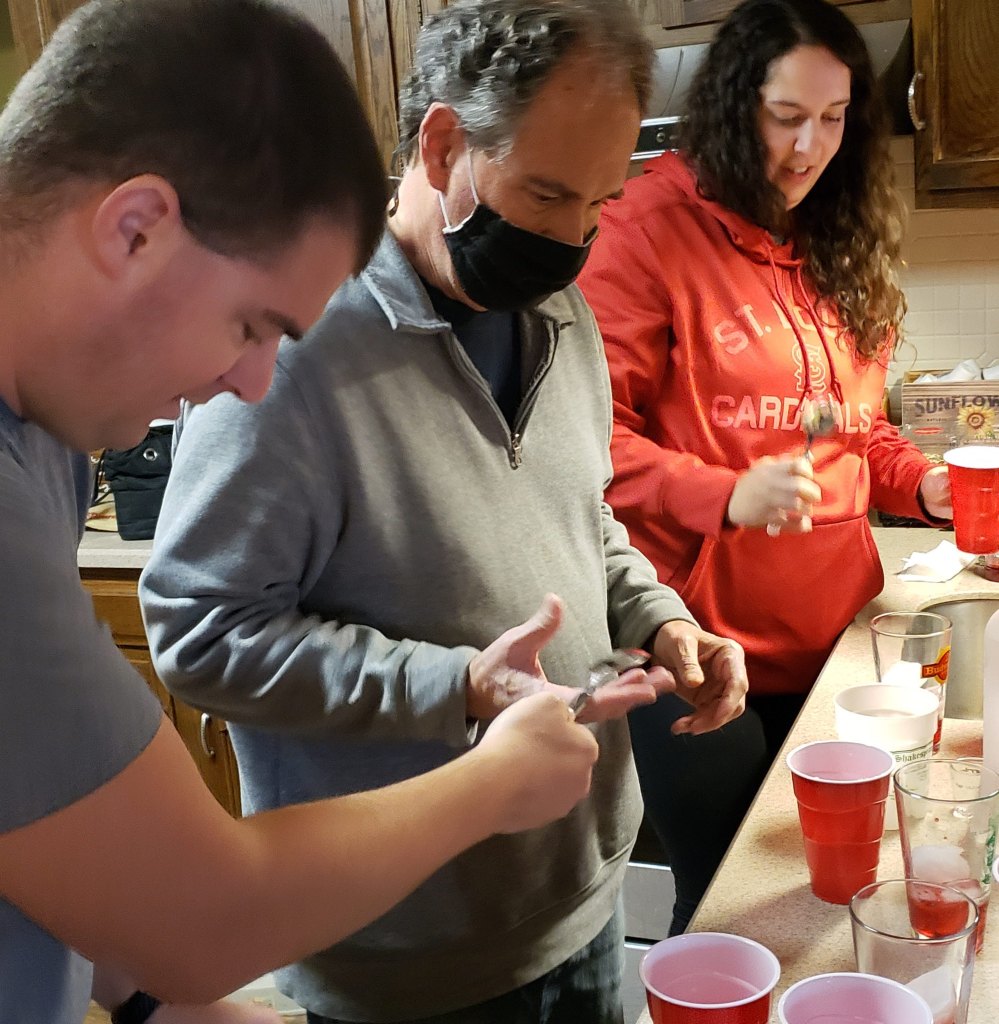 Once you make the grits, we know you will be “bidin'” your time until the next time you can make them because Rosalyn Carter’s Cheese Grits trump all others– especially in our inaugural tasting.