As Damaso Espino watched Leo Bernal sign a contract with the Cardinals earlier this month, he saw the smiles, the hopes and the dreams that fill a 16-year-old’s head as he begins the journey of leaving his home in Panama to become a professional baseball player.

There was a good reason why it seemed Espino knew exactly what Bernal was thinking – once, he was that same 16-year-old catcher, signing a professional contract that he hoped would lead to a long career in the major leagues.

That was 22 years ago, when Espino signed with the Reds. His major-league dreams did not come true, a 14-year minor-league career stalling out in Triple A. Now as a Panama-based scout and international crosschecker for the Cardinals, Espino is getting the chance to help a new generation of youngsters get that same opportunity to see if they can make their dreams come true.

Five years ago, Espino was involved in signing Ivan Herrera, who was recently ranked by MLB.com as one of the top 10 catching prospects in the game. This month it was Bernal, one of the two headline prospects in the Cardinals current international class. Bernal, who turns 17 in February, will be off to the team’s academy in the Dominican Republic as soon as MLB gives the medical clearance that the academy can be opened safely.

“This experience helps me relate to what these kids are going through now,” Espino said in an email. “At that age, emotions run high and the pressure of performing could interfere with a proper developmental process. I also understand that everyone progresses differently and at their own pace, based on physical and psychological factors.

“This game is tough, there are difficulties and the signing process is a unique time. You only sign from amateur to professional once in your life.”

For players in this year’s class, one of the difficulties was having to wait an extra six months to sign. In a normal year, the international signing period begins on July 2, but it was delayed until Jan. 15 because of the pandemic.

“It was tough for him (Bernal) as he was looking forward to start training in the academy and start the ball rolling with his career,” Espino said. “He handled it the right way; we helped him create a weekly routine to continue his work and stay active throughout that period.

“The road ahead is long and with many obstacles. However, we do have high expectations for Bernal, and we believe he has the attributes and potential to become a top prospect and eventually put himself in a position to be an impactful player at the highest level.”

Espino knows about the long road and how obstacles can sometimes block the way to your goal – from his personal journey.

Espino’s path began in rookie ball with the Reds and included stops in five organizations, but never with the Cardinals, and in independent ball, before he retired after the 2014 season. He spent parts of six seasons in Triple A but never got the call that would have sent him to the major leagues. After retiring, Espino and his wife moved back home to Panama.

“I got a call from a friend that scouts with the Oakland A’s and he mentioned that St. Louis was looking to hire a scout in Panama,” Espino said. “He played in the minor leagues with the Cardinals and had a good relationship with Moises Rodriguez (then the Cardinals’ director of international operations and scouting and now an assistant general manager.)

“He recommended that we meet, and not long after I began working with the Cardinals.”

Now 37, Espino works not only in Panama but throughout Latin America. He also was involved in signing Adari Grant this month, a shortstop from the Bahamas, considered the other top prize in this year’s Cardinals class.

Scouting Grant was not as easy as scouting Bernal, a well-known player growing up in Panama, which has increasingly become a hotbed for youth baseball.

“In the Bahamas, there are no national tournaments or even many baserball stadiums to see competitive level games,” Espino said. “We had to coordinate with the agent to put some players together to imitate real competition. We also have to figure out if they are traveling to tournaments to see them against other players, which can be challenging with a country like the Bahamas that does not always have a national team in international events.”

It was the opportunity to see Bernal in some of those events which peaked the Cardinals’ interest and led to more than two years of scouting and pursuing the player before he was old enough to sign a contract.

Bernal played in the Under 15 World Cup tournament in 2018 in Panama, the same tournament where the Cardinals found another catcher, Jake Burns, from Australia, who signed in the fall of 2019. Bernal was a year younger than other players on his team, becoming the starting catcher as a 14-year-old.

“He has been a captain on his teams multiple times and has been part of a winning environment,” Espino said. “We value these aspects of the game and we are looking for kids to not only become good players but also to eventually help us win games at the highest level.” 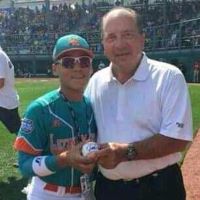 Bernal also was on the Panama team that played in the Little League World Series, where he had a chance to throw out a ceremonial first pitch to Hall of Fame catcher Johnny Bench.

It was from those tournaments, as well as watching him play in his native country, that convinced the Cardinals to sign Bernal.

“The thing that is different about him is that Panama has a great culture of youth baseball which is very impressive,” said Luis Morales, now the director of international operations and scouting for the Cardinals. “I had a chance to be there one year. (Edmundo) Sosa was playing in a professional league and when I went to the game there was like 500 people in the stands. At a youth level game there was like 5,000.

“On the radio they are talking about 13 and 14-year-old kids. It’s pretty crazy, and impressive. When you scout players from countries like the Dominican Republic and Venezuela it’s more like tryouts. In Panama, the kids there are playing just for fun.”

Having grown up in Panama playing baseball, Espino knows what the culture is like.

“Every province (state) has a team that plays over two months around the country,” he said. “Games are televised and draw large crowds. The environment created with these events helps to identify which players rise to the occasion and can perform under pressure. Bernal was always an important factor in the middle of his games, which is something we want in our players.

“We love to see these kids compete for their country and evaluate their behavior in pressure situations. At the same time, we were evaluating everyone and trying to create a preference list of what we consider the best players for our system.”

“He was passionate about watching the games, and you don’t see that a lot in international kids,” Morales said.

Passionate also was the word Morales used to describe Espino’s transition from player to scout and what he has already brought to the organization and will continue to provide in the future.

“Damaso is very passionate about the scouting process, from evaluating, comparing and finally getting to the negotiating and acquiring talent part,” Morales said. “Having played for so many years and as a catcher has helped him sharpen his evaluation skills and learn very fast.

“In addition, his ability to communicate in both Spanish and English has helped him create excellent relationships with our international and amateur scouts and with the front office. He has been a great asset to our department.”

Espino’s reward is watching players such as Herrera take the opportunity and make the most of it, now nearing his chance to break onto the major league level.

“I am extremely excited and proud of what Ivan has done so far in his career,” Espino said. “I understand there is still a step to take from being a prospect to developing into an impactful major league player. However, I have seen Ivan work so hard to maximize his abilities and put himself in this position. He is a good kid with clear goals and the willingness to sacrifice and do what it takes to be the best he can be.”

Espino thought about Herrera when he watched Bernal, and will no doubt continue to do so as he begins tracking Bernal’s career.

“They have some unique similarities as they are both fierce competitors with high baseball IQs and a history of performance at amateur levels,” Espino said. “They have shown similarities in their work ethics and aptitudes.

“Their tool sets are somewhat different, especially at the same age. Ivan was more polished and mature at the plate and his actions were steadier. Bernal shows advanced defensive attributes, he is a switch hitter with projections from both sides and for the age, his actions are more explosive and aggressive.”

Espino, and the Cardinals, expect the pipeline of players from Panama to the organization to keep producing in the years to come.

“The country is steadily signing more players and for higher signing bonuses,” he said. “I believe we will see this trend continue in the country.”