JUPITER, Fla. – There were two reasons Lars Nootbaar found out last summer how much he missed baseball.

The first was the cancelation of the minor-league season because of the pandemic, which took Nootbaar – an outfielder in the Cardinals system – away from the game for the first time since before he started playing Little League.

The second was when his parents told him he needed to go out and get a job instead of just lying around the house. He ended up spending four months working as a handyman mechanic for an aerospace company, making $20 an hour, a job which required him to get up at 4 a.m. six days a week.

“It just completely flipped my perspective,” said Nootbaar, who is back to playing baseball this spring as one of five non-roster outfielders invited to the Cardinals major-league camp.

The biggest takeaway from that dual experience, of working and also not playing baseball, is that Nootbaar realized what an opportunity he had and how seriously he needed to pursue his career.

“It definitely kind of lit a fire under my butt a little bit,” he said. “It made me a little more hungry for it because you know what the alternative is. Being able to see that during my playing career I think is a great perspective to have.

“Just being able to get back out on the field, see some familiar faces and meet some of the major-league guys, has been awesome.”

Nootbaar, like all of the Cardinals minor leaguers, arrived in Florida from his home in southern California last March to begin spring training. On his second day in town, the players were all sent back home.

There were reports the season would be canceled, but nothing was officiai. Nootbaar decided to go back to school at USC, working towards his degree in sociology, but not until the fall semester began.

“My parents were like, ‘Hey buddy, start getting ready, you are going to need a job,’” Nootbaar said. “That kind of forced my hand a little bit.”

Nootbaar had a friend who worked at Northrop Grumman in his hometown of El Segundo and found out they had an opening. He took the job, not really knowing what he was going to be doing. He at first thought he was going to be working the night shift but found out later his friend was the manager of the morning shift, and he was assigned to that group.

“My first day I was there I didn’t know what to wear so I wore dress clothes and everybody was thinking I was an engineer,” he said. “Guys I was going to start working with were laughing at me and said, ‘buddy you’re not wearing any of that.’”

Nootbaar found out the proper work attire was a T-shirt with either shorts or sweatpants.

“I was basically muscle,” he said. “I was a handyman mechanic. The engineers would draw up these graphs and blueprints of what we had to build. I was in composite tooling. We would build 12-foot platforms, or whatever they needed. I was sanding, carrying, sawing, screwing – just basic muscle work.”

Nootbaar’s only previous mechanic experience had been trying to fix skateboards. Now he was working on parts that were needed to help build fighter jets.

“The fact I was walking in that building was crazy,” Nootbaar said “I just tried not to mess up.”

Nootbaar had to be at work by 4:45 a.m. and worked until about 2:45, after which he would fit in his workouts. When he added going back to school full time when the fall semester began at USC, his life got even busier.

“Basically I was trying to fit the classes in during my lunch break or whatever time I could,” he said. “It was hectic. After about a month and a half of doing all three I stopped and just said, ‘I’m a baseball player.’”

Playing baseball is Nootbaar’s only job this spring, and he couldn’t be happier – even if the social distancing protocols have him and the other non-roster players, such as his roommate Scott Hurst, having their lockers in the minor-league clubhouse instead of the normal placement in the major-league clubhouse.

Nootbaar still has had a chance in the early days of camp to mingle with some of the veterans and ask questions, and mainly try to watch and learn.

“I’ve been fortunate to have a couple of conversations with Paul Goldschmidt trying to pick his brain a little bit,” Nootbaar said. “He was very open to talking about hitting and different things. It’s kind of what I am hoping to get out of the experience.

“The learning part is going to be huge. Seeing guys and how they work and how they go about their business, the routines they follow and how professional they are. I want to observe and learn and take in everything I can from all of the older guys.”

Nootbaar was the Cardinals’ eighth-round pick in the 2018 draft after his junior season at USC. His classwork since has left him just one semester short of his degree in sociology.

While Nootbaar knows there may come a day when he has to put his college degree to use – or his mechanic skills – he doesn’t want that to be for a while, not when he has a chance to play baseball.

Nootbaar hasn’t been on a field for a game since Aug. 28, 2019 when he was playing for Double A Springfield. After starting the year in Peoria he advanced to Palm Beach and moved up again to Springfield for the final 33 games of the season. He likely would have begun a 2020 season in Springfield with a chance to reach Memphis before the year ended. 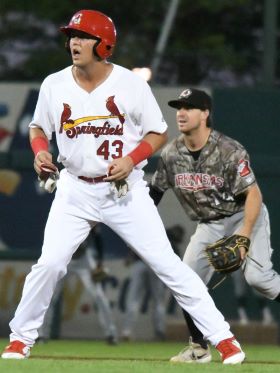 Instead, he missed his entire age 22 season, an important year for development, but he takes solace in the fact that almost every minor leaguer had to go through the same year away from the game.

“It definitely was tough,” he said. “Every day you get a day older, but it something that was out of my control. It was unfortunate but it wasn’t the worst thing in the world.”

The perspective he gained might have made the lost season something he will benefit from in the long run.

“I definitely want to be out on the field playing,” he said. “When I came out of that job I was like, ‘I will never complain about anything in baseball again.’ It’s all a hell of a lot better than waking up at 4 in the morning. I know I’m very fortunate.

“I kind of learned I don’t feel as out of place if I was to walk into a garage or a tool shop. In terms of being a man’s man I gained a step. I’m not going to say I’m an expert by any means but I have an idea of how to work a wrench.”

For the moment, however, he just wants to show that he knows what to do with a baseball bat in his hands.

“There’s so much room for me to grow,” he said. “What I have noticed so far is that everybody is working with intent. That’s kind of opened my eyes a little bit.”