Negro Leagues player Oscar Charleston, who was inducted into the Baseball Hall of Fame in 1976 will be getting a star on the Missouri Walk of Fame this week at the Missouri Cherry Blossom Festival in Marshfield, Missouri this Friday. Each year the festival honors six famous Missourians or prominent people who have had ties to Missouri with a star on the sidewalk. The ceremony will take place Friday April 23 at 1 p.m.. The Walk of Fame is located  at the intersection of Clay and Jackson in Marshfield, MO. 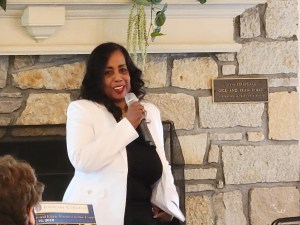 Lynne Jackson of St. Louis, shown left at a recent DAR event where she won an award– recently found out she is a descendant of Oscar Charleston.

“He is my great, great uncle on my Mom’s side, Jackson said. “After his playing days he was a scout for Branch Rickey, at the same time he was looking to integrate the major leagues so maybe he had something to do with signing Jackie Robinson.”

In the 1940s, Charleston scouted for Rickey, during the time he had scouts making recommendations on players to consider for the purpose of integrating the major leagues. Rickey’s most memorable act with the Dodgers involved signing Jackie Robinson, in 1945 thus breaking baseball’s color barrier,

After scouting Charleston went into managing and led the Indianapolis Clowns to a league championship in 1954.

Buck O’Neil once said of Charleston, “Charlie was a tremendous left-handed hitter who could also bunt, steal a hundred bases a year, and cover center field as well as anyone before him or since…he was like Ty Cobb, Babe Ruth and Tris Speaker rolled into one.”

According to the Baseball Hall of Fame, “His finest season was likely 1925 when he hit .451 for the Harrisburg Giants to go with 20 homers and 35 RBI. He won batting titles in the Eastern Colored League in 1924 and 1925.” 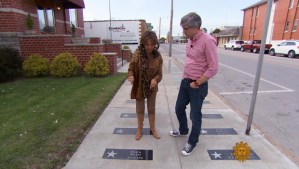 If the name Lynne Jackson sounds familiar, it is because she is the founder of the Dred Scott Heritage Foundation and has been instrumental in bringing attention to Dred and Harriet Scott—who were her great, great grandparents on her father’s side. She spearheaded funding for the statue that now stands in front of the St. Louis Old Courthouse—famous as where the “Dred Scott Decision” was handed down. Now she is raising money to create a memorial at his gravesite.

To find out more about Jackson and the foundation CLICK HERE.

Being the descendant of a famous person like Dred Scott is unique, but to recently find out she had another famous relative – Oscar Charleston from the Negro Leagues—is one of a kind. On Saturday she was awarded the prestigious History Award from the National DAR.

She will be appearing at the Cherry Blossom Festival in both capacities. Friday she accepts the star on behalf of Charleston and Sunday at 1:30 p.m.  she resumes her primary role as the great, great granddaughter of Dred Scott as she  plays the piano in a concert which will be attended by Missouri First Lady Teresa Parson called, “First Ladies Piano Concert.” At the concert, 10 pianists and one organist will play simultaneously –patriotic and gospel music.

The concert is a free Missouri Bicentennial event at Marshfield United Methodist Church, and will feature other former First Ladies in attendance.

To find out more about the Cherry Blossom Festival where Charleston will be remembered, CLICK HERE.