The Latest from STLSportsPage.com
From Press Release
Sports memorabilia has gone digital. Sports NFTs, which can include digital trading cards, signed sports memorabilia, or video clips, continue to grow in popularity. These unique digital assets fluctuate in value, much like a traditional sports card or other collector’s item.
Beginning Thursday, Nov. 4, 2021, Big League Impact will offer anyone who donates $100 or more directly on bigleagueimpact.com an official NFT commemorating Wainwright’s 2,000th career strikeout. The physical piece which inspired the NFT’s was created by Steven Walden, a renowned St. Louis sports artist. It has been signed and commemorated by Wainwright as his official 2,000th strikeout piece.
Higher donation levels will unlock rarer NFTs and physical artwork, while the first donor to give $20,000 will receive the original artwork as well as a one-of-one NFT. To be eligible, donations must be made at www.bigleagueimpact.org/waldennft by 11:59 a.m. Monday, Nov. 8.
Once the 96-hour early access window closes, all remaining NFTs will be available for purchase on the AVrts site NFTHub.Kred beginning Monday, Nov. 8. 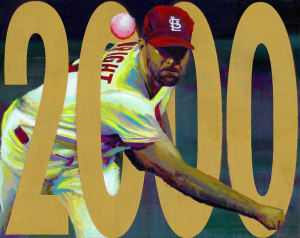 Big League Impact was started by Wainwright and his brother in 2013 to combine their love of fantasy football with a passion for giving back. Since then, the organization has grown considerably, but its mission remains the same: to fight poverty through the platform of sports.
“The work that we do with Big League Impact has affected and impacted millions of people in the U.S. and around the globe,” Wainwright says. “We are always looking for ways to effectively and efficiently raise funds in support of causes that players care about. These NFTs were a no-brainer for us as this series will be dedicated to on and off-field impact, and has already made an impact in Haiti and New Orleans.”
Thursday’s drop represents the Genesis Drop for Walden, who has raised nearly $500,000 for various charities over the past five years.
“Helping others with my art has been a mission of mine since I decided to follow the path of art as a career, and being able to raise money for Adam and Big League Impact is especially close to my heart, as they’ve been there from Day 1,” Walden says. “I can’t think of a more fitting way for my Genesis Drop in the world of NFTs than to do it for the person and organization who have played such a large role in launching my career.”
In September, AVrts artist Frenchy painted a live image of Wainwright as the Cardinals won their 17th game in a row. That piece was raffled off and raised $17,000 to assist people affected by Hurricane Ida and the earthquake in Haiti. The NFT version of that piece will be dropped as the next piece of the collection.
——
About Steven Walden www.stevenwalden.com
Instagram & Twitter: @stevenwalden
Facebook: facebook.com/stevenwaldenart
Steven Walden is a St. Louis-based artist who specializes in sports and pop culture. Steven has created commissioned work for various private collectors, pro sports franchises, and celebrities. Steven has worked alongside and who own or have featured his art include President Bill Clinton, Jon Hamm, Yadier Molina, Cal Ripken, Jr., Kurt Warner, Brett Hull, Ryne Sandberg, Reggie Jackson, and many others. In order to bridge his desire to help others and to create art, nearly half a million dollars in bids at various charity auctions and events.  Steven and his work have been featured on local and national media news outlets, including NBC, ABC, CBS, and Fox network affiliates, MLB.com, and sportsillustrated.com.
About Big League Impact www.bigleagueimpact.org
Big League Impact, Inc. is a nonprofit organization that partners with professional athletes through unique, sports-related fundraising platforms to help people meet basic human needs like food, clean water, medical care, shelter, and education in an effort to save lives, restore dignity, and instill hope. Started by St. Louis Cardinals pitcher Adam Wainwright in 2013 as a fantasy football fundraiser, Big League Impact has grown from coast-to-coast, working with 80 MLB players, and raising more than $5.8 million for causes around the world.
About NFT.Kred
NFT.Kred connects social interaction and social impact with the blockchain, providing personalised, shareable, transferable tokens of appreciation.Every NFT.Kred NFT tracks activity throughout its lifetime, threading together a disparate community with a common goal of enhancing social interaction,impact, and connectedness.NFT.Kred transactions are processed on the Matic network by default, using the ERC721 and ERC1155 standards, and support Ethereum and any Etheruem-compatible blockchain including private blockchains.
About AVrts
Started by tech veterans Raymond St. Martin, Kwasi Asare, Kai Schneider, and Ben Wen, as a way to give back to their communities by leveraging their knowledge in marketing and digital assets to empower physical artists and athletes to make an impact for causes they care about.