If the lockout has you looking for a different way to get a baseball fix instead of watching pitchers and catchers playing catch in Florida, perhaps a new book can fill that void.

A new novel from Steve Hermanos should hold your attention for a while.

“Going, Going Gone” is a work of historical fiction that involves more than just baseball, although there is plenty of that included as well.

There aren’t many baseball novels that can include storylines that involve time travel, Theodore Roosevelt, Albert Einstein, Mark Twain and an alternative U.S. history, but Hermanos manages to pull it off well.

The basic premise of the book is that because of a chain reaction of events, two players and the manager of the modern-day Giants are transported back in time because of an earthquake, suddenly finding themselves in 1906 on the day of the great San Francisco earthquake and fire.

The three soon find themselves involved with the New York Giants, with much of the plot revolving around real-life baseball stars of the day such as Christy Mathewson, Honus Wagner, Ty Cobb and more. 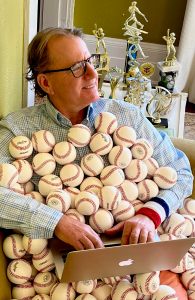 Hermanos, shown left, does take a few liberties with historical references, all for the point of the story, but the stars of the book, all fictional characters, become people that the reader is rooting for as they try to find a way to travel back in time to their former lives.

“I chose 1906 because it’s the time in baseball history when the game was a reverse image of what it is today,” Hermanos said. “The game was played with incredible intensity. The stakes were huge for many of the players. If they failed, many would have to go back to previous lives in coal mines, or wheat fields. Many died from alcoholism a few years after their playing days were done. The players then had big personalities and were not afraid to show it on the field, unlike today.

“The game was markedly more colorful, faster-paced, intense, exciting and intimate. Once adjusted to it, “Going, Going Gone’s” players from today find the baseball environment of 1906 reinvigorating and one in which they rediscover the game’s joy, and deeper truths about themselves.”

“Going, Going Gone” will be published by Inkshares, Inc., with a Feb. 22 release date. It is scheduled to be in bookstores starting March 1.

For information or to order the book: CLICK HERE.