This is not the first time that Brendan Donovan and Juan Yepez have had their baseball dreams put on hold.

The two Cardinals’ prospects endured the canceled minor-league season in 2020 because of COVID-19, and now find themselves having to work out at home while waiting for the lockout to end.

Both Donovan and Yepez are slated to be in their first major-league spring training camp this year but the lockout has delayed their arrival in Florida. As is the case with all of the players on a 40-man roster, they will not be allowed in the Cardinals’ Jupiter complex until a deal is reached between the owners and the players union.

“Talking to my friends lately, it just seems like it’s always something,” Yepez said. “We just are waiting for the deal to get done.”

Yepez, who will turn 24 later this month, was added to the 40-man roster when he was activated for the wild-card game last October. Donovan, 25, was added to the roster after a standout season in the minors in 2021 which included a solid stint in the Arizona Fall League.

Each should have a legitimate chance to earn a spot on the Cardinals’ big-league roster, but each knows that depending on when the lockout ends, spring training could be cut short – which would likely limit their opportunities.

The best path to a spot on the roster for Yepez likely will be if a universal designated hitter becomes part of the negotiated labor settlement.

“I know if they implement the DH on the National League side that would be a huge opportunity for me,” Yepez said. “The positions I play (first base and third base) we have superstars.

“I just look forward to getting there and competing and showing them what I can do. I’m just looking forward to playing baseball. Just being around the team, it’s like a dream since I was a kid, trying to be in the big leagues. I had a little experience in the wild-card game, but now it’s more of a reality that I’m there to try to win a spot on the team.”

Yepez hit a combined 27 homers in 2021 between Springfield and Memphis, then followed up that success by tying for second in the Fall league with seven homers.

One casualty of the lockout for Yepez is that he almost certainly has lost the chance to report to camp early, as he planned, to get in special defensive work with coach Jose Oquendo. 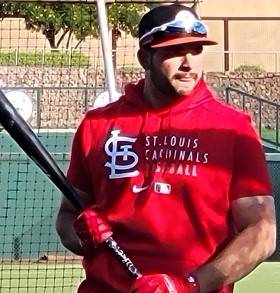 “They wanted me to be part of an early group of guys,” Yepez said. “When you are a minor leaguer you don’t have a chance to say, ‘Can I go early?’ I really wanted to be there early. When you get there the feeling is just different.”

Instead of being in Jupiter, Yepez spent this week at his home in Murfreesboro, Tenn., working out at Middle Tennessee State, just as he has for the last month since he returned from a month-long visit with his family in Venezuela.

“I wake up early to hit, do my baseball stuff, then a lifting program,” Yepez said of his daily routine. “Late in the afternoon I do a burn boot camp; more like another way to do cardio and agility, stuff like that.”

In between, Yepez does homework for the two online classes he is taking as he works toward obtaining his college degree in business.

“It’s a little weird, but I am just preparing like it’s on time so whenever they say play ball, let’s go,” Yepez said.

One hundred twenty miles south of Murfreesboro, Donovan has spent the last month working out near his home in Madison, Ala.

Like Yepez, he is following a strict training regiment so he can be as prepared as possible to compete for a roster spot when the spring camp opens.

Donovan’s path is two-fold; the fact that he is a lefthanded hitter, something the Cardinals need on their bench, helps his chances, as does the versatility that he showed in 2021 when he started games at all four infield positions, plus left field and right field, during his time at Springfield and Memphis.

“I’ve told them I can slide over to center too if they need me to,” Donovan said. “I’m looking to fill in any role, any spot where I’m needed.

“I was very happy with how things went last year and I learned a lot, so I just want to try to do the same thing – don’t try to do too much or be the player I’m not. If I can move all around, square balls up, play good defense, run the bases, score runs – just find a way to be productive in some way – ‘how can I help the team win today.’ If I can carry that mentality and mindset over, I think I’ve got a good shot.”

Donovan hit a combined .304 with 12 homers over three minor-league levels last season, then finished the year by posting a .308 average in the Fall league. 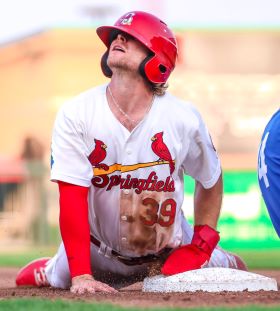 Like Yepez, Donovan said he probably would already be in Florida if there wasn’t a lockout even though the official reporting date would not be until the middle of the month. Either way, he is planning on heading there in mid-February, just so he is there and ready when the word comes that a labor deal has been reached.

Donovan had a brief exposure to the big-league spring atmosphere in his first minor-league camp three years ago but knows this year will offer a different experience.

“I was able to go up for a couple of games but I didn’t get in a game,” he said. “Just being in the dugout around the guys, listening to them, watching how sharp the game was – that was cool.”

Donovan wants to soak up more knowledge from the older players this year – as well as get a chance to show he can compete at the major-league level.

“I’m ready,” he said. “I want to see guys in action, see their routines and see what I can learn from the veterans.”

One player Donovan already has targeted with questions is Lars Nootbaar, who became a close friend when the two roomed together in 2019 when they played in Peoria.

“He probably gets a little annoyed with all my questions, but he’s such a good dude,” Donovan said. “He was huge when I went up to be on the taxi squad for the wild-card game.”

Even before Yepez and Donovan can officially join the Cardinals for spring training, a reality of being on the 40-man roster arrived in their bank accounts this week. Each received the first $5,000 stipend paid out to players from the union because of the lockout, money that comes from the union building up a war chest by withholding licensing money from the last few years.

Each was grateful for the money, which was more than a typical monthly paycheck in the minors. Another payment could be coming the first of March, if the players are still locked out of camp.

“Getting a check like that was awesome, especially after makinr the minor-league minimum the last couple of years,” Donovan said. “But I hope we don’t have to get another one.”