JUPITER, Fla. – After moving into his new townhome in January, not far from Roger Dean Chevrolet Stadium, one of the first phone calls Nolan Gorman made was to another resident of the area.

Gorman didn’t need advice on local restaurants or directions to the grocery store. The best prospect in the Cardinals’ system had spent enough time in the area during spring trainings, instructional leagues and when he played for Palm Beach in the minor leagues to be well acquainted with how to get around and where to go.

What Gorman was reaching out to Paul Goldschmidt about was strictly baseball. Could they get together to work out?

Since, the two have gotten together several times a week to hit, lift weights and talk about the game, Gorman said, continuing a bond that has only strengthened over the years and which, at some point this season after the lockout finally ends, should see the two become teammates on the Cardinals.

The two first met when Gorman was a senior in high school in the Phoenix area and Goldschmidt was playing for the Diamondbacks. They were represented by the same agency and spent time together that spring at the Diamondbacks camp.

Six months after Gorman became the Cardinals’ first-round pick in the 2018 draft, Goldschmidt was traded to the Cardinals, allowing them the chance to renew, and build their relationship.

“I didn’t go to a lot of Diamondbacks games growing up because I was always playing,” Gorman said. “But it was always fun watching him because he was so good.”

Gorman has had more fun being able to direct questions at Goldschmidt, and other veterans, as he seeks tips and advice as he progresses toward his soon to come promotion to the major leagues. 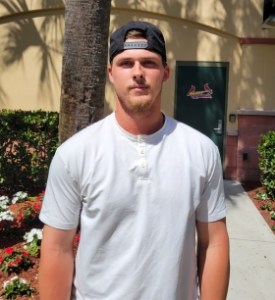 The two communicated by phone or text last summer, when Gorman was in Memphis.

“I just talked to him about what he was doing, what kind of mindset flip that he had. Basically he just said it was fully trusting what you’re capable of and your routine and just going out and playing the game.

“It’s basic info but it’s always good to be reminded of that stuff.”

Gorman took that advice and finished up strong in Memphis, hitting 25 homers with a .279 average between the Double A and Triple A levels, all while making a successful transition from third base to second base.

It’s Gorman’s age that is one of the reasons Goldschmidt has been so willing to offer advice and suggestions. Three springs ago, he was doing the same thing inside the clubhouse with a 20-year-old prospect, Dylan Carlson.

At the time, Goldschmidt said he enjoyed helping out young players because he remembered when he was that player, unsure of himself, and sought out veterans on the Diamondbacks for whatever help that could provide.

“I had a ton of guys,” Goldschmidt said then about the veterans he leaned on for advice. “I was really spoiled to have a great veteran group. My locker was between Willie Bloomquist and J.J. Putz and they helped me a ton. I asked a ton of questions and just watched everything they did.

“I was just a sponge soaking up all their knowledge. I was eternally grateful for what they shared with me.”

Gorman, just as was the case with Carlson, is appreciative of Goldschmidt’s willingness to answer so many questions.

“Everybody with the Cardinals in the big leagues is willing to help no matter who they are,” Gorman said. “Yadi’s willing to help. You can go up to anybody in the clubhouse if you’ve got a question and they are going to sit down and talk to you. 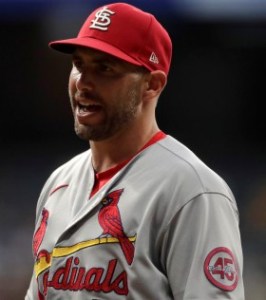 “Goldy is a great person off the field too. You just see how he goes about the game.”

Sometimes a veteran player like Goldschmidt can offer advice that he doesn’t even know he is providing, just letting younger players watch and observe, even from a distance.

As Gorman has climbed through the minor leagues, he has noticed that there are skills necessary to succeed in the majors beyond a player’s ability to hit, catch or throw a baseball.

“As the years go by you feel like you are getting closer (to the majors) but at the same time you have to keep the mindset that you are there,” Gorman said. “You have to hold yourself to a major-league standard and go about your day as a big leaguer. That’s kind of what they preach as Cardinals. Even if you are in the lower levels of the minor leagues you have to hold yourself to that level. Otherwise it’s going to take you a long time to figure that out. If you figure it out at the low levels, it kind of makes it easier.”

If not for the lockout, Gorman would be sharing the major-leagu clubhouse with Goldschmidt, Molina and the rest of the Cardinals. Instead, since he is not on the 40-man roster, he will be able to be on the field when the minor league camp officially opens on Monday.

It’s the reverse of the 2020 season, when Covid cancelled the minor league season and Gorman was forced to watch the big leaguers play while spending his summer at the alternate site camp in Springfield.

There are at least 10 players on the 40-man roster almost certainly headed to Memphis for the regular season, but they won’t be able to play then either if the lockout is still in place.

Gorman, knowing what it’s like to miss a season, hopes that doesn’t happen.

“I think everybody is doing a good job of staying ready so they will be good to go,” he said. “Hopefully something gets worked out soon.”