Despite the temporary shutdown of the major league side of Roger Dean Chevrolet Stadium, the minor league camp is  unaffected and opened Monday on the back fields. Fans were welcome and many commented how great it was to see the red uniforms and the red Cardinals clothes on many who attended. Throughout the day it rained off and on for a few minutes, sending fans under bleachers with overhangs until the rain stopped. 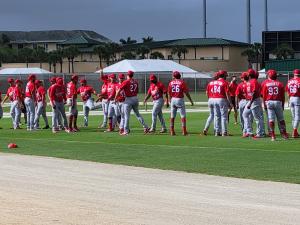 The rain did not dampen their spirits though as many were seen smiling and chatting about baseball. As they saw the various media members, fans would come up and say hello. The mood was casual and happy.

There were about 150 players starting camp on Monday. To read about the players to watch in the Cardinals minor leagues this year CLICK HERE. 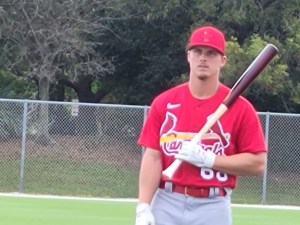 Players like Nolan Gorman, shown right, Matthew Liberatore, Jordan Walker, Masyn Winn and the others  worked out, hit in the cages and did fielding drills.  Many, including Gorman have been in town working out at the Cardinals complex for a while before the official start. To read about how he has been learning from Paul Goldschmidt, CLICK HERE. 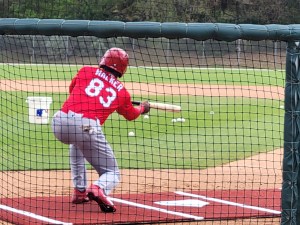 Walker, shown left, is a player all eyes will be on. As chronicled in an earlier article, just a few weeks after Jordan Walker was drafted by the Cardinals, he was invited to be part of the organization’s alternate site camp during the canceled (due to covid) minor-league season.

At the time, then-manager Chris Swauger said “Everything he’s done has been really impressive. It makes you understand why he was drafted where he was.”

As usual the players were spread out over several fields and fans were able to go from field to field with a small set of bleachers at each field.

Four of the managers will be returning to their same team from 2021 – Ben Johnson at Triple A Memphis, Jose Leger at Double A Springfield, Roberto Espinosa at the Florida Complex League and Fray Peniche at the Dominican Summer League. 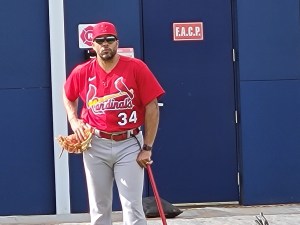 Johnson, show left, the Memphis native and former Cardinals minor league is in his fourth year as manager at Memphis, having started during the 2019 season.

Two new changes to the minor league rosters are:  Chris Swauger at Peoria (High A was replaced by Patrick Anderson,  and Gary Kendall at Palm Beach (Low A) replaces Jose Leon. Anderson and Kendal worked together helping player with their batting.  Anderson is number 22 and Kendal is at the far right of the photo., shown left.

For a complete list of coaches, instructors, medical staff, and other personnel at the minor league level, CLICK HERE. 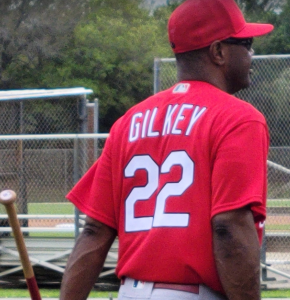 The minor league camp is open every day. New manager Oli Marmol and new bench coach Skip Schumaker are expected to be observers at the minor-league camp. Fans are looking forward to seeing Marmol in his first year. For more on Marmol CLICK HERE.

This year the Cardinals minor league teams are: 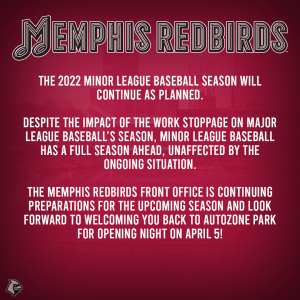 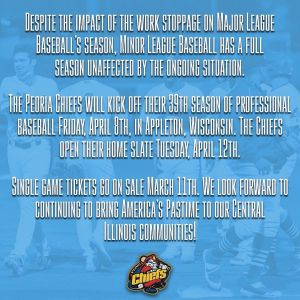 Single Game tickets for the Chiefs go on sale March 11th starting at 10am C.S.T They are running a promotion where you buy a ticket and get entered to win an autographed Jordan Walker or Masyn Winn baseball. They have extended their box office hours and look forward to seeing fans at Dozer Park this season.

Their first game is April 8 at Wisconsin; first home game is April 12 vs. Great Lakes.  To see the Peoria Chiefs Schedule: CLICK HERE.

The Palm Beach Cardinals announced Gary Kendall as manager for the 2022 season, who will serve as the 10th skipper in the club’s 19-year history. The 58-year-old comes to Palm Beach after spending the previous two seasons with the Triple-A Norfolk Tides. Kendall’s stint in the Triple-A East was part of a 17-season tenure as manager within the Baltimore Orioles organization, with previous stops at the Bowie Baysox, Aberdeen IronBirds, Delmarva Shorebirds and Bluefield Orioles.