The Cardinals have been training in Jupiter since Roger Dean Chevrolet Stadium opened in 1998 and visitors who come down for spring training like to tour nearby attractions, but most don’t know about Sports Immortals in Boca Raton, Florida. Boca is just up the road from Jupiter– about 40 minutes– and it is said to be the largest collection of sports memorabilia in the world. Now that we know spring training games will start March 18, there is a little time for those already in Jupiter and someone who loves memorabilia might like to drive over to Sports Immortals.

The museum is in transition, so during this time, visitors need to call ahead for a tour. We were able to get a private showing  with the general manager and some of the things we saw were from the Cardinals: a 1982 Cardinals team autographed baseball and a Stan Musial autographed sign. As with any autographed item, when a person has passed away, their signature becomes that much more special. The autographs of Darrell Porter, Bob Forsch, and David Green can never be gotten today so to see them on the ball with all the others was a treasure as was the unique item signed by Musial.

There was an original painting autographed by Muhammed Ali and Joe Frasier, a letter from President Taft to Jim Thorpe from 1912 congratulating him on winning medals at the Olympics, autographed items from Honus Wagner and Babe Ruth, a tennis racket and tennis outfit from Martina Navratilova and a large wall-poster advertisement for Budweiser signed by Dale Earnhardt. 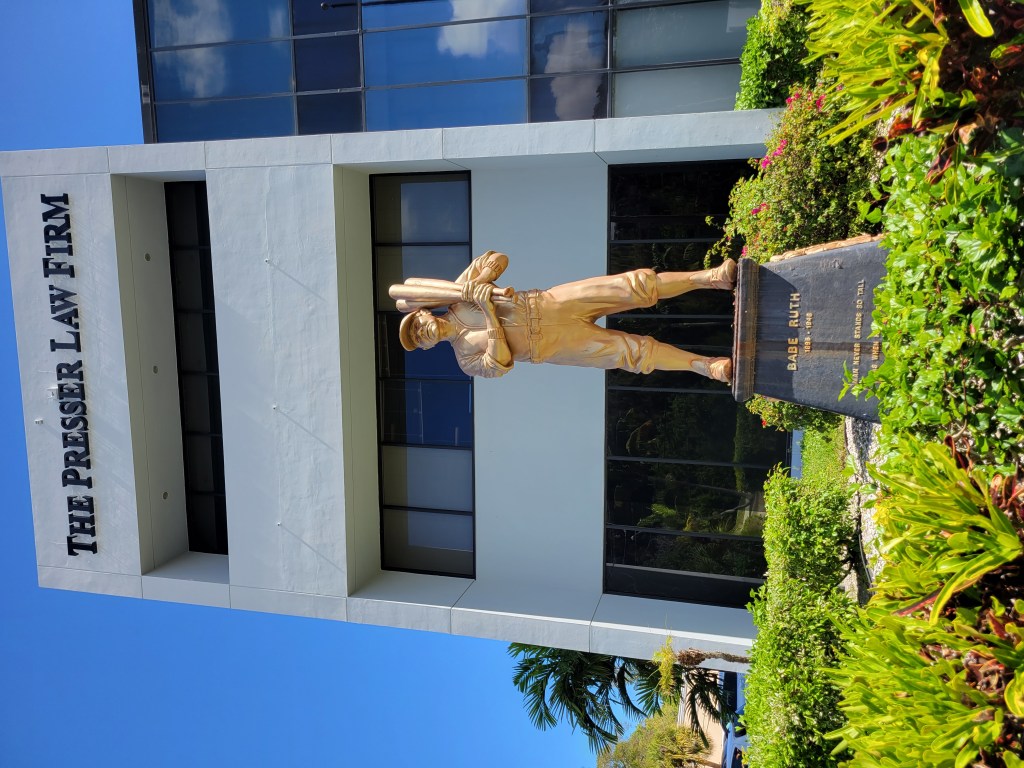 Right now the museum is housed on the third floor of a law firm and there is really only one room open, so those who check it out now will want to come back in the future; as t it will be moving and expanding soon. Outside the building are sports statues, including the one on the left of Babe Ruth which has a special meaning to owner, Joel Platt, (shown left) who has been collecting memorabilia for almost 80 years.

Their Facebook page says, “Joel has spent the last 78 years amassing what the Smithsonian Institution has called the single largest collection on all sports. The collection is called Sports Immortals and it exists today so that the memories and achievements of the world’s greatest athletes will never be forgotten.”

We wanted to take photos to share  them here, but due to the rareness and delicacy of many of the items, they do not allow photography of any type, but the general manager said we could use photos from the website and brochure.

Once our guide started telling us about the museum and all the other items that are not out we were sorry we didn’t get to see the whole collection when it was set out– but we look forward to seeing it all at a later date. It is a $250 million collection with more than a million pieces

Some of the thing we didn’t get to see were Chris Evert’s Wimbledon racquet from her second victory, Jack Dempsey items and Mohammed Ali’s Olympic jacket.

It all started as a labor of love for Platt, when he decided to knock on Mrs. Honus Wagner’s door after her hall-of-fame husband’s death. It was a simpler time back then– she actually answered the door, invited him in and gave him some souvenirs. Platt did not start out to get autographs to sell them, he was merely a fan.  A trip to the museum shows photos of many instances where he walked right up to the person’s door and they actually let him in.

Platt’s story actually starts when he was a sick as a child and confined to bed. He felt Babe Ruth paid him a visit in a dream and told him he would get better and when he did he should play baseball or start a museum. He is shown wth some of his memorabilia in the photo below. 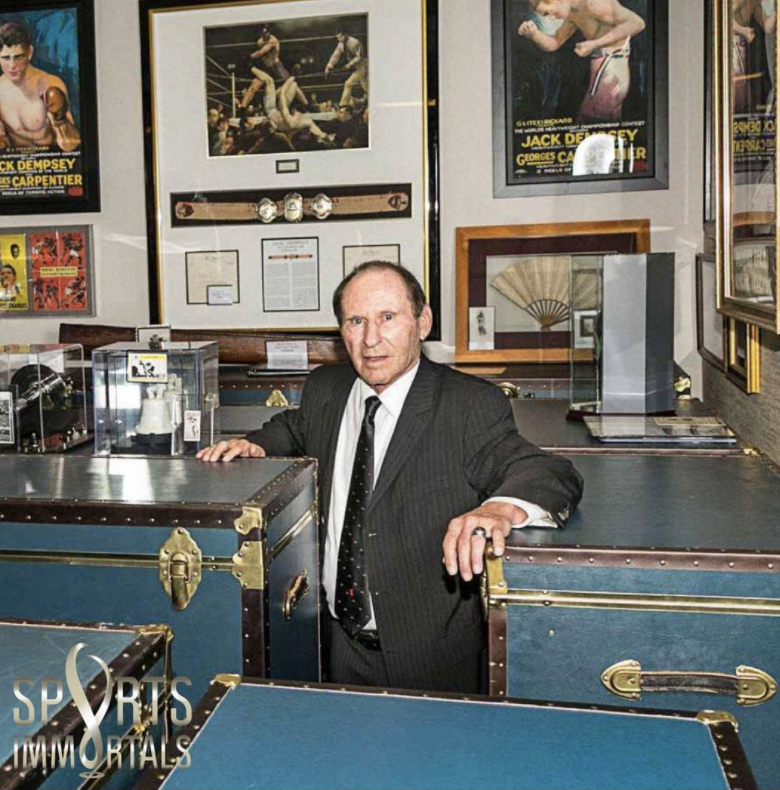 The complete story is on their website, but the rooms we saw were filled with so many things he has collected and there was also a room with items that were for sale. We especially enjoyed seeing the large painting which depicted many photos of the famous people Platt has met in his long career of meeting the famous athletes.

The museum’s mission is: “To utilize the Sports Immortals Assets together with the latest immersive technology to honor and celebrate the greatest achievements of human athletic endeavor by creating entertaining, educational and inspirational projects both in the physical and virtual worlds that will appeal to millions of tourists, sports fans and sports organizations worldwide.”

For a while the museum occupied three floors of the building but currently much is in storage, after they sold the building to start a new venue. Having been located in Boca Raton for over 25 years the Sports Immortals Museum Showcase has recently been relocated to the 3rd floor of the Presser Law Building where it hosts a selection of items from the world-renowned collection. The Museum Showcase also features a memorabilia store with over 10,000 unique and rare items available for purchase. The store buys, sells, and trades rare sports memorabilia and cards.

At this time, most of the collection is in storage, in preparation for the development of Sports Immortals Museum and Memorabilia Mart.

This hopes to be a very exciting destination, almost like a theme park with celebrity autographs, museum tours, party and events center, games, a theatre, sports auctions and more. Stay tuned for more on this place. It will be a fun destination for sports fans.

A reminder to fans that the collection is very limited at this time, but the drive over from Jupiter was not bad and we chose to drive home along A-1A and had very nice views of the Atlantic Ocean on the way back.

For more information and to watch the progress: https://sportsimmortals.com/