JUPITER, Fla. – Nolan Arenado’s second season as a Cardinal could not have gotten off to a better start.

Just three batters into the first spring training game on Friday, Arenado made a dazzling stop to his left for an inning-ending out, typical of many of the defensive plays he made en route to another Gold Glove winning season.

Then in his second at-bat of the spring, Arenado ripped a bases-loaded single that drove in two runs and sent the Cardinals to a 4-2 win over the Astros.

It was a quick return for all of the work Arenado put in this winter, trying to improve on what still was an outstanding first year with the Cardinals following the trade from the Rockies. 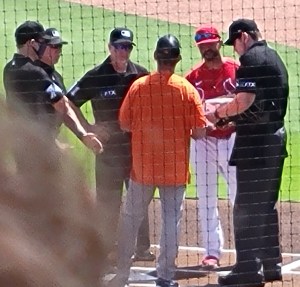 Without getting into too many specifics, Arenado said he changed his training approach to his off-season workouts, concentrating more on his hands than on his legs, which he had focused on more in the past.

“Totally different than what I’ve ever done,” Arenado said. “Just a bunch of little things. Keeping my hands back, and I feel like I’ve done a pretty good job of that. It’s still a work in progress.

“It felt good to be back out there. Fans in the stands. It was fun. It was good to make a play and hit a ball hard. Happy my body feels good after running the bases. It was a good day.”

Marmol thought Arenado fit in well with the Cardinals a year ago but being more comfortable in his second year, on the field and off, could lead to an even better season, he said.

“There’s a couple of things he wanted to address and we’ve been able to see the carryover in his lives (batting practice) and in the game today,” Marmol said. “Combination of some of the things he’s been working on and just feeling a little more settled in a new city. I think both of those things. I never want to put a ceiling on that guy. He’s really good and I think there’s room for him to do an even better job than he did last year.”

Other news and notes from Friday’s game:

High: Non-roster pitcher Aaron Brooks struck out five of the six hitters he faced in his two perfect innings. Combined, the Cardinals’ six pitchers struck out 12 and did not walk a batter.

Low: The Cardinals managed just three hits and had just four at-bats with a runner in scoring position.

At the plate: One of the three hits was a long home run by backup catcher Andrew Knizner which also drove in Paul DeJong, who had reached on a single … Both the single by Arenado, which followed three walks, and Knizner’s homer came with two outs … The Cardinals started their projected opening day lineup, except for Knizner in place of Yadier Molina, and all eight position players got two at-bats … Lars Nootbaar was the DH, drawing a walk and striking out twice in his three plate appearances.

On the mound: Starter Adam Wainwright allowed one run on two hits in his two innings, saying the only one of his 29 pitches that was a mistake was the RBI double he allowed in the second. He threw 23 strikes… The other Houston run came against Matthew Liberatore, who allowed two hits but struck out three in his two innings … Genesis Cabrera and T.J. McFarland each worked a perfect inning in relief … The other out recorded by Brooks was on a grounder back to the mound.

Off the field: Jack Flaherty received a PRP injection in his sore right shoulder on Friday and will rest with no throwing for two weeks, the Cardinals said, before determining the next steps and a timetable for his rehab and recovery … Alex Reyes also won’t be available when the regular season begins after getting an injection in his shoulder on Wednesday. Reyes also has been told to rest for two weeks and hopefully will then be able to begin a throwing progression … Molina, who has yet to report to camp for unspecified personal reasons, is expected to be in camp on Monday, Marmol said … Outfielder Corey Dickerson officially signed a one-year contract after reporting to camp and passing a physical. The lefthanded hitter is expected to be a backup outfield and also be used as a DH during the season … Former Cardinal Matt Carpenter signed a minor-league contract with the Texas Rangers. He lives the Dallas area.

Looking ahead: Saturday will be a camp day for the Cardinals before their spring schedule will resume on Sunday with a game against the Mets in Port St. Lucie. Miles Mikolas will get the start.