In last week’s Cardinals- Royals series, most Missourias had a team they were rooting for, but David Brown is a fan of both of them.

St. Louis native and three-time track and field Paralympian David Brown has lived in both towns for a while and roots for both teams.

“I like baseball and I root for both the Royal and Cardinals,” he said. “I’m for Missouri.” 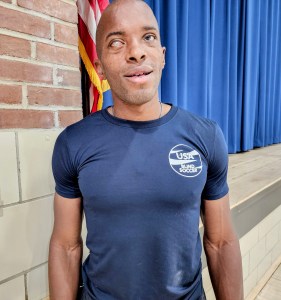 Brown is one of six athletes with the honor of being named an ambassador  for the U.S. Association of Blind Athletes (USABA) as they begin their entry in the world of soccer for the Paralympics.

As the newly-certified National Governing Body for the Paralympic sport of blind soccer, the USABA appointed six individuals to act as sport ambassadors.  Though Brown is not known for playing soccer, he is a leader for blind athletes and really any athletes everywhere. The addition of Brown as an ambassador will likely boost and draw attention to the fledgling sport of blind soccer as Americans take it to the elite level. Once fans see Brown on the soccer field the interest in the sport will grow.

Imagine playing soccer and not being able to see the ball or the other players. These are things that sighted people take for granted and things that visually impaired just work around. He has been working around what others would call obstacles all his life, but with the positive attitude he has he has accomplished more than most people his age.

Brown, a graduate of Hazelwood West High School is a three-time Paralympian in track and field, and a 2016 gold medalist in the 100 meters.

The 29-year old is quite well-rounded and along with sports he enjoys playing the drums, piano and tenor saxophone and has been in bands.  His mother, Francine was from Kansas City, but realized how valuable the Missouri School for the Blind would be for her son so she moved the family to St. Louis when he was 11 years old.

Brown recently posted on Facebook: “Crazy how all the greats I’ve studied and study all say the same thing. The work ethics, same. The mental, same. The mind drives the body. Everyone wants it and can even work for it. But that mental is all jacked up. Where is your focus?”

It has been has strong mental toughness and mindset that has gotten him to where he is today, and also the strong support of Francine through the years. To his post, she replied: “Stay on course, stay focus and always keep looking up! Enjoy your journey getting back on track.”

David Brown was diagnosed with Kawasaki disease at 15 months old, resulting in glaucoma which eventually led to surgeries including losing an eye and eventually the disease took his sight by the age of 13. His mother found him help in Kansas City but after research she knew the best thing for him was to move to St. Louis and that set him on his Olympic path.

“I did all the sports offered by Missouri School for the Blind,” he said. “Track, goalball, wrestling, swimming and forensics.”

He started with wrestling and goalball. Goalball is a team sport designed for blind athletes. It was devised by two people in Germany in 1946 in an effort to help in the rehabilitation of visually impaired World War II veterans. The object of the game is to “roll” a ball which contains bells past the opposing team. The goalball may have given him the groundwork for learning soccer.

Growing up visually impaired, children often hear “watch out” or “don’t do that” but once they get to the Missouri School for the Blind they find out they are like others and if they like sports, feel free enough to blossom. How do they do it? Several ways, but if they want to run fast, they might old on to a rope that is connected from one end of a field to the other or run on the arm of or holding a rope tether with a sighted runner to get the confidence to be able to do it.

Once Brown learned of the opportunities available in Track and Field that is where he settled and has earned many medals and honors including a gold medal at the Paralympics. He first became a Paralympian — which had been a dream of his– after winning an essay contest to attend the Paralympic Games Beijing 2008.

Entering an essay contest was easy for him as writing has always been an interest to him. In high school he participated in forensics and liked writing speeches and poetry.

It seems Brown’s entire life has been on a road that prepared him for the next thing– including the pandemic. The Missouri School for the Blind prepared him for Hazelwood West High School, and once he graduated, he was invited to live and train full-time at the Olympic Training Center, now the Chula Vista Elite Athlete Training Center, in California. That move put him on the path to eventually met his wife.

It was through working out at the Training Center that he was in the Paralympics in 2012 (London), 2016 (Rio), 2020 (Tokyo). At one point he become the fastest totally blind athlete in the world, holding the world record and winning Paralympic gold alongside his sighted guide Jerome Avery.

Brown along with his wife Rebekkah Brown, (shown in photo, left)who has competed nationally as an Archer, have started a coaching program and a website called Team DR Brown. Their theme is: Faith, fun, fitness, and food. One thing they advocate is the power of jumping rope for health.

After the 2021 Paralympic Games, David and Rebekah earned their certifications in jump rope training through the Buddy Lee jump rope training system: Jump Rope Training Fundamentals. And while others may have been stymied by the pandemic, they were starting their company in 2021.

And despite not being able to train with his running partner, Jerome Avery, to whom he is tethered to during the races and has shared the medals with, he continued working out, doing what he could. Avery and Brown are the defending gold medalists in the 100-meter dash.

His trainer, Joaquim Cruz– the 1984 Olympic champion in the 800 meters from Brazil– encouraged him to do what he could despite the fact that gyms and tracks were closed due to COVID-19. Brown, Cruz and Avery are a three-person team and with all the restrictions and social distancing being put on it was impossible for them to train together but Cruz put together a workout plan they could do separately.

Cruz told Runners World Magazine that he said this to Brown:  “The virus will separate the winners from the losers…You say, ‘Our dreams are bigger than this.’”

Brown has participated in several blind soccer camps in the past year as he looks to add this second Paralympic sport to his resume.

If you think David Brown has an amazing story, stay tuned, he is in pre-production for a documentary on. his life which will air on YouTube. We’ll keep you posted about that, but meanwhile he is finding time to be the soccer ambassador.

Throughout the year, the five athletes and one coach will assist the organization in spreading awareness around blind soccer programming and other initiatives via digital content and in-person appearances. 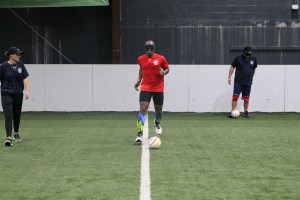 Blind soccer has been part of the Paralympic Games since 2004 but the U.S. has never fielded a team in international competition. That will all change in the coming years as USABA develops a national team to compete as the host nation of the 2028 Paralympics in Los Angeles. In December of 2021, it was announced that theUSABA has received the highest level of certification from the United States Olympic & Paralympic Committee to become the national governing body for blind soccer, globally known as blind football, a sport in which Team USA will make its Paralympic debut as the host nation of the Los Angeles 2028 Games.

The other athletes who will serve as ambassadors along with hm are Kevin Brown (Falls Church, Va.), Ricardo Castaneda (Fort Worth, Texas), Bailey Martin (Hubbard, Iowa) and Casimir Werda (Novi, Mich.). They are joined by coach Katie Smith (Columbus, Ohio). Four of the six ambassadors recently took part in a milestone moment for the sport as USABA conducted its first blind soccer talent identification camp since being certified by the U.S. Olympic & Paralympic Committee as the sport’s national governing body. 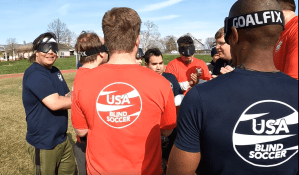 David Brown, Castaneda, Martin and Werda were among 12 athletes who took part in the April 8-12 camp at the Maryland School for the Blind in Baltimore.

Kevin Brown, 50, competed in soccer and other mainstream sports through high school and college. He has been legally blind since the age of 7 due to cone/rod dystrophy, a degenerative genetic eye disorder. Brown held the USA Track and Field record in the pentathlon and is also a member of the U.S. National Blind Hockey Team.

The 21-year-old Castaneda has been personally spreading the word about blind soccer for the past several years. Diagnosed with pars planitis at the age of 4, Castaneda developed glaucoma and was blind by the age of 15. He is currently studying kinesiology in college with plans to become a physical therapist.

Another college student on the ambassador team is the 19-year-old Martin. A freshman at the University of Northern Iowa where she is studying communications and sports relations, Martin’s love for sports grew even stronger after becoming visually impaired as a teenager. She has been involved in beep baseball, track, swimming, goalball and now blind soccer.

Werda, 38, lost his vision from an IED explosion in Iraq in 2007 while serving in the U.S. Army as part of Operation Iraqi Freedom. He has played goalball for many years and now holds a special place in his heart for blind soccer.

Smith, 28, is the soccer coach of Ohio Blind Soccer in Columbus. She began coaching the sport after attending a USABA blind soccer camp in 2018 and has been involved in numerous national development camps and clinics. In addition to her blind soccer coaching duties, Smith also organizes other recreational sports and activities for blind athletes within Columbus.

The mission of USABA is to empower Americans who are blind or visually impaired to experience life-changing opportunities in sports, recreation, and physical activities, thereby educating and inspiring the nation. A member organization of both the United States Olympic & Paralympic Committee (USOPC) and US Soccer, USABA is certified by the USOPC as the national governing body for the Paralympic team sports of goalball and blind soccer. Since its founding in 1976, USABA has reached more than 100,000 individuals through its multi-sport programming in eight sports. The organization has emerged as more than just a world-class trainer of blind athletes, it has become a champion of the abilities of Americans who are legally blind. In 2022, USABA expanded its offerings of endurance sports events with the launch of its Team Tethered Together program for visually impaired runners and their guides. Learn more at www.usaba.org/.

Soccer for the blind and partially sighted began in schools for people with visual impairments. Spain is considered to be the pioneer of the sport having started playing in the 1920s. The first national championships occurred in Brazil in 1974. In 2004, blind soccer made its Paralympic debut at the Athens Games. IBSA blind soccer is for players that have severe visual impairments. They are known as B1 athletes.