It was a phone call Tyrone Horne was happy to make, and one Chandler Redmond definitely wanted to answer.

Horne placed the call on Saturday from his home in Idaho to welcome Redmond into what might be the most exclusive club in baseball. Until Wednesday night, there had been only one member for the last 24 years – Horne.

Playing for the Cardinals’ Double A affiliate, then in Little Rock, on July 27, 1998 Horne became the first – and until this week – the only person in professional baseball history to hit for the home run cycle in a game – a solo homer, a two-run homer, a three-run homer and a grand slam.

Redmond matched that feat, and there are “crazy” similarities between how the two did it.

Redmond, 25, also plays for the Cardinals’ Double A affiliate, now in Springfield, Mo., in the same league, the Texas League. Both Horne and Redmond hit the four home runs in a game in Texas, Horne at San Antonio and Redmond in Amarillo.

Perhaps most bizarre of all, their home run combinations came in the same exact order – a two-run homer, a grand slam, a solo homer and then a three-run homer that completed the cycle.

And neither Horne or Redmond had ever hit three home runs in a game before in their life.

“When I saw the news I said, ‘Wow.’ I didn’t think that would ever happen again.”

Horne, now 51 and a social worker and youth baseball coach in Idaho Falls, Idaho, found out his club had doubled its membership through a phone call early Thursday morning from his best friend, Mike Hardge, who was his teammate on that July night in 1998 – and was on-deck for each of Horne’s home runs.

“He called me at 6 a.m. and I was sleeping, but the second time he called I answered and he told me,” Horne said. “I got on the internet and saw it. It’s a crazy thing, a rare achievement. It’s something you can remember for a long time.

“I told my daughter, ‘There’s nothing wrong with sharing it.’ It’s something you can never fathom happening twice, or really once.”

One fact Horne learned in his phone conversation with Redmond was that Redmond went to college at Gardner-Webb in North Carolina, where Horne grew up – and had once applied for a job at that school.

Despite all of the similarities to their historic nights, there are differences between the two, starting with the fact that it wasn’t until after his game was over that Horne began to understand the magnitude of what he had done – while watching television.

“All I knew was that I had hit four home runs,” Horne said. “Running around the bases after the last one, I was shocked. I was excited. I did a couple of interviews and then I sat down to eat in the clubhouse. Sportscenter was on ESPN and there I was running around the bases. I jumped up and went and called my mom.

“I had never heard of it … It had to be a perfect setup for it to happen. The whole night was just crazy.”

Redmond did think about what was happening as his game was going on. Unlike Horne, he had heard about the home run cycle.

“I only knew about it because I saw several years ago that a college softball player did it,” Redmond said. “That was the first time I heard of it. It kind of went viral, and I saw it.”

That memory came flashing back in Redmond’s mind.

“After the grand slam, I figured that has got to be the hardest one to get,” Redmond said. “Once I hit that one I thought, ‘Maybe I can do it,’ and just as quickly thought no, that’s crazy talk. This was only the second two-homer game in my career, and I’ve got to hit two more, and they’ve got to be a solo homer and a three-run homer? Everything had to line up just perfect.

“Once I hit the solo shot, I was like, ‘Oh my gosh, this can really happen.’ I got lucky. God put the right pieces in place for me.”

It also took the help of his teammates, considering Redmond’s first home run did not come until his third at-bat, in the fifth inning. He then got up to bat again in the sixth, seventh and eighth innings.

“It felt like we were batting twice in every inning,” Redmond said.

To get the proper combination of runners on base for each homer, however, also required the help of his teammates – without them even realizing they were helping.

Before Redmond’s first home run, the two-run shot, Matt Koperniak was thrown out trying to steal third base – or there would have been two runners on base instead of one.

Before the last home run, the three-run shot, Nick Raposo had to be retired, which happened on a line out, to keep the two runners on base for Redmond to hit the three-run homer.

“That was just all a crazy part of it,” Redmond said.

“We started talking, and the guys knew I was having a good game, but I told them, ‘I can hit for the home run cycle,’ almost joking. I told a couple of guys I could do it, and the whole dugout knew what was at stake (in the last at-bat).

“The funniest part was the guy on the mound was a two-pitch guy with a fastball and curveball. He goes curveball for strike one, then another curveball for a ball. Everybody in the park knew a fastball was coming. He’s not going to throw three curveballs in a row.

“The catcher goes, ‘Well, here we go’ and I hit the home run. As I was running to first I pointed into the dugout and my teammates and everybody was just going nuts.”

While it took all of that for Redmond to complete the home run cycle, something unusual about Horne’s accomplishment happened before his historic game. 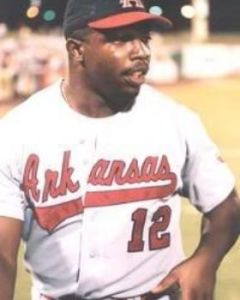 “What people don’t know is I didn’t want to play that night,” said Horne, who had been up much of the previous night dealing with some personal family issues. “My intentions were to come to the ballpark and ask the manager to give me the day off. When I got to the ballpark and saw I was in the lineup I just said ‘screw it.’

“Then I went out and had probably the worst batting practice I’ve ever had. I was hitting the ball like Wesley Snipes’ character in Major League. I told Mike (Hardge), ‘This is going to be a long day.’ I was tired, I was mentally drained. I didn’t want to play.

“When I hit the first one I was kind of shocked. The second one was the grand slam, and I was like, ‘Oh my God. Wow.’ Before the third at-bat I told Mike, ‘I’ve never hit three home runs in a game before.’ He said, ‘You need to try.’ The first pitch, it went over the wall in right center.”

“I remember very succinctly after he hit his second home run, the grand slam, so he had six RBIs on the night, saying to myself, ‘I need to say something to Tyrone to keep him going,’” Maloney said. “A guy who has six RBIs and two homers can tend to relax and say, ‘I’ve had a good night’ and take the next at-bats off. I remember saying, ‘Listen Ty, keep it going man, have a monster night.’

“He looked at me like, ‘Thanks Skip, I’ve already had a monster night.’ I said, ‘Six (RBIs) is good, try for seven.’ I was just trying to keep him going.

“The odd thing about it was that ballpark in San Antonio was a notorious pitcher’s park, the only ballpark in the West (division) where pitchers had an advantage. The wind was always blowing in. It was hard to go out of there … That night, it wasn’t blowing as hard as usual.”

After hitting his fourth homer, Horne actually came up to bat one more time, in the ninth inning, but struck out. He then had to get on the team bus for the overnight trip back to Little Rock, where the next night, he won the Home Run Derby in advance of the league’s All-Star game.

While there, he found out that his bat from the home run cycle game was being sent to the Hall of Fame in Cooperstown.

It soon will be placed next to another bat – the one Redmond used on his historic night – forever linking the two members of their exclusive club.

“I think that’s even crazier to me than the four homers, it’s absolutely surreal,” Redmond said. “I can’t even describe how it feels knowing that something of mine is going to be in the Hall of Fame.

“I called my wife (Kristan, at their home in Columbia, S.C.) and my baby boy (three-weeks old Walker Brooks) was sleeping, and I just looked at him for a little bit and got to soak it in with my wife. We just kind of celebrated together over the phone. When we hung up I played Fortnite with Nick Raposo, just like every night.

“It’s wild. It’s something that’s so crazy you can’t even dream of it … I think it will hit me even harder when I’m older and I go to Cooperstown with my little boy and take a picture of him with my bat. It’s going to be pretty special.”