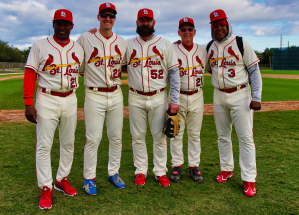 Getting to go to the St. Louis Cardinals Fantasy Camp for a second time was a dream come true for St. Louis native and life-long Cardinals fan, Mike Kaiser.

“I went to the 2005 Fantasy Camp with my father,” said Kaiser who now lives in Papillion, Nebraska. “I decided to take my son, Stephen and his family in 2019 after I retired in 2019.. Stephen lives in Virginia so we met in Jupiter. It had been such a fantastic experience with my Dad that I wanted the opportunity to go with my son.”

His wife Karen filled in the rest of the story.

The trip meant so much to him that he figured out a way to make the finances work out. Who could have known that the trip truly was a “once” in a lifetime for the father and son duo.

“It meant so much to them that when his Dad died in 2006, he was buried in his Cardinal Fantasy Camp jersey.”

He wanted that “once in a lifetime experience” to get repeated– but once again he had to figure out how he was going to go– this time for a different reason.

“In 2017, Mike was diagnosed with prostrate cancer,” said  Karen, “He decided that when he got his strength back after chemo, surgery and radiation, he would like to take our son to the Cardinal Fantasy Camp. Well, Mike got his strength back, and our son met the age requirement, so in 2019 our family headed back to Florida.”

Memories were made for the next generation, as the whole family went to Jupiter, and he even got to run the bases with is grandchildren. The photo, below says it all. 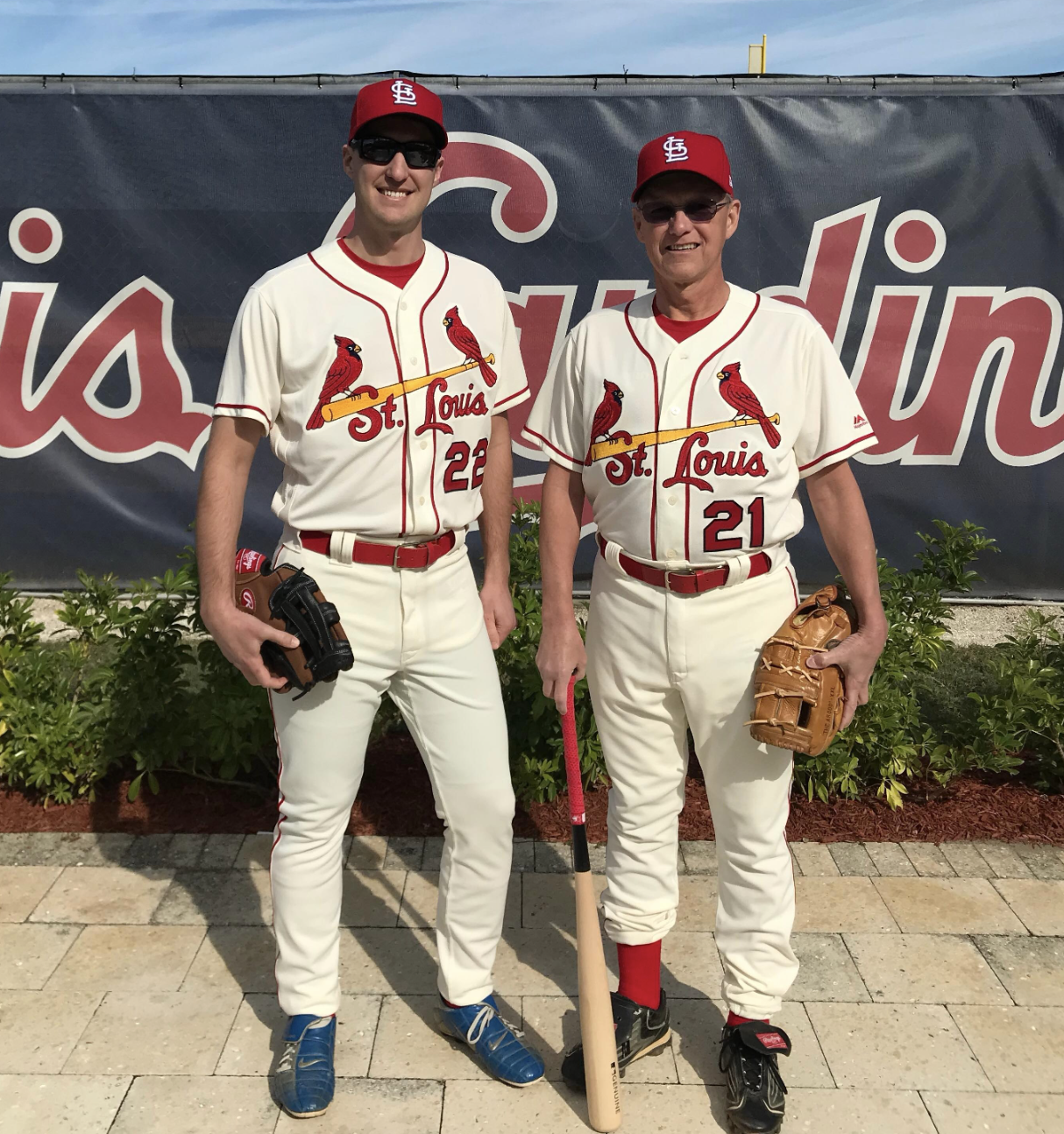 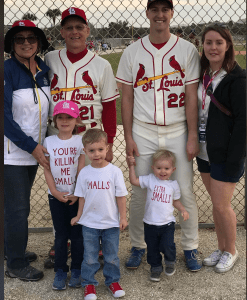 “In the picture with the grandkids  (shown let) are my wife Karen, me, Stephen, his wife Becca,” said Mike Kaiser. “In front are Emmalynn (you’re killing me smalls), Weston (smalls), Braxton (extra smalls) and the picture is me playing first base.”

As mentioned, it’s not cheap to go to a Fantasy Camp, but Kaiser says it was money well spent.

“It was some of the best money I’ve ever spent,” he said, “We got to interact with Cardinal legends and were treated like one of the guys”

They also had the family together so each member got to experience a part of the trip.

Stephen Kaiser posted the group photo, right, on Facebook with this caption: “Pop and I with the Cardinal Legends from our team (left to right: Tito Landrum, me, Josh Kinney, Pop, Brian Jordan.”

It was a special time for everyone in the family for obvious reasons, but the biggest one was just the “father-son” tradition that so many Cardinals fans enjoy due to the love of their favorite team being handed down from generation to generation.

“Both trips were wonderful with great memories,” said Karen Kaiser.

Mike hopes to go to another one. Who knows, maybe he will take the grandkids.

There are many stories of what the experience of a Cardinals Fantasy Camp can mean to a camper and when the campers returned home from Cooperstown last week they were full of memories. 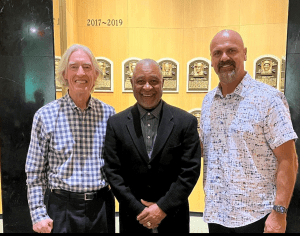 Imagine being in Cooperstown and getting to see Ted Simmons, Ozzie Smith or Larry Walker’s plaques on the wall. Then imagine they were standing right next  to you, and you could get your photo with them. That is exactly what people who went on the recent Cardinals Hall of Fame Fantasy trip got to do. The photo, right shows the former Cardinals greats in front of the plaques at the Baseball Hall of Fame. 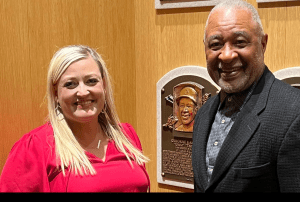 The Sept. 2022 Hall of Fame trip was just one of the exciting camps the Cardinals offer with unique opportunities for baseball fans to play ball with their favorite former players and feel like a major leaguer for four days.

Whitney Clark who works in the Cardinals front office gets to set up the logistics of the camps and go on the trips. She sees how special the experiences are for the families.

“For the campers this is a once in a lifetime experience to live out their dream of being a major league baseball player,” said Clark. “We have many campers who get to share this opportunity with their parents, siblings and friends. Once you participate in a Fantasy Camp you become a member of the camp family and create many connections and friends throughout the experience.”

The Hall of Fame trip was recently added to the other camps which include one in Jupiter, Florida where campers get to experience playing on the field at Roger Dean Cheverolet Stadium and one in St. Louis where players get to play at Busch Stadium.

Campers are provided full authentic uniforms, access to a major league experience with credentialed athletic trainers and clubhouse staff, entered into a draft, and play games with and against famous former players. Camp includes not only an authentic on-field experience, but baseball themed evening events with Hall of Fame guests and captivating panels.

The camps have grown in popularity over the years and more dates are added to the calendar each season to allow more of Cardinals Nation the opportunity to participate in such a special experience. Kaiser said he noticed there were people from corporations that were there.

The team currently offers a camp in Jupiter Florida, their Spring Training, hone, plus a camp at Busch Stadium and the one in Cooperstown, NY. These camps offer sponsorship opportunities for a variety of different organizations looking to reach out to this group of diehard baseball fans.They are also used as incentive trips by some corporations.

“I did notice some of the spots are are going to corporations as bonus’s for employees,” said Mike Kaiser. “It was somewhat harder o get a spot in 2019 compared to 2005. ”

The camps have gotten more exciting as the years go by and In 2014 the Cardinals joined forces with Mercy Hospital, so that a portion of the proceeds from Fantasy Camp benefit Mercy Cardinals Kids Cancer Center in St. Louis.

To find out more about the Fantasy Camps CLICK HERE.