Cardinals stadium announcer John Ulett has been part of the team for 38 seasons and is hoping to add another World Series ring to his collection. If you are from out of town and just hear him when you come to Busch Stadium you may not know he’s also a radio personality at KSHE Radio– whose longtime motto has been “Real Rock Radio.” The public is invited to celebrate KSHE’s great heritage of music in St. Louis along with Ulett and other disc jockeys. 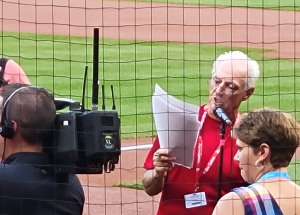 He’s long been known as the on-field announcer and he also stars in the television show “Cardinals Kids” as Professor U-man, but Ulett started his career as a rocker. More than 46 years ago at just age 19 he started at the popular KSHE-95.

On October 7, Ulett will be re-living some of those early memories from KSHE as the radio station will host current and former on-air personalities plus representatives from some of the most popular bands from the early days,  for “More Stories from the Window.”

“I’m not the only emcee,” said Ulett, “There are a few others but for me it’s just a chance to tell, and in my case retell some of the current and former jocks’ favorite stories regarding the station and the many rock bands that KSHE was instrumental in helping become great bands.” 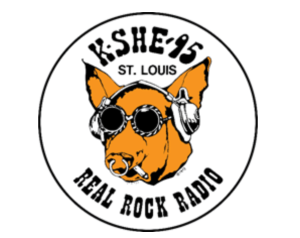 Of course with the event being held in October there is the concern that Ulett could miss the event because of the Cardinals in the post-season.
“Everyone at the station understands and we do have others who can do my role,” said Ulett who is enthusiastic about what the event is trying to do.  “I think people who attend will quickly see the importance to Rock and Roll that KSHE was. Fans will be exposed to how much fun we all had being a part of the stations great history.”

The evening will includes detailed history and highlights that has made KSHE-95 known as one as one of the most legendary rock stations in the country. Also included in the evening will be special guests from bands Mama’s Pride, Gypsy, Pavlov’s Dog and El Monstero. Local band Rockin’ Chair will provide music for the night.

“KSHE fans of all ages are in for a treat, as the guests on stage will range from the early days in the 60s all the way through today.” said Program Director, Marty Linck.  “It will be a rare peak into 55 years of behind-the-scenes shenanigans that took place at a radio station most of us grew up with.”

The night will include a cast of characters which includes some of the most famous names in St. Louis broadcasting history. Scheduled to appear:

DETAILS FOR THE EVENT: