In the Hanukkah story one tiny jar of oil keeps the lamps burning for eight full nights. Since Hanukkah celebrates this miracle, it’s traditional to eat foods fried in oil as part of the festivities. To celebrate the culinary tradition of featuring fried foods during the eight days of Hanukkah, the Los Angeles PJ Library Connector Jennifer Stempel, aka the Cuban Reuben, has shared a few kid-friendly, easy to prepare, Hanukkah recipes that make preparing fried foods easy.

Sufganiyot, the traditional jelly donut some described as a cross between a beignet and a jelly donut, is reimagined and easy for anyone. The Nutella Pockets  are another fried treat, which brings something different to the table. 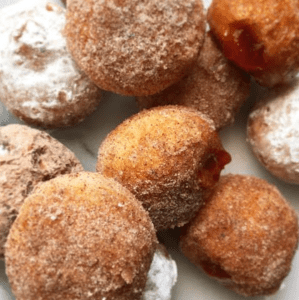 In a large sauté pan (or electric skillet), add enough oil so that it is about one inch deep. Heat over medium high heat (between 375 and 400 degrees).

Roll out pizza dough until it is about ½-1 inch thick. Cut rounds of dough using a one-inch cookie or biscuit cutter. If you’ve got a kid helper on hand, pass off the cookie cutters and put them to work, just make sure a grownup does the next step.

Carefully place each dough round in the oil and cook about 1 minute per side. Remove the rounds from the oil and place them on a plate lined with paper towel.

Now it’s time for your toppings! Combine the sugar and cinnamon in a bowl, and while the rounds are still warm, roll them in the mixture to coat. Serve immediately. 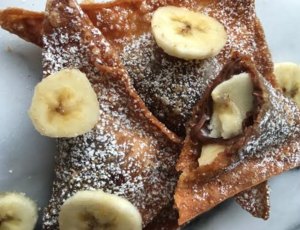 In a large sauté pan (or electric skillet), add oil until it is about 1 inch deep. Heat over medium/high heat (between 375 and 400 degrees).

Lay wonton wrapper flat. Add 1 teaspoon of Nutella, and top with a banana coin. Dip your finger in the egg and run it along the edges of the wrapper. Fold the wrapper in half to form a triangle. Push down the edges to seal.

Fry each wonton packet in oil, about one minute per side, and drain on a plate lined with paper towel. Top with a dusting of powdered sugar. Serve immediately.