Christina Whitlock will be serving as the fourth coach for the Peoria Chiefs this season, the first uniformed female coach in the Cardinals organization’s history. Rob Rains did a feature on her last year when she was working for the team in Jupiter.

There has been a lot of attention paid this spring to two women working in baseball in groundbreaking roles, as a minor-league manager and as a major-league coach, which could pave the way for more opportunities in the game for women in the future.

While Rachel Balkovic, a former strength and conditioning coach in the Cardinals’ farm system who is now the manager of the Yankees’ Class A team in Tampa, and Alyssa Nakken, an assistant coach with the Giants, have grabbed the national headlines, another woman quietly has begun working for the Cardinals – and Christina Whitlock has her own story to tell.

Whitlock is working as a “tech fellow” for the Cardinals, based at the team’s complex in Jupiter, Fla., a program that has replaced what the organization called the “fourth coach” role in the past. That program was a hybrid coaching and scouting position at the minor-league affiliates, designed to bring people into the organization and expose them to a variety of jobs.

Two years ago, Whitlock was supposed to be a fourth coach – until Covid canceled the minor-league season – but that didn’t cancel her dreams. It was just one more challenge she has faced in her life.

“I was a little discouraged,” she admitted, “but my thoughts never went to, ‘Oh the door closed.’ If anything I just had to reorganize my perspective. Honestly 2021 gave me the opportunity to graduate my two boys. In hindsight that’s why the doors didn’t open in 2021. I had a bigger priority than baseball.

“I truly believe in God’s timing. I believe I’m right where I need to be.”

A woman of deep faith, Whitlock is different than many people just beginning a career in baseball. She is 47, and has spent two decades coaching softball at the high school, college and international level following her playing career, where she was a two-time All-American at South Carolina.

She also is a single mother. Her husband Brian died in 2002 from an undisclosed heart ailment. The couple was married for just five years before his death, which came nine days before Whitlock gave birth to their second son.

“I was very fortunate I had a very good marriage and have two wonderful boys,” Whitlock said. “They are the only two grandchildren in the family so they get to carry on the family name.

“I’ve just come to realize, and it doesn’t have to be morbid or grief stricken, but it’s easier to just ebb and flow with life. You play your best ballgames when you ebb and flow as well. We can cross all our T’s and dot all our I’s but honestly once you step foot on the field, whether it’s in technology or whether you’re playing, the game unfolds and you’ve just got to move with it.”

Because of her age, and her life experiences, Whitlock says she might have a different perspective than some of her female colleagues about the challenges women face working in baseball.

When she was offered the fourth coach position, she spent time praying about the decision before coming to the realization that she was supposed to take the job.

“If I wanted to make an impact, this is where it was going to be,” Whitlock said. “I had my hands in a few different things trying to figure out which niche in baseball would be the best for me to make an impact.

“I personally approach things a little differently. Something somebody else might see as a challenge I may not. … I’m very much about going with the flow of things – making a right turn here or a left turn there to change direction.

“That’s why a five-year plan doesn’t always work. I just know things change. They can change at any moment. I take a different approach in laying out my plans.”

Whitlock brought that attitude to her new job, which basically is to capture data and video on players throughout the organization so it can be analyzed and used for evaluation purposes. 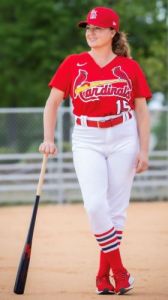 Even though her career has been spent almost entirely on the field, learning more about the technology available in today’s game has been exciting for Whitlock.

“It was the open door, and I had always been told if you want to get in baseball be prepared to take advantage of the opportunity that comes your way,” Whitlock said. “My interest in baseball is very different. To me it’s a calling.”

Whitlock was introduced to the Cardinals, and to baseball’s programs in diversity and inclusion, by late scout Charles Peterson, who died from Covid in 2020. The two worked together at a training facility in South Carolina.

“Our paths crossed, and I started doing some birddog scouting for him,” she said. “He shared with me about opportunities and I applied … He was my mentor and a very dear friend. I miss him dearly.”

When Whitlock lost the opportunity to be a fourth coach, she still did some scouting and preparation work for the 2020 amateur draft. She did more birddog scouting, on the professional level, on her own in 2021 trying to broaden her experience and development.

The new opportunity came this spring with the Cardinals. Many of the men who filled the fourth coach role in the past used the job as a steppingstone to other roles in the organization. Whitlock is hoping to do that too – with her ultimate goal to become a pitching coach, manager or to work in the front office and player development.

She knows there will be more challenges and obstacles in the future as her career path progresses, but she doesn’t think being a woman really will cause many issues.

“From day one I have never experienced anything that would make me feel my gender was an issue,” Whitlock said. “I grew up as a tomboy. I played baseball when I was young and in high school and I was very fortunate. My colleagues and teammates competed against each other to make one another better. I feel the same way in this environment … I grew up a military brat. I went to seven elementary schools. In many ways, the Lord and my experience, I’ve been prepared to do this.

“It’s about being very versed in whatever skill you have and sharing your perspective and experience. Being able to collaborate and give a different opinion I think is very much needed.”

While doing her own job, Whitlock also has been keeping an eye on the success of both Balkovic and Nakken. She has met Balkovic on a couple of occasions, and Nakken is a former player on a national team Whitlock was coaching. Whitlock met Balkovic through Kelly Rodman, one of the first female scouts in baseball, who died from cancer in 2020.

“Many of the women involved right now are doing so well,” she said. “I think they are proving they can exceed expectations and produce quality work. I think there will be more women taking advantage of opportunities as well.”

Two people who are excited to see women making strides in the game are John Mozeliak, the Cardinals’ president of baseball operations, and the major-league manager, Oli Marmol.

“Someone who understands baseball curriculum or baseball fundamentals, and understands how to think about managing a game, regardless of whether they are a male or female I think anyone could do it,” Mozeliak said. “Obviously they are going to have hurdles just because it’s never been done but the fact that more women are getting more opportunities in the game, I think that’s great.”

Marmol’s connection to Balkovic began a decade ago, in 2012, when he was a rookie manager in rookie ball in Johnson City, Tenn., and she was his strength and conditioning coach. She also worked as a roving coach in the organization in 2014. 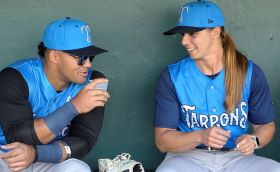 “Rachel is a really hard worker who had a vision that no one else had for her, which is what drives her,” Marmol said. “She knows what she wants to do in this game and it was different than what everybody else anticipated.”

Marmol believes other women with that same desire – which includes Whitlock – can achieve the same success if given the opportunity.

Whitlock considers the best part of her job – so far – the opportunity to meet and learn from others who have spent their lives working in the game.

“Their number one piece of advice was just to jump right in and participate,” she said. “They have passed along little nuggets of wisdom that they learned from so-and-so, who learned it from so-and-so. That’s been one of the most helpful things – it’s been unmeasurable.

“I’m very grateful for this experience and this opportunity.”