JUPITER, Fla. – The back fields at the Roger Dean Chevrolet Stadium complex will be filled with Cardinals’ minor leaguers later this week, none of whom will likely be more motivated than Griffin Roberts.

It’s the first time Roberts will be wearing a Cardinals’ uniform since finding out over the winter that he would be suspended for the first 50 games this season for failing a drug test when he tested positive for smoking marijuana.

“Not only did I let myself and my loved ones down but I let a lot of people in the organization down, some of them people I don’t even know that well,” Roberts told STLSportsPage.com. “They expect me to be a good baseball player and not some kind of delinquent off the field that’s messing up his opportunities to be on the field.

“For me a lot of the motivation is righting the wrongs in those relationships. Those people don’t really know who I am off the field or on the field. They just know me as a guy who got suspended who was supposed to be good.”

The Cardinals thought highly enough of Roberts to use the 43rd overall pick in last summer’s amateur draft on the right-handed pitcher following his junior season at Wake Forest. Aware of the number of innings he pitched during the spring college season, they brought Roberts along slowly last summer with the rookie-level Gulf Coast League team.

He did not make his professional debut until Aug. 3 and pitched in just eight regular-season games, including throwing one inning for the Class A Palm Beach Cardinals, before also pitching in the playoffs. That promotion to the full-season team proved to be significant when Roberts was suspended.

If he had still been on the short-season roster, the 50-game suspension basically would have kept him from pitching all of this season. Instead the suspension will begin with Palm Beach’s first game on April 4 and barring rainouts he will be eligible to pitch on May 28.

Until then, Roberts is allowed to work out during spring training and then will be assigned to the extended spring training program until he is eligible to be activated.

That already is a moment and game Roberts is looking forward to, a couple of weeks before his 23rd birthday.

He already has given himself a great gift, the ability to recognize his mistake, his willingness to be accountable for it and his desire to atone for his poor decision and move on with his career as soon as possible.

“I was being stupid,” Roberts said, “There’s no other excuse or anything to explain, it was just me being stupid and being a little kid.”

Roberts was back living near the Wake Forest campus and was grocery shopping at a Publix in November when his cell phone rang. As soon as he saw who was calling, he knew why.

Gary LaRocque, the Cardinals’ director of player development, and Tony Ferreira, his assistant, made official what Roberts knew would happen as soon as he took the drug test.

“We’re not stupid, we know when we mess up,” Roberts said. “It wasn’t like I got caught off guard. I knew it was coming.”

Roberts also knew the suspension would soon become public, so he had to make phone calls of his own, to his mom and dad, his other relatives and those close to him. He didn’t want them getting the news off Twitter or other forms of social media; he wanted them to hear what had happened directly from him.

“Calling my mom and dad definitely was one of the hardest things I’ve ever had to do,” Roberts said. “The last thing anybody wants to do is disappoint their loved ones, the people who support you. My mom and dad weren’t mad at me, just disappointed. ‘You’re better than that.’ 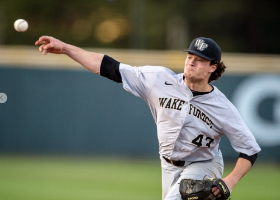 “I’m a baseball player and I take that to heart, with pride. When I start to do things off the field or on the field that start to hinder what I know I can do it’s time to step back and take accountability for the mistakes that you made.

“You have to look to the future and know that if you are doing something that is inhibiting your career, what it is you want to do, you need to make a change. That’s what I’ve done. It’s been a little bit of a lifestyle change, kind of growing up a little bit. You have to realize the choices you make off the field can affect what you do on the field. It’s been a learning experience, a growing up experience.”

Reyes has been there

Someone who can relate to what Roberts is experiencing is Cardinals’ pitcher Alex Reyes. Three years ago he was exactly where Roberts is now, hoping to get through the suspension as best as he could and counting down the days until he could pitch in an actual game again.

He got through it with the help and love of his family and friends, the same type of support group that surrounds Roberts.

“It was definitely harder from the mental side,” Reyes said. “You have to deal with family and just random people talking to your family. I had family members calling my parents asking them, ‘What’s he thinking? Is your son crazy?’ I honestly think that was the hardest part about it.

“My parents understood I made a mistake and accepted it. You can’t run away from it. You have to face it, put it in the past, then look forward.”

That’s the advice Reyes can share with Roberts about getting through the next couple of months.

“Unfortunately, he (Roberts) made a mistake and he’s going to pay for it. It’s no one else’s fault besides his, but it’s our responsibility to bounce back and be accountable. You’ve got to be responsible in this game and focus on things that are far more important.

“You don’t want to be in this situation but at the end of the day you put yourself there. Once you get back on the field you can put it behind you.” 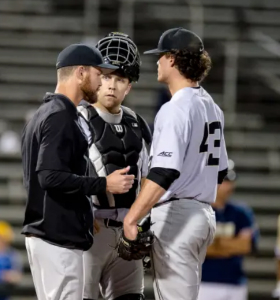 One of Roberts’ go-to confidants for the last several years has been Matt Hobbs, his pitching coach for all three of his years at Wake Forest who left the school in November to become the pitching coach at Arkansas.

“He’s always been a guy I can turn to for help and be honest with him and he always gives me honest feedback in return, and that goes a long way with me,” Roberts said.

That has been true in their discussions about the suspension as well.

“Obviously the kid make a mistake and it is what it is at this point,” Hobbs said. “He’s got to own it and use it to make better decisions in the future. I always say to anybody it’s only a bad thing if you don’t learn from it. From my conversations with Griffin I think he’s taken ownership of it, he understands what he did was wrong and he’s moved past it.

“He’s embarrassed, he’s sorry. He’s been really contrite with me. … If he can go out and do his job as a baseball player and make really good decisions people will forgive.”

Hobbs said in one way this situation reminds him of where Roberts was coming into his junior year at Wake Forest last season.

“I think a lot of people had pegged him as a bullpen guy and it made him angry and pissed him off a little bit,” Hobbs said. “He came back wanting to prove to everybody that he could be a starter. It’s not the same because one is off the field and one is on the field but it’s the same type of mentality he has and it’s why he’s really good.

“He doesn’t let anybody tell him what he’s supposed to be. Moving on from something like this, he’s not going to let people tell him he’s some kind of degenerate because he made a bad decision.”

The incident has not changed Hobbs’ opinion that Roberts is headed for a long major-league career, with the only question in his mind whether Roberts will be a starter or a reliever, the role likely determining how quickly Roberts is ready to pitch at that level. In Hobbs’ opinion, Roberts has the best breaking pitch he’s ever seen; in part because of his innate ability to throw it for strikes, but also because of his mental understanding of all of the elements to the pitch.

“As a coach you like a guy who doesn’t care and all he wants to do is go out and just shove,” Hobbs said. “But you also like guys that do care and understand why their pitches move a certain way. He’s got both of those things. We’d be back in the bullpen at Wake and he would be throwing changeups on our Rapsodo machine and he would turn around and ask me how much horizontal break the pitch had. There’s not a whole lot of guys who care about that, and he does. The way baseball is trending and moving he’s kind of the perfect hybrid for that for this new age of baseball.”

That’s just one of the reasons why Hobbs remains such a strong believer in Roberts and his ability and why he is eager to see the results when Roberts is back pitching in games that count.

“There’s blessings in disguise sometimes in these things and for Griffin the blessing is he’s got more time to develop his craft,” Hobbs said. “He’s going to be salivating to get back on the mound, if I know Griffin. It’s tough for him to not pitch.”

That’s why Roberts is determined not to let anything like this happen again in the future, preventing him from pitching again. 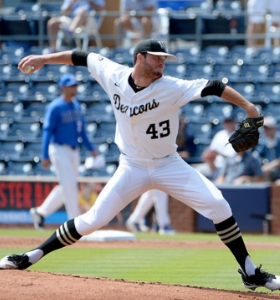 “For me it’s all about learning from the mistake and taking the time that I have to give, the 50-game suspension, and doing my best with that time to be ready to go when I am allowed to throw,” Roberts said. “That’s what I intend on doing.

“This is a game of kind of forgiving and forgetting so I need to forgive myself and forget about it and move on. If I continue to think about it, it’s going to haunt me and affect my performance. … For me it’s time to live up to the expectations and show them (the Cardinals) who I am on the field and give them an opportunity to figure out who I am off the field.