Every year for the past five years A.J. Choc has been coming down to the Cardinals Spring Training with his mom Jackie and sister Melanie, but this year will be extra special.  After they go to a few Cardinals games and his family leaves Choc will be staying as an umpire with the Cardinals minor league Spring Training home games. When the regular season starts he will be in the Midwest League– the league where the Cardinals Class A team, the Peoria Chiefs play.

Choc got the opportunity to tour the back fields where the minor league players were working out on Thursday. He even met Gary LaRocque, the Cardinals Director of Player Development.

To be umping games with the birds on the bat is a dream come true for him and just like the players who have hopes of making it to the big leagues, so does Choc.

“He has always loved baseball,” said his mother Jackie Choc who is a big baseball fan herself. “I remember when he was in third grade he wanted to watch the Cardinals game but it wasn’t on TV. Later I went in his room and there he was with the radio on listening to Jack Buck.”

Choc started umpiring youth league games at Affton Athletic Association in St. Louis in 2007 when he was 15.

“We had to get him a work permit,” remembered his mother.

He played on the Lindbergh High School varsity baseball team in 2009 as an outfielder.

“I didn’t have much power, much of an arm, or the best speed, but I was always a smart player,” said Choc who played outfield at Lindbergh.  “I was being used as a utility player my senior year. I did the little things right and had a high ‘baseball IQ.’  I’ve been able to transfer that quality into umpiring since a lot of umpiring has to do with instincts of where to be on the field at the right moment.”

After he graduated from high school, he continued umping, working high school baseball in the St. Louis area, while attending St. Louis University. He received a bachelor’s degree in Sports Business in 2013, but could not see himself working in an office.  The love of being out on the baseball diamond was still with him, gnawing at him and though he knew he was not going to be a player he started exploring his options.

“I knew that there was not going to be a playing career in my future, he said.  “Since I had continued umping during college and mentors in the youth leagues were telling me I was doing well, I decided to learn more about umpiring schools in Florida.”

He decided on the Minor League Umpire Training Academy in Vero Beach. 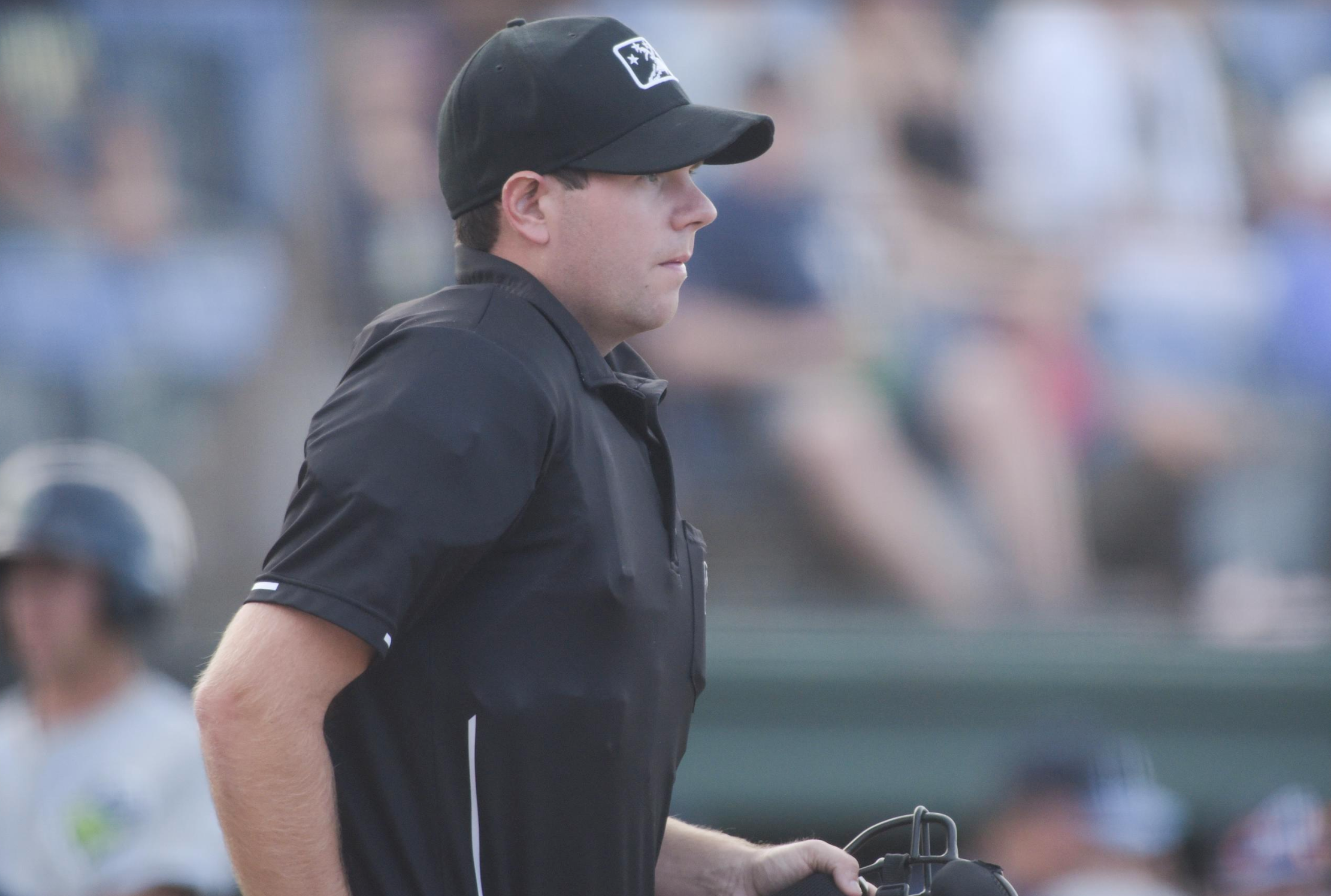 “In 2015, I moved to Florida to umpire all year around for high school and high school/youth travel leagues. After going to umpire school in 2016, I worked college baseball in Florida and worked in the American Association which is an independent league.”

There is a lot of travel in being a minor league umpire and his mom and sister supported him by going to some of the towns he was playing in.

In 2017 A.J. got the idea to go back to Vero Beach to the Minor League Umpire Training Academy again in hopes of getting noticed. That decision turned out to be a good one.

“At that point they hired me into the minor leagues,” he said. “I worked the Coastal Plain League 2016, Arizona League 2017, and then Northwest League this past season.” 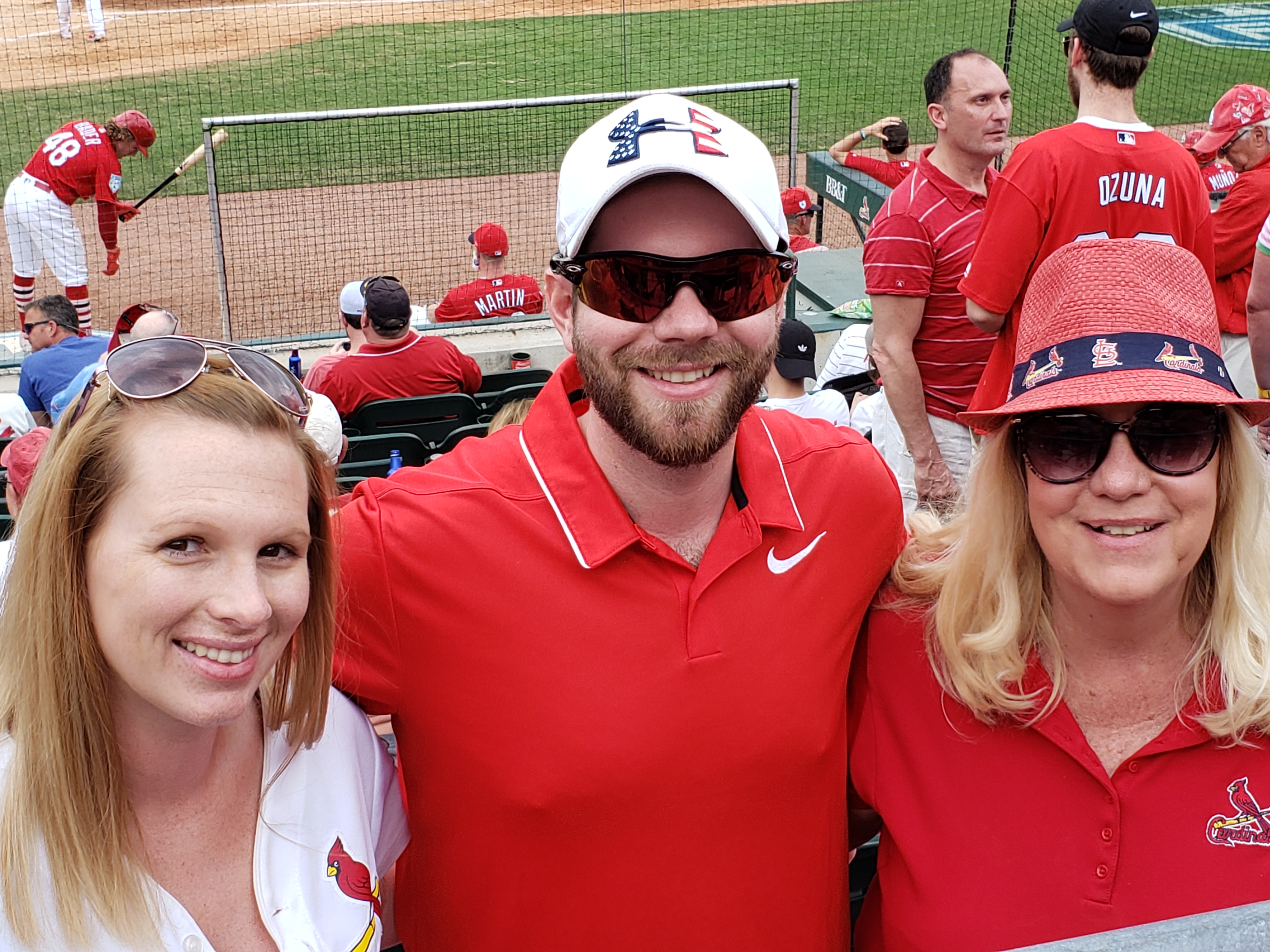 Melanie, A.J. and Jackie Choc at a Cardinals game at Spring Training

“I am his biggest fan of course,” said Jackie Choc. “One time when he was in the Coastal Plain League, we had scheduled a trip to see him at the Outer Banks in North Carolina, but he was moved to the Arizona League and his plans got changed. He called and said, ‘You can’t meet me in North Carolina… because I will be in Phoenix!’ We immediately started changing our plans.”

She cancelled the flight and began trying to figure out how to get out to see him in Arizona. They had to be there in three days.

“My mom asked me if I wanted to drive out to Phoenix with her,” remembers Melanie, who took time off from her job as a nurse to come to Spring Training this year. “I said, ‘no Mom we can’t drive to Phoenix, we’re flying’ and we booked our flight.”

A.J. Choc’s girlfriend Ellen also tries to go to some of his games. They started dating in October of 2017 right around the time he finished his first season in the minor leagues ( the Arizona league.)

“She is always sad when I have to leave for my season, but she is really proud of me and loves to watch me succeed,” he said. “Last year, she flew to Seattle to come watch me work in Everett just up the road at the Mariner’s affiliate. We had a great time touring Seattle.”

As he gets ready to start umpiring the minor league games for the team he grew up watching, he knows he made the right choice going into umpiring.

And this year will be easier on Ellen because she will get to see him more.

“She is excited that I will be in the Midwest league because it’s closer to home,” he said.

His mom and sister are also excited that they can easily drive the three hours to Peoria to watch him ump. 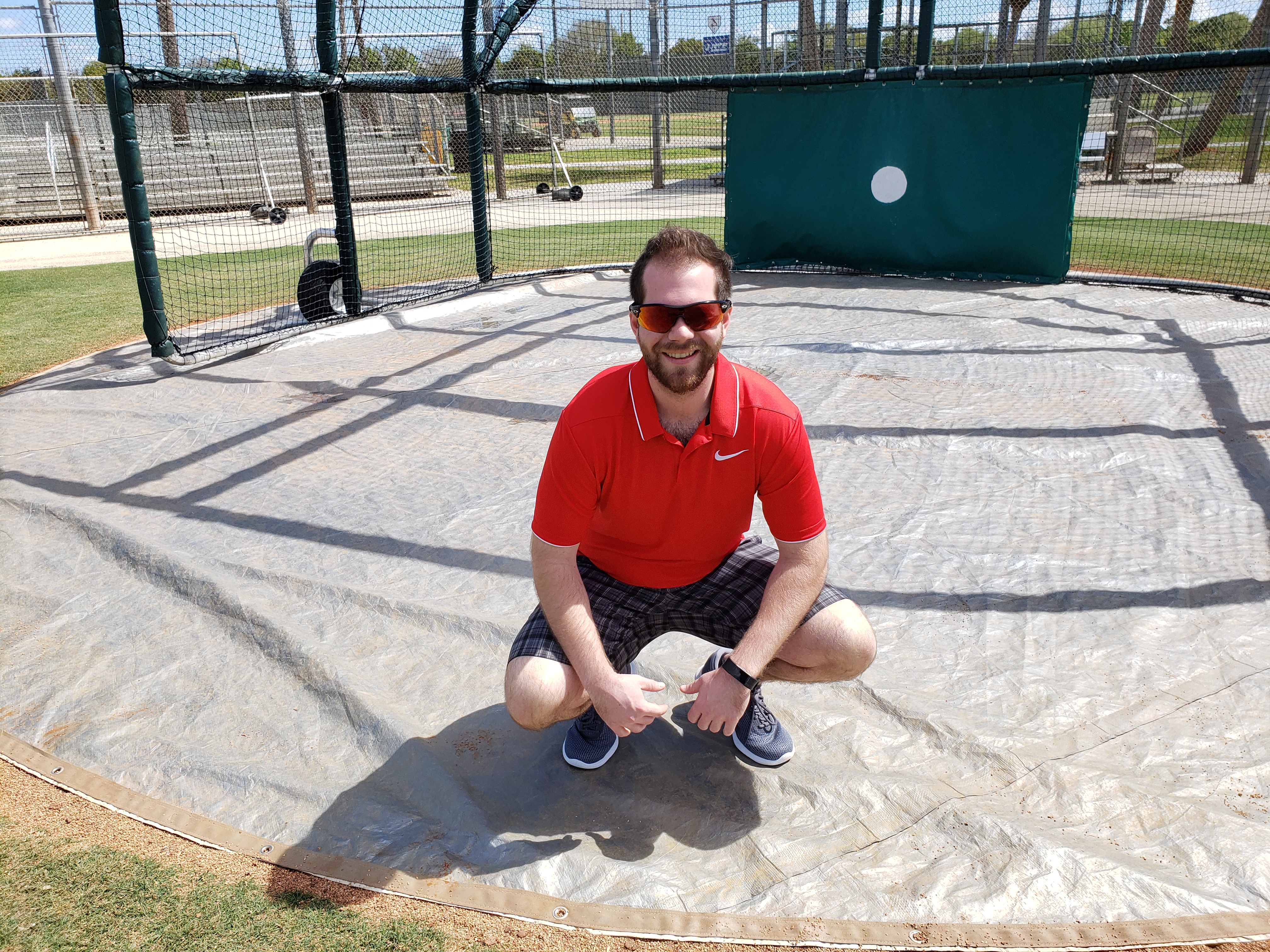 This past week while Choc was getting acclimated to the Roger Dean Chevrolet complex fields– where he will be umping this week– he accommodated when someone asked him to crouch down at the spot where home plate will be. His first game for the Cardinals organization will be this Friday.

“I knew I wanted to be involved in baseball in some way or another,” said Choc, “And when I discovered my road through umpiring, I made it my passion.”