Daniel Ponce de Leon was the special guest at the eighth annual STLSportsPage.com Baseball Bash sponsored by the Homewood Suites and hosted by Rob Rains. The event raises money for two charities while bringing Cardinals fans together for a fun evening. 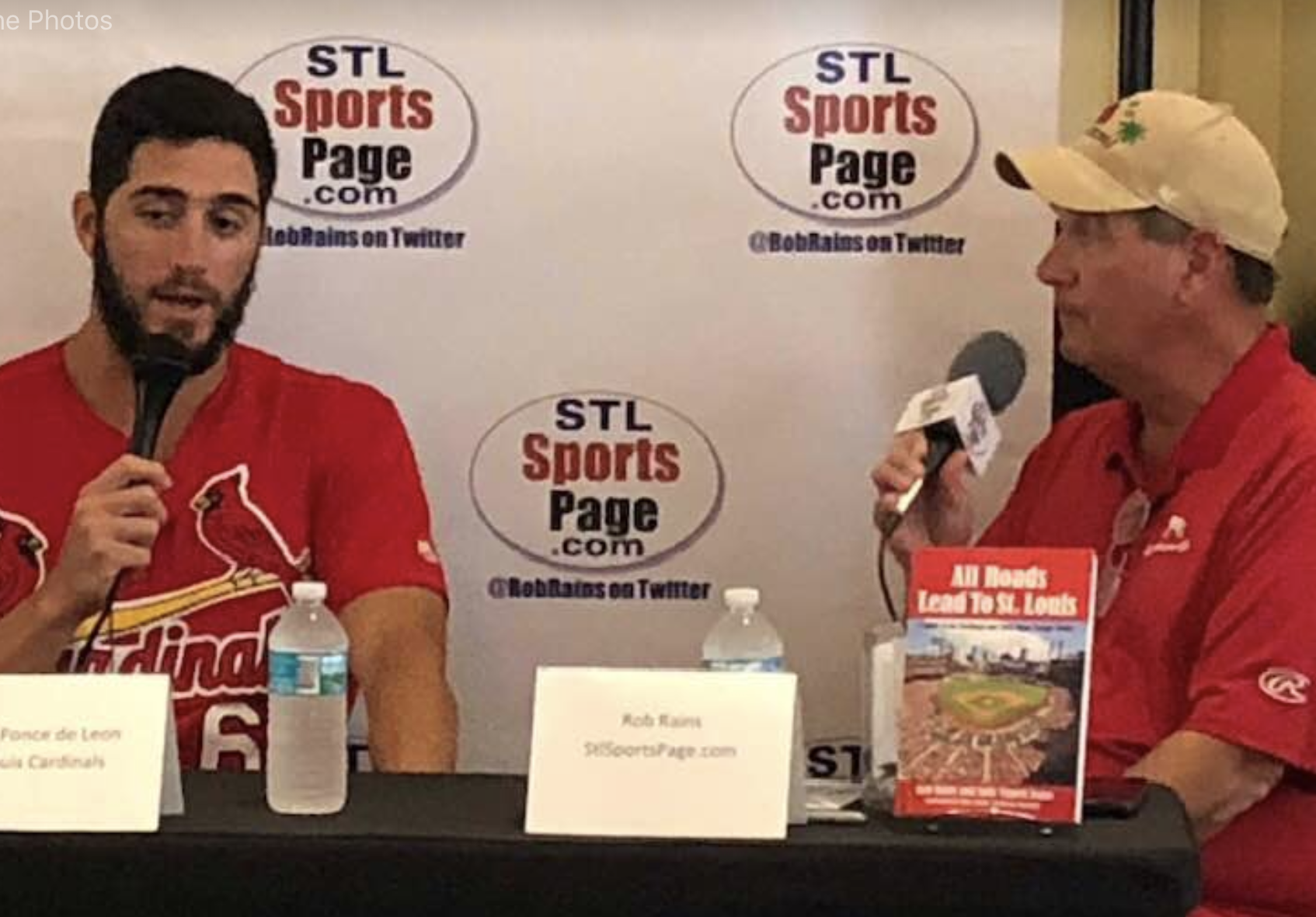 Video Part 2 Mike Trim from WPTV, West Palm Beach went out into the audience and the fans asked questions. There was a funny part in this clip about animal noises. 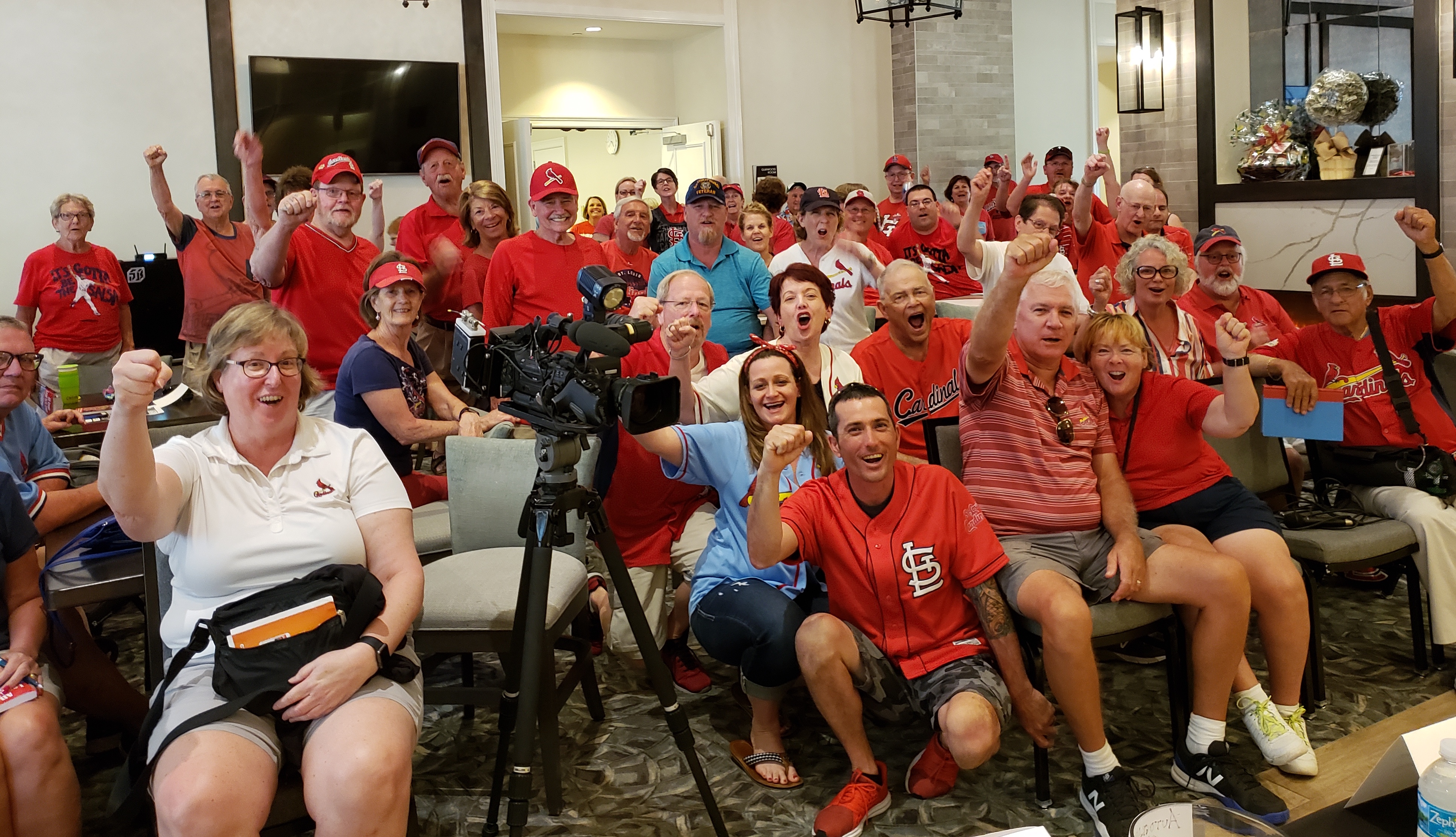 Group shot of those up the middle.

After the baseball panel and questions the fans were treated to barbecue hamburgers and hot dogs, on an outdoor patio, courtesy of the Homewood Suites. 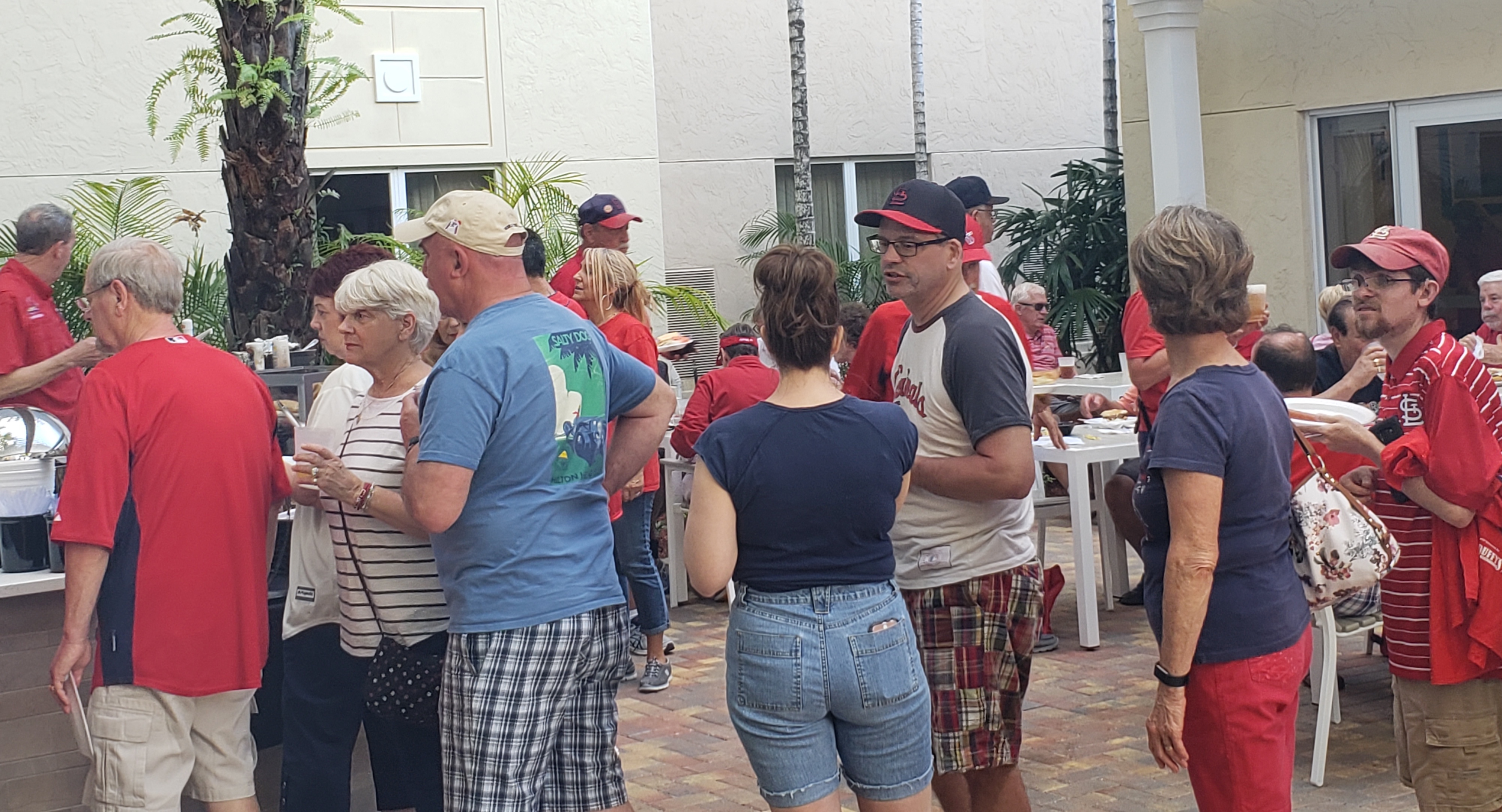 Fans at the party were from Texas, Illinois, New Jersey, Florida, and of course Missouri. There was a silent auction and raffle benefitting Rainbows for Kids of St. Louis and the Leukemia & Lymphoma Society of Palm Beach. 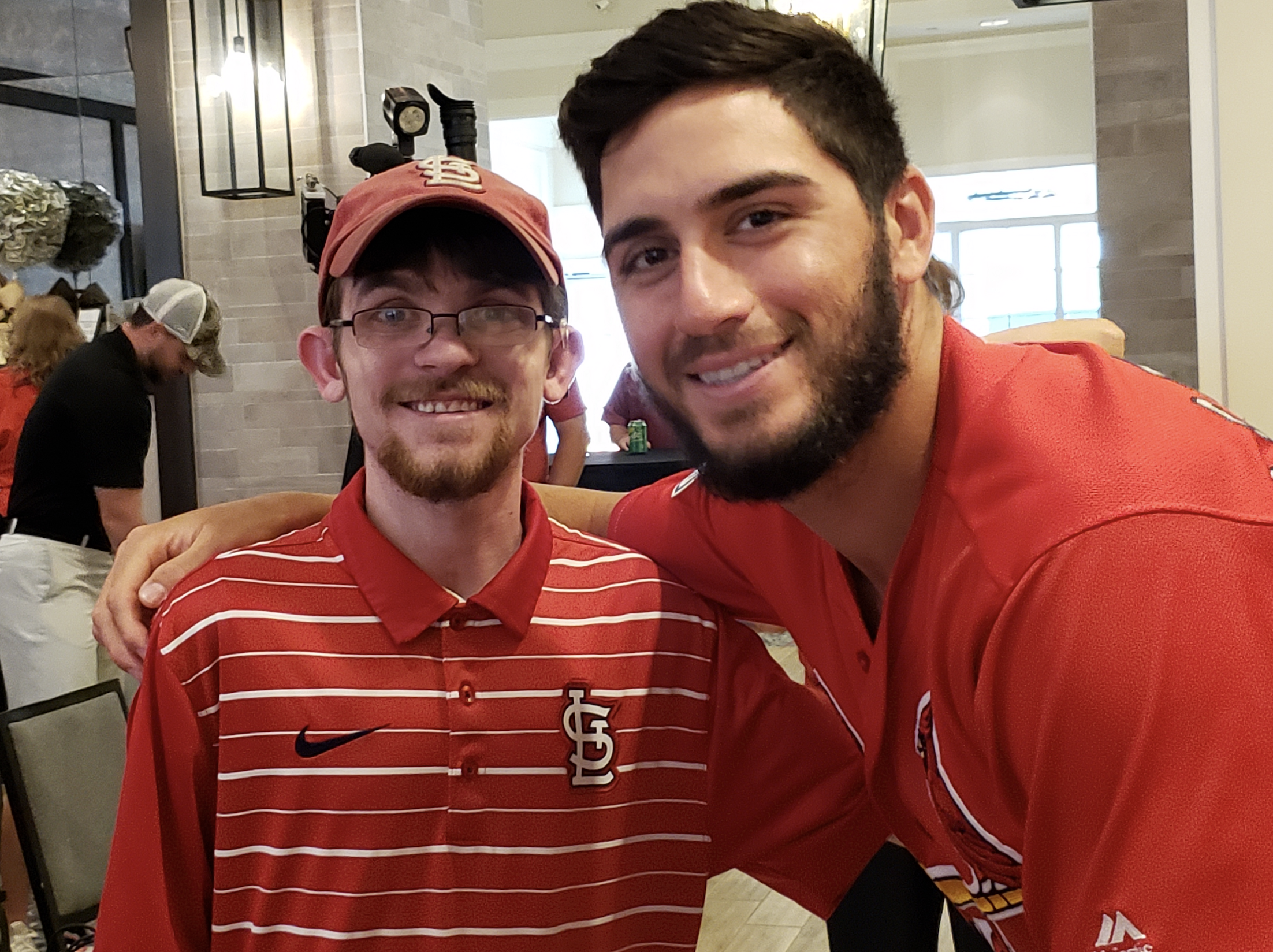 Tyler Hammond, shown in the photo with Ponce  de Leon had been one of the children served by Rainbows for Kids. When he was young he had a multiple organ transplant. He was waiting on his organs during the Rainbows for Kids baseball season and he wanted to play so bad the hospital in Indianapolis where he had to have the complicated surgery gave him a beeper and he was able to return home to participate in the baseball practices. 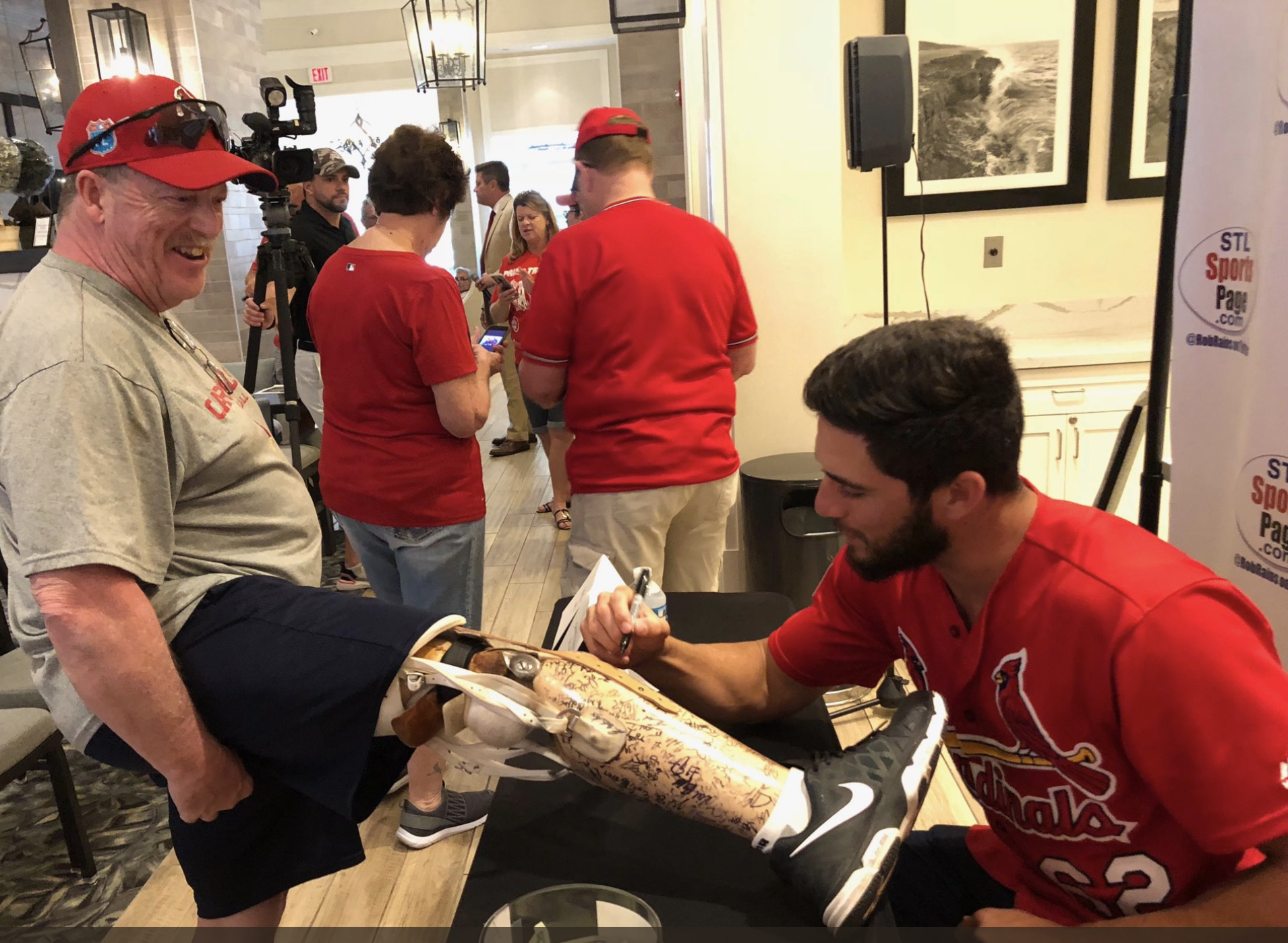 Brian Garner of Imperial, Mo. gave Ponce de Leon a big surprise when he warned the baseball player to “move back” and hoisted his prosthetic leg up onto the table to get an autograph. Garner has volunteered as a coach for the Rainbows for Kids baseball team in St. Louis.

The Rainbows for Kids baseball team is for children– boys and girls– of all ages and skill levels. Tyler was very weak at the time but he was able to participate in the All-Star Game before his beeper went off and he was able to have the surgery. Tyler and his parents Debbie and Ross Hammond now volunteer for Rainbows for Kids and helped at the party. 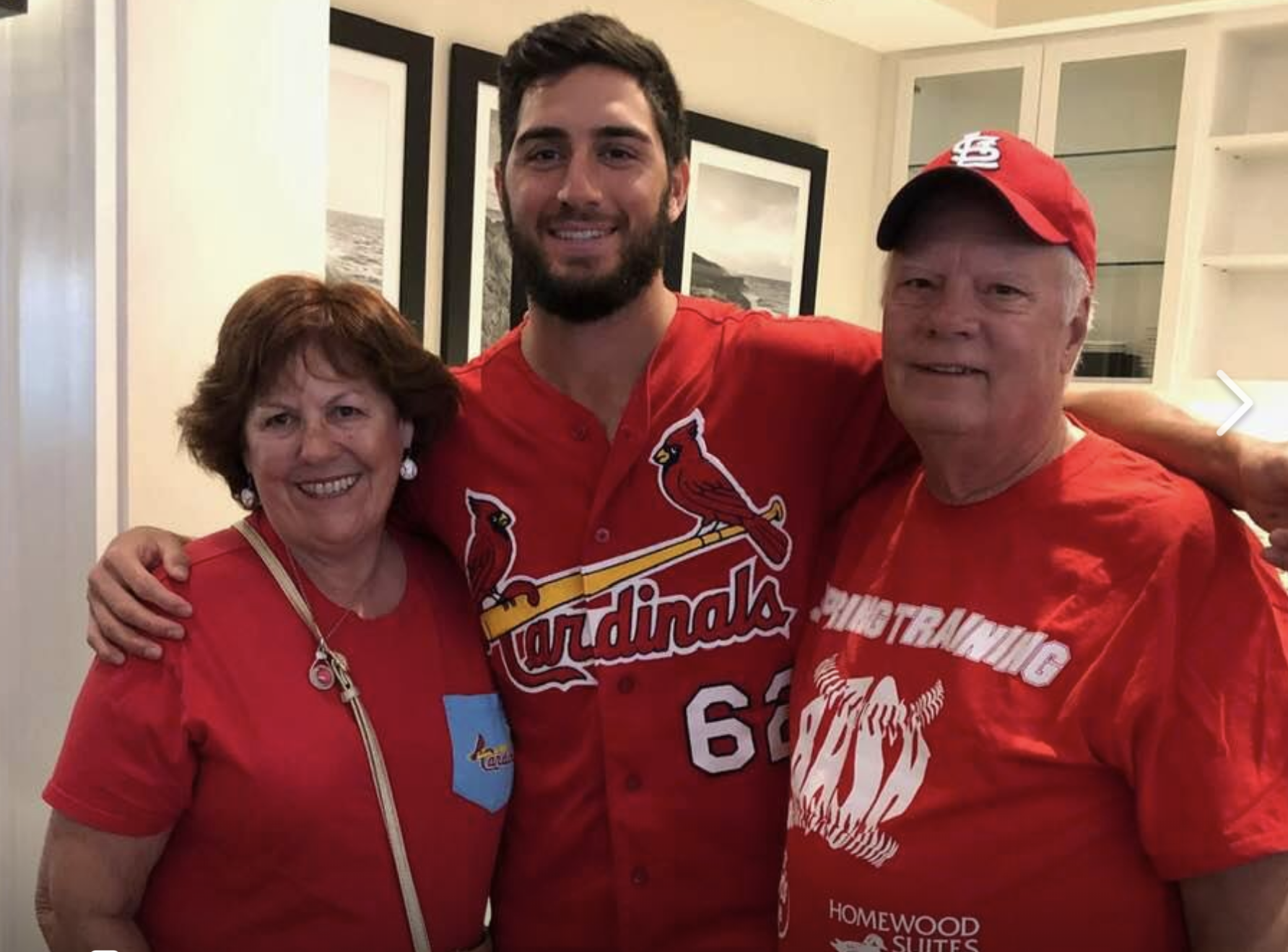 Jeri and Mike Neumann shown in photo, above are more volunteers from St. Louis and the Villages in Florida who helped with the event.

To find out about next year’s event be sure you are a subscriber to the STLSportsPage.com newsletter by Rob Rains: CLICK HERE

The Roster is out and so is the lineup. Rob Rains goes over the roster and why he thinks they chose who they did as well as the starting line up and a preview for […]

The Cardinals introduced new first baseman Paul Goldschmidt to the St. Louis media during a news conference on Friday at Busch Stadium. […]

SUNDAY: 12:30 John Rooney interviews Mike Shildt on the Main Stage followed by  1 p.m.  Q&A with Cards GM Mike Girsch The Hot Stove League is in full force with the Winter-Warm Up and the Baseball […]