Seth Maness did not start out playing baseball wanting to be a Guinea pig.

Yet, for the second time in his career, the former Cardinals reliever is about to enter the lab as one of the subjects doing just that.

The lab is this case is the independent Atlantic League. Maness has signed on to pitch for the High Point, N.C., Rockers this season, a new team in the league which went through its first pre-season workout on Tuesday and will begin the season later this month.

Through an affiliation with major league baseball, the Atlantic League is becoming a testing ground for many of the rules executives are thinking about implementing in the coming years.

“Maybe this falls right in line with me being the experimental man,” Maness said in a telephone interview.

Maness’s first experience with becoming a trailblazer occurred three years ago when he underwent surgery for an elbow injury which traditionally would have required a ligament transfer known as the “Tommy John” procedure.

The procedure, now only partly in jest known as the “Seth Maness surgery” did not involve transferring a ligament into his right elbow as is the case with the Tommy John surgery, an operation that usually keeps pitchers sidelined for close to 18 months.

This new procedure involves reattaching and reinforcing the torn ligament in the elbow, which significantly reduces the recovery time. Maness had the surgery, perfomed by the Cardinals’ team doctor, Dr. George Paletta, in August of 2016. He was back pitching in a Triple A game on May 1 – nine months after the surgery.

Maness made that appearance for the Royals’ top farm team and made eight major-league appearances in 2017. He finished the year back in Triple A and was released a month into last season, but the reason had nothing to do with the health of his elbow, Maness said.

“I can’t blame that (the surgery) at all,” Maness said. “It was more just me not executing my pitches. I was very pleased with the surgery. My elbow felt great and worked great and I was able to stay healthy.”

For whatever reason, Maness did not find any teams wanting to sign him last summer after he was released by the Royals, which led him to sign with the High Point team, located about a 75-minute drive from where he grew up and about three hours away from his current home in Wilmington, N.C.

“I just kept my head down and kept working and decided this was going to be the best route,” Maness said. “I’m ready to go and see what happens. … My biggest thing, and the whole reason for playing, is to try to get picked back up by an affiliated team. Hopefully I am going to do everything in my ability to get another shot.

“I want to know that at the end of the day I did everything within my power and if it doesn’t work out then, hey, there are plenty of other things out there.”

When the 30-year-old Maness signed with the Rockers the agreement between MLB and the Atlantic League to field-test some of the proposed new rules had not been completed.

“I still wanted to play and had the drive to compete again and try to prove myself again,” he said.

Maness said he probably would still have signed to pitch in the league even with the knowledge of the rules changes, but he is taking a wait-and-see attitude about how the new rules impact the game.

“I’m kind of old school when it comes to changing the game,” he said. “I like how it was played for years. I’m not sure about all of these changes.”

The two biggest proposed rules changes affecting Maness and the rest of the pitchers in the Atlantic League will be the implementation of robotic-assistance for umpires in calling balls and strikes. That is supposed to be phased in during the course of the season.

“I heard the umpire might wear an ear piece and get a beep if it’s a strike but I think he still has final judgment,” Maness said.

The second rule change will keep teams from shifting, requiring that two infielders be on each side of second base when a pitch is thrown.

Maness did not have much experience with shifts during his major-league career, as they were just beginning to come into vogue at the time and were not as prevalent as they are now.

“From a pitching standpoint you really only remember it when it doesn’t work,” Maness said. “You kind of expect to turn around and when somebody’s not there you wonder what’s going on. When it does work you are like, ‘OK, that’s what’s supposed to happen.’

“I wasn’t studying every time I turned around where somebody was playing and trying to adjust where I was going to throw the pitch. It’s all about executing the pitch and trying to get the best results.”

As it turns out, the rule proposal that Maness was the most worried about, and the most controversial, has been delayed until at least next season – moving the pitching mound back two feet to 62 feet, 6 inches. The original plan was for that to go into effect the second half of this season.

“That’s great news,” Maness said about last week’s announcement. “I’m not sure I was ready for that.

“If they move the feet back two feet why would a scout watch me throw from 62 feet and want to sign me when that’s not what’s going to happen if I go back to affiliated ball? I really can’t see MLB agreeing to that.”

Among the other rules changes will be eliminating mound visits during an inning except to make a pitching change or because of an injury; increasing the size of the bases from 15 inches to 18 inches; requiring pitchers to face a minimum of three hitters unless he reaches the end of an inning, and shortening the time between innings by 20 seconds, to 1 minute, 45 seconds.

“They say it’s all about speeding up the game,” Maness said, “It’s going to be a trial and error. They are going to try it and see what happens and go from there.”

A couple of things Maness does know for sure that will happen this season is that he is going to be a starter for the Rockers instead of a reliever and one of his teammates, also a starting pitcher, will be his old college roommate at East Carolina. 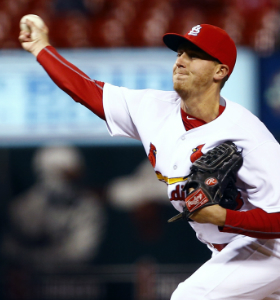 “I really missed starting,” Maness said. “The first time I really relieved was when I got to St. Louis; I had always been a starter before. I like having the set schedule of knowing when I am going to be out there and feeling like you really have the game in your hands and being in control.”

Having his former roommate, Seth Simmons, on the team also is something Maness knows will make this a fun season.

“We were together from 2008 to 2011 but we never played against each other in the minors,” Maness said. “He got to Triple A with the Diamondbacks and Padres but we were always in different leagues. We always shot text messages back and forth and kept up with each other and it’s kind of cool that we will be back together.”

Maness is one of several former major-league pitchers on the rosters of the eight teams in the league, including two St. Louis-area products, Tim Melville and Ross Detwiler. Also scheduled to play in the league this year is former Cardinals’ catcher Cody Stanley, for the team in Sugar Land, Texas.

“It’s possibly a last run for me. I’m just going to give them hell.”