As Dylan Carlson has steadily become one of the top prospects in the Cardinals’ farm system, he has had the support of a lot of people – even someone which at first glance might seem a bit surprising.

Somebody on the New York Mets is willing to help a Cardinals’ prospect?

The answer is yes.

J.D. Davis is the Mets’ player who has become a mentor and role model to Carlson, and it’s a relationship that began more than a decade ago when the two were young boys growing up in Elk Grove, Calif.

Carlson first met Davis when he was about 9 years old and became teammates in travel baseball with Davis’ younger brother, Ben, who is the same age as Carlson. J.D. Davis, five years older, was just about to begin high school where Carlson’s father, Jeff, was the baseball coach.

“It was like J.D. was always around all the time,” Carlson said. “I saw him go through high school and saw the way he handled it. It allowed me to follow in his footsteps. I could lean on him for advice, and he has really been a good role model.

“To me he’s always been like a big brother. His whole family always have been people I could count on my whole life. The relationship with him and his whole family is something I’m extremely grateful for.”

Carlson and Ben Davis were teammates, not only in baseball but in football and other sports, as they went through middle school and high school, meaning the two shared a lot of time together. And when Carlson wasn’t playing a game himself, he was always around his father’s teams when J.D. Davis was becoming one of the team’s stars.

“I was at the field ever since I could walk,” Carlson said. “That’s something you see in my game. I am eager to be out here all the time and you never see me get enough.”

Some of the lessons which Carlson is putting to use now as an outfielder on the Double A Springfield Cardinals are ones which he learned from watching Davis, but more of what he tries to put into action are the life lessons and instructions Davis has shared over the years.

“The guidance he has provided growing up and through my career, seeing what he went through before me, his attitude, the way he goes about things,” Carlson said of what those lessons have included. “He’s always serious, but never too serious if that makes sense. One thing I have always noticed about J.D. is how even keel he is. Nothing ever seems too big for him. He’s always appreciative of everything you do for him. It’s really awesome to be around somebody like that.

“He’s so willing to reach out and help out any way he can. It makes it easy for me to have those types of people in my life.” 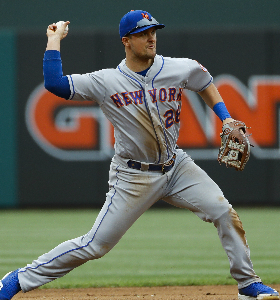 Davis, 26, is off to a good start this season for the Mets. After graduating from Elk Grove, Davis went to Cal State-Fullerton and was drafted by the Astros in the third round in 2014. He was traded to the Mets in January.

Carlson was drafted out of high school in the first round in 2016 and signed with the Cardinals, turning down a chance to follow Davis to Cal State-Fullerton. Now the 20-year-old Carlson is one of the youngest players in the Texas League, and Davis is not surprised by Carlson’s success and is extremely optimistic about his future.

“Growing up you could see the power he had even as a switch-hitter,” Davis said. “He has a good glove and arm, and he runs pretty well. He’s got great character and I am pretty proud of him.

“He was always hanging around the ballpark and he was always around older guys. Because he was thrown into the fire and exposed to higher competition, his IQ is greater than his age. It’s really unbelievable. He can play any outfield spot and I think can be a 20-20 guy (home runs and stolen bases) or perhaps a 30-30 guy someday if he sets his mind to it.”

When Davis was in the Astros’ system he and Carlson had dinner together almost every other night during spring training because the two teams trained just 15 minutes apart. They didn’t get together as often this past spring because the Mets train in Port St. Lucie, about 45 minutes from Jupiter, but they still got together a couple of times a week. There were frequent text messages exchanged as well.

Jeff Carlson is happy that his son has somebody such as Davis to turn to for advice and to follow as an example. Ben Davis also is still close to Dylan, but his sport of choice these days is football. He has grown to 6-foot-4 and 280 pounds and is an offensive lineman for the University of Minnesota .

“He (J.D.) and Dylan are very much alike,” Jeff Carlson said. “They were not the ones in high school to go out and find the social scene. They were very focused and dedicated to the sports they played. They had a lot of friends, but they knew what they wanted to do.

“I think it’s huge that Dylan has somebody like J.D. who is ahead of him that has experienced things before he experienced them. He kind of helps with questions and stuff he (Dylan) is going through. When you are struggling a little bit during the season J.D.’s the kind of guy you can call and say, ‘Hey, what did you do in this situation?’ or, ‘How did you change your routine?’ I’m grateful Dylan does have those guys he can kind of lean on.”

Davis said he enjoys playing the mentor role because he remembers what it was like when he was going through high school and looked to the older players for advice.

“I was always a guy who asked questions to the older guys,” Davis said. “Now it’s kind of coming to me. I don’t mind it. I always like trying to be the role model or somebody that the guys can come to with questions.”

Both Davis and Carlson still live in the Elk Grove area, near Sacramento, and are part of a group of former Elk Grove players who regularly work out and train together in the off-season.

It might only be a couple of years before not only Davis and Carlson are major-leaguers but several other players from the recent era of Elk Grove baseball could be as well.

One former player, Rowdy Tellez, already is in the majors with Toronto. Derek Hill, a former first-round pick, is rising through the Tigers farm system. Dom Nunez is a prospect in the Rockies system, recently hitting three home runs in a game in Triple A. Nick Madrigal is another former first-round pick, after going to Oregon State, and is among the White Sox’s best prospects.

All six of those players went to Elk Grove and played for coach Carlson between 2011 and 2016.

“We were truly blessed to have some awesome and talented kids,” said Jeff Carlson, who has retired as the baseball coach but still works at the high school as the football defensive coordinator and as a physical education teacher. “We had a good culture here for a long time.”

Dylan Carlson believes he benefited from being around all of those players.

“We had a very talented squad coming through there around that time and it’s great to see everyone doing so well and making the most of their opportunities,” he said. “We always wanted to be the best versions of ourselves, and that was something that was really great. I wouldn’t say I was ever the best player until maybe my senior year, but that was great too. We all had to learn to play the game and be the best you could be. That was something that was great for me.

“I stay in touch with all of those guys but mine and J.D.’s relationship is a little different. … We have every sort of conversation you can think of.” 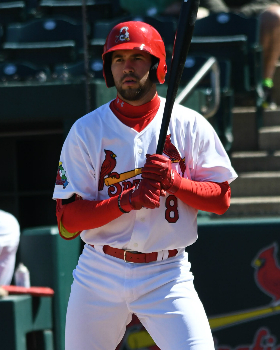 Even though Carlson and J.D. Davis never played on the same baseball field together – and have only faced each other in spring training games – they have been together for almost every other kind of sporting competition imaginable.

“Everything with them (J.D. and Ben Davis) is competitive,” Carlson said, “whether it’s video games, ping pong, Wiffleball, pool basketball … anything we can do to be competitive we’re going to do it.”

Carlson and Davis stay in constant communication, and one recent text exchange developed after Davis, in the interview for this story, said that he dunked on Carlson one time in a pool basketball game.

“Dylan was always the one talking smack,” Davis said, “and I told him one time I was going to dunk on him. I did it, and it was pretty funny. I won’t ever let go of that moment.”

“None of us remember that,” Carlson said. “If you ask me and Ben, things went down a lot different. It was usually the other way around but if J.D. wants to sound cool for the story, we might have to let him.”

How You Can Help Adam Wainwright Help Puerto Rico Relief: Stop By the Big League Impact Booth at Winter Warm-Up

Adam Wainwright is scheduled to appear at the Winter Warm-Up on Monday but he will have a big presence at the three-day event as his charity, Big League Impact will have a booth and be […]

Center fielder Harrison Bader discusses his approach to spring training, his work with Jim Edmonds and more in this edition of the Cardinals podccast. […]