Betsy Hillyard and her husband Kenny met their bucket list suggestion and have been to every MLB ballpark. Now they have embarked on another quest.

“My husband and I are huge Cardinal fans” said Betsy Hillyard. “We completed our goal of seeing a game in all the current MLB parks in 2017, so now our goal is to see some type of a baseball game (minor league, college, etc) in all 50 states.”

In 2013 they realized they were pretty close to having been to all of the parks so they made a plan to finish it off. The two have been married 21 years and a large part of their life is centered around their love for baseball.

“We both work full time so we took a summer vacation each year and divided the country into sections,” she said. 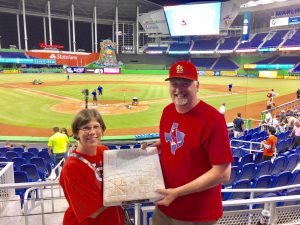 So they sat down and looked at a map of the country.

“In 2014 was all the California parks, 2015 was the Midwest, 2016 was the northeast and then in 2017 we visited Atlanta, Tampa Bay and then finished up seeing the Cardinals play the Marlins. ‘To celebrate, we purchased first base that had been used in the first 3 innings of the (Cards-Marlins) game,” she said.

Now that’s combining geography skills with careful planning. Luckily they like history and they realized that seeing baseball games is a great way to see the country.  Since most games are at night, they would travel during the daytime and they took time to sightsee, etc. 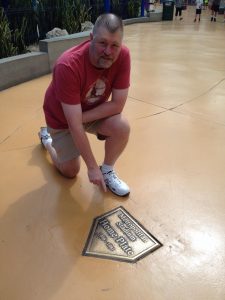 “One of our favorite things to do is to seek out markers, plaques etc from old ballparks that are no longer standing.  We love the book “Roadside Baseball.” It’s a great state by state listing.”

They ended up doing it. They went to every current ballpark.

They put a lot of miles on rental cars, and included a few doubleheaders– day game in one park, night game in another.
“After we finished the MLB parks, we decided our next ‘project’ would be to see some sort of baseball in all 50 states.”
It might take them a while, but they will have fun doing it. When trying to find a ballgame in every state one would think Alaska might be a challenge. You might wonder about seeing a game in Alaska– well now they can say, “been there, done that.”
Once you hear about it you might want to put it on your bucket list. 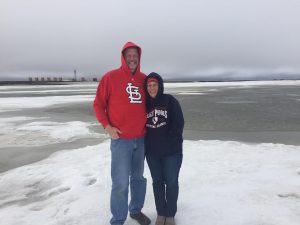 “Alaska was a true adventure – we spent 10 days there,” she said.  “If you ever have the chance, you should check out the Midnight Sun game in Fairbanks Alaska played every year on the evening of the summer solstice” she said. “At that time there is nearly 24 hours of daylight. It begins at 10pm and has never used any sort of lighting.  I believe next year will be the 115th year the game has been played.”

The photo, left shows them standing on the frozen Arctic Ocean in late June in their Cardinals gear.

The home team is the Alaska Goldpanners, a collegiate summer league. Many locals attend but according to Betsy, there were also a lot of pure baseball fans who had traveled from all over for the game.

“Since it’s held during the summer solstice there are a lot of other fun events going on in Fairbanks at that time,” she said. “The Midnight Sun  Game was our Alaska game in our current quest. Right now, we’re at 23 states.”

The Hillyards live in Texas so the next new MLB park that they will  is the Rangers new park, which is about 30 miles from them.
“Not much of an adventure there but it sure will be more comfortable in late summer!” she said.
Their life is a baseball adventure. It’s like the famous quote from Terrance Mann in Field of Dreams: “The one constant through all the years… has been baseball… Baseball has marked the time. This game; it’s a part of our past.” — and it evidently will be part of their future too.

Audio by Mike Reeves To hear Mike Shildt’s post-game interview click the audio player below. Be warned the quality of the Cardinals Zoom call was not as good as usual. Mike Shildt Rob Rains Game […]

Did you miss Rob Rains Facebook LIVE about the St. Louis Cardinals 4-3-19

Marcell Ozuna hit a three-run homer and drove in five runs to carry the Cardinals past the Reds on Saturday at Busch Stadium. […]