As he walked through the Cardinals clubhouse on Sunday morning, Marcell Ozuna tossed an empty drink bottle toward a trash can. It came up short of the target.

Luckily that wasn’t an omen for the Cardinals day.

Their target on Sunday, in game 162 of the regular season, was the same as it was on day one on March 28 in Milwaukee – winning the NL Central.

They went into the final day needing to beat the Cubs, or have the Rockies beat the Brewers, to hit that target. Thanks to an early power display and another stellar performance from Jack Flaherty, the Cardinals removed any potential drama early and cruised to a 9-0 win at Busch Stadium.

The win allowed the Cardinals to finish two games ahead of the Brewers (who lost in 13 innings on Sunday), avoid a tiebreaker game on Monday, avoid a wild card matchup against Max Scherzer and the Nationals in Washington on Tuesday and avoid a first-round Division Series matchup against the Dodgers.

The Cardinals will play the Braves in the Division Series, starting on Thursday in Atlanta, after winning the NL Central for the first time since 2015.

“It’s felt too long,” said Adam Wainwright. “We got ourselves in a position where we controlled our own destiny and when you do that you are in a good spot. The last three years we’ve been without it, and not knowing if I was going to play anymore after last year, and coming back and being able to contribute to a winning team, it’s special.

“Last year I was done in my mind. It was over. To be honest I went out on my rehab assignment to put away all doubt in my mind that I was done. I expected to go and try to compete and try to do well and that my arm would fail. My arm responded well and I was able to come back and contribute.”

And now Wainwright, as he predicted on Saturday night, will get to make at least one more start, against the Braves, the 13th postseason start in his career.

For at least 15 of the players expected to be on the Cardinals’ roster for that series, this will be their first trip to the postseason. None have waited longer than Ozuna, who played the 931st regular-season game of his career on Sunday.

He did not have as good a day as some of his teammates, and didn’t have as good a September as Tommy Edman, but there was no taking the big smile off his face in the celebratory Cardinals’ clubhouse after the game.

“This is special for me because ever since I got traded, I wanted to get here,” Ozuna said. “This was an organization that seemed like it was in the playoffs every year and finally I made it. I’m so happy to be here. It means everything. It’s amazing.”

It’s also a first trip to the playoffs, at least in the major leagues, for manager Mike Shildt.

“Some of the most frustrating nights I’ve had was watching other teams celebrating on our field,” he said. “That didn’t set real well with me, and it’s nice to be able to do what we should do. I can’t say enough about what Jack did. Guys showed up across the board but Jack set the tone.

“You believe in a group that has a lot of talent, dedication and desire every day to compete and win, that’s a special combination and it’s an easy combination to believe in.”

Flaherty had started two previous game 162s, the last two years, and lost both. This one had a little more meaning, and the result was far different than the games in 2017 and 2018 but no different than the ones he has pitched the second half of this season.

Thanks to a two-run first inning and homers from Dexter Fowler in the second, Matt Carpenter in the third and Paul Goldschmidt in the fourth, Flaherty, another one of those players heading to the postseason for the first time, was on cruise control almost from the beginning of the game and for the first time in the final week, it didn’t matter what the Brewers did in their game in Colorado. 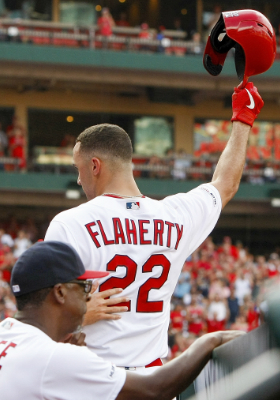 “What was really fun was the first inning we went out there and Jack puts up a zero (on eight pitches) and we look up and the Brewers score two in the first,” Wainwright said. “We were like ‘awesome.’ There was no like ‘oh no’; this is going to make it more fun. The guys went out and put a great first inning up there and set the tone.”

Given the early lead, Flaherty was able to relax and do what he has done for the second half of the season. Lifted for a pinch-hitter after seven shutout innings, allowing only two hits, Flaherty got a standing ovation and a curtain call. He threw only 69 pitches and got as many outs, 21, as the number of balls he threw in the game.

His first postseason start will come on game two on Friday in Atlanta, which also will leave him ready to pitch on normal rest should the Cardinals and Braves reach a deciding fifth game.

“We’re not celebrating right now if Jack doesn’t do what he did the second half,” Wainwright said. “Best second half I’ve ever seen.

“I told him today, ‘Is your season over?’ and he said no. That’s exactly right. We’ll celebrate this today and get back to work in a couple days.”

To the 23-year-old Flaherty, what he did on Sunday and what he did the last three months was just pitch the way he knows he is capable of pitching.

Goldschmidt’s homer, which followed an RBI single in the first inning, was his 34th of the year. He also finished with 97 RBIs and got to pop the champagne bottles in his first season with the Cardinals and help end the team’s postseason drought.

“For everyone else, every three or four years (of making it to the playoffs) is good but not for this organization,” Goldschmidt said. “Those expectations are awesome; but not as awesome as this. You want to win. That’s what every team wants. We’re glad we were able to do this, but we’ve got a lot of work to do.”

The goal now is to have three more celebrations in the next month, which would result in another world championship.

“I told the young guys, ‘This is the taste you chase the rest of your career,’” Wainwright said. “There’s nothing like it.” 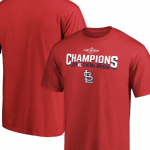 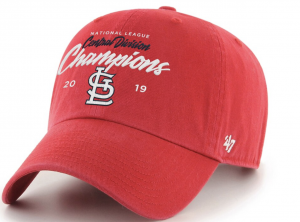