JUPITER, Fla. – Each of the 72 players in the Cardinals’ spring training camp has a story, but one of the most unique has to belong to Tommy Parsons.

Two years ago, Parsons was a senior at tiny Division III Adrian College in Michigan. What would his reaction have been if he was told 24 months ago that he would be where he is today?

“I wouldn’t have believed it,” he said.

Adding to the unlikely story is the fact that Parsons was not drafted that year and was a couple of days away from driving to a tryout for the independent Gateway Grizzlies when he got a phone call from Cardinals’ area scout Jason Bryans.

Bryans was offering more than a tryout. He had a contract ready for Parsons to sign. The next day, Parsons was headed from his home in Ohio to Johnson City, Tenn., and the start of his pro career.

“To say I thought Tommy would find himself in big league camp less than two years after we signed him as a non-drafted free agent agent would be quite a stretch,” Bryans said.

So what did Parsons do to earn that spring training invitation, just one year after he was not even invited to the Cardinals’ early spring camp for their top minor-league prospects?

The same thing which a year later has him now ranked as the organization’s 21st-best prospect by MLB.com.

“It’s a performance business,” said Tim Leveque, the Cardinals’ senior pitching coordinator. “Last year he moved up through the organization and kept performing. This is a meritocracy in a lot of ways, and he exemplified that.

“It’s a great opportunity for him. He earned it.”

As a college senior, Parsons did get looks from scouts as they evaluated players for the draft even though he was pitching for a school with an enrollment of 1,609 students. His performance intrigued both scouts and analytics departments as he set almost every school record possible at Adrian and finished his college career with more wins, 40, than walks allowed, 36.

Still, Parsons watched pick by pick go by as the 30 major-league teams went through 40 rounds of the 2018 draft and never called his name.

“I thought there was a chance I could get drafted,” Parsons said. “I filled out some questionnaires for teams. I was really upset the night the draft ended.”

Parsons’ coach at Adrian, Craig Rainey definitely thought he should have been drafted but realized what probably was one of the reasons why that didn’t happen.

“It just happened to be a couple of the times a lot of the guys were here he was just coming off the flu,” Rainey said. “He lost 12 pounds but he was pitching because that’s what Tommy does. He doesn’t miss starts. His velocity was down, and probably was a little short of what they were looking for. The days prior to that and days after that he was a lot better but that’s just the way it went.

“Honestly in the long run it’s probably worked out better for him. He possibly got a better opportunity than if he had been a late-round draft pick by somebody who didn’t need him as much or didn’t have a hole to fill. Things shake out for a reason, and maybe this was the reason it went the way it did.”

Parsons spent the first two days after the draft ended driving from Ohio to Burlington, N.C., where he had a tryout with the Royals. He was back at home, thinking he might have to go the independent baseball route to begin his career, when he got the call from Bryans.

Bryans’ first exposure to Parsons came at a showcase in the fall of his senior year. “Fifteen pitch bullpen showcases are not the best look, particularly for someone like Tommy, who will not light up the gun or flash a wipeout slider,” Bryans said. “Repeatable delivery and command aren’t sexy in those settings.”

Bryans made it a point to add Parsons to the list of players in his area he wanted to see in the spring.

“His stuff was not overwhelming, even by D-3 standards,” Bryans said. “One thing he could do, however, was command his fastball. He was not just a strike thrower. It was up-down, in-out. He threw it where he wanted and he was completely in charge.

“I knew our development staff gives all of our kids, regardless of where they are from or round drafted, a chance to reach their potential.”

Taking advantage of an opportunity 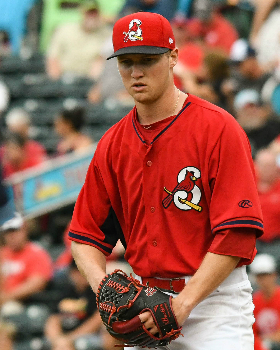 Leveque first saw Parsons at Johnson City, a level where the Cardinals traditionally start most of their college draft picks and place many of their younger Latin players moving up from the Gulf Coast League.

“You could tell pretty quickly that he was above the league with his command and stuff,” Leveque said. “He’s an intelligent pitcher. He throws strikes. He’s got a good changeup and he knows how to read hitters and read swings. He’s a really good competitor. I think the ability of knowing the strike zone and his pitching IQ and intelligence allows him to get outs.”

After going 5-1 in the Appalachian League in 13 starts, Parsons was promoted to Peoria to begin the 2019 season – a year he would end four levels higher at Memphis. Parsons was promoted from Peoria to Palm Beach after just five starts. He made seven starts at Palm Beach before moving up to Springfield. He pitched there for most of the second half of the season, making 14 starts, before starting his final game of the season at Memphis.

Combined between the four levels Parsons was 11-9 in 27 starts. He recorded 148 strikeouts and issued only 27 walks in 165 innings.

His college coach was not surprised. It was the same type of performance Parsons turned in for four consecutive years at Adrian, when he finished with a 40-4 career record and a business degree.

“Tommy has great drive and he has the willpower and work ethic and everything else,” Rainey said. “To some people it’s probably surprising but to me I figured he would succeed given the opportunity. It has accelerated probably a little more quickly than I could have imagined or he could have imagined.

“He’s a throwback guy. It seems now everything people want to talk about is velo, spin rate and all the stuff pitchers are judged by. But he is just a Greg Maddux- type guy. He pounds the strike zone with three pitches he locates very well and gets guys out. He’s not a 98 or 99 MPH guy but he knows how to pitch … He’s a pitcher’s pitcher. That’s probably the best way I can say it.”

Parsons was working at his dad’s distribution company this winter when he got the word that he was being invited to the major-league camp. Once he arrived, Parsons began trying to soak up as much knowledge as possible from whoever was willing to offer a tip or suggestion.

“Anything they can offer,” he said. “This isn’t college. The level of hitters is different. The game is faster. Everything is different.”

Yet, in one sense, it’s the same – the desire to succeed, the work ethic necessary – those elements that created this opportunity have not changed.

The 24-year-old Parsons was even more determined to succeed after his first appearance of the spring on Tuesday. He struck out the first hitter he faced, before allowing an infield single, issuing a walk and then giving up another infield single, leaving the game with the bases loaded.

The knowledge gained from that experience will only help the next time he takes the mound. 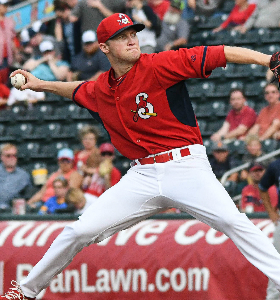 “His college coach, Craig Rainey, spoke very highly about Tommy’s makeup and competiveness,” Bryans said. “It just all added up. He deserved a chance. When I read our (minor league) game reports, it was uncanny how many times ‘composure’, ‘poise’ or ‘mound presence’ was mentioned.

“Tommy has taken the opportunity and ran with it. That did not surprise me. He’s a great young man and he believes in himself. I’m very proud of him.”

So is Rainey, who believes one story from Parsons’s senior season accurately sums up his ability and personality.

“We were playing in the regionals and he had pitched seven or eight innings,” Rainey said. “We were down and then scored a couple runs late to take the lead. We had a guy warming up in the bullpen and as soon as we scored Tommy came over and said, ‘I’m not coming out.’

“I told him we were close to that point because of his pitch count. He said, ‘We’ll fight if you’re going to take me out.’ Probably something I don’t want to do is get into a fight with him. We left him in, he completed the game and we won and moved on. That’s just him, that’s who he is.

“He wants the ball. He wants the big situations. He wants it every day when it’s his turn and he will find a way. His pitch count was high, he probably was running out of gas and he found a way to maneuver and get us three or four more outs at the end of the game that we needed.