Luis Robert will be patrolling center field in the Cardinals game on Saturday, just as a lot of their top scouts and officials envisioned a few years ago.

Well OK, it won’t exactly be the way they envisioned it.

Back in 2017, when the Cardinals were in full pursuit of the then 19-year-old amateur free agent, John Mozeliak, Moises Rodriguez, Matt Slater and the other Cardinals officials involved in scouting Robert foresaw a future where he would one day be playing center field for the Cardinals.

Instead, as the Cardinals return to play after their season was interrupted because of a COVID-19 outbreak, they will be watching Robert playing against them instead of for them.

Robert signed with the White Sox in 2017, a disappointment that still lingers for the Cardinals, who thought they had made a very competitive offer and were in contention to sign him right up until his final decision.

Rodriguez, now the team’s assistant general manager, was the director of international operations for the Cardinals at the time, and Robert was somebody who had been on his radar for a while.

“I first saw him when he was 15 years old, playing first base for the Cuban national team, in an 18U world tournament in 2013 in Taiwan,” Rodriguez said this week. “That team was pretty loaded. He was playing first base because every other position was taken by somebody that had more experience.”

Rodriguez or other scouts from the Cardinals saw Robert every time the Cuban team played in international tournaments the next few years – including at the 18U World Cup in 2015 in Osaka, Japan.

“By then, he really stood out,” Rodriguez said. “He arguably was the best player in that tournament.”

Robert, who turned 23 earlier this month, is still standing out as one of the best prospects in the game. He entered this shortened-season as one of the favorites to become the American League Rookie of the Year.

Trying to sign a top international free agent is never easy, and that was especially true when the Cardinals were pursuing Robert, before the current bonus rules were put in place. It’s not the same as the amateur draft of players from the United States where the only team that can sign a player is the one that drafts him.

What happened that year, 2017, however, seemed to leave the Cardinals in a little better position to pursue Robert than would likely have been the case in some other years.

Several of the teams that usually spent heavily on international free agents were ineligible to sign players for more than $300,000 because of previous over-pool signings. The 2016-17 class also was expected to be the final year before the rules for signing free agents were going to change, with stricter bonus rules put in place with hard caps.

The Cardinals decided it was worth pursuing multiple players in that class and they went over their signing cap to sign several they liked early in the signing period. Included in that group were pitcher Johan Oviedo, also from Cuba, who got a $1.9 million signing bonus, and catcher Ivan Herrera. The two are now ranked among the top prospects in the organization. Both are part of the team’s satellite camp in Springfield this summer. 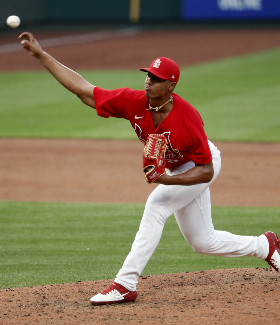 The 22-year-old Oviedo projects as a middle=of-the-rotation starter in the major leagues while Herrera could be the heir apparent to succeed Yadier Molina in the not-too-distant future.

Herrera was just 16 when he signed that year out of Panama for a bonus of $200,000. Seeing prospects develop like Herrera who did not receive six-figure bonuses helps to offset the sting of players who, for whatever reason, fail to progress and develop as the organization expected.

The Cardinals also spent $1.25 million to sign Randy Arozarena, who made his way to the major leagues in 2019 before he was one of the players traded to Tampa Bay last winter in the deal that brought left-handed pitcher Matthew Liberatore, another top prospect, to the Cardinals.

All of those and more signings, however, left the Cardinals in a position where they had to pay a dollar-for-dollar penalty for every dollar they spent that exceeded the cap on their bonus pool.

Those signings also came about 11 months before Robert signed in May 2017.

“Leading up to the July 2 start of the signing period, you are always lining up stuff and have an idea of who you are going to sign,” Rodriguez said. “That year we had a lot of big targets.”

They also had no idea that Robert would be cleared by Major League Baseball in time to sign before the deadline in early June. Even if they had known, however, it likely would not have changed their strategy to sign the other players first.

If they had waited to spend all of their money on Robert, and missed out, then they would have been left empty-handed.

When Robert did become available, however, the Cardinals – despite the money they had already spent in the international free agent market – tried to extend themselves as far as possible financially in hopes of getting a deal completed with someone they thought would develop into an elite player.

They believed they had a good read on Robert’s potential from his appearances in the international tournaments, his track record in Cuba and their evaluation of workouts once he became eligible to sign.

Mozeliak went to the Dominican Republic to meet with Robert and they went out to dinner with other Cardinals officials. In the end, Robert’s decision came down to the Cardinals and the White Sox.

According to media reports, his signing bonus from the White Sox was $26 million. The Cardinals won’t confirm what their final offer was to Robert, but it was believed to be somewhere between $20 million and $25 million.

Had they signed him, they also would have had to match that amount in a check to Major League Baseball as the penalty for going over their cap – so signing Robert would basically have cost the Cardinals more than $50 million.

Part of Robert’s decision might have been based on a recruiting pitch by the White Sox, which reportedly included a video stressing their history with other Cuban players.

When Rodriguez and the others involved in chasing Robert, including Mozeliak and Slater, watch him on the field on Saturday, there will no doubt be some moments of regret that the signing did not work out differently.

“That happens all the time,” Rodriguez said, “with a lot of players you are seeing right now on TV. He was a guy you could dream on.”