The St. Louis Jewish Community Center Association is showing a true film about an unknown Jewish hero, and sportswriter Myron Holtzman will be featured in a discussion that is open to the public on Wed. Nov. 11, 2020 at 7 p.m. It is part of the JCCA’s 25th Annual Film Festival, which due to COVID-19 will be done virtually. 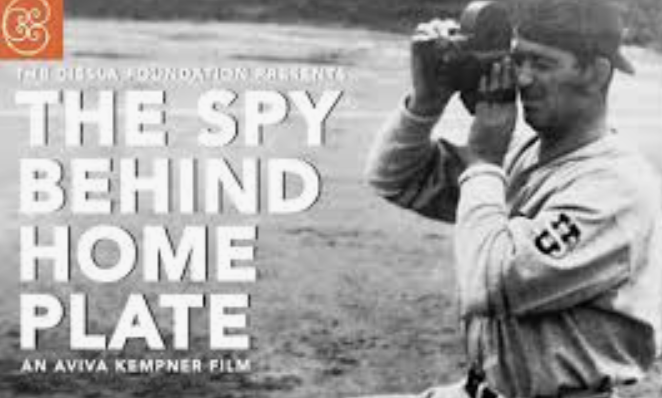 “The Spy Behind Home Plate”  is the first feature-length documentary to tell the real story of Morris “Moe” Berg, the enigmatic and brilliant Jewish baseball player turned spy.

The festival begins on November 9 and continues to November 15. Once a person buys  ticket, they can watch any movie at any time day or night. The only things that are scheduled at specific times are the discussions. The JCCA  advises people to watch the films before they participate in the discussions.

“Because of my background in sports,  I will be introducing Aviva Kempner, the writer, director and producer and hopefully keep the Zoom audience moving along,” said Holtzman.

Berg played in the major leagues during baseball’s Golden Age in the 1920s and 1930s. But few people know that he also worked for the Office of Strategic Services (OSS), spying in Europe and playing a prominent role in America’s efforts to undermine the German atomic bomb program during WWII. His life is explored through rare historical footage and photographs as well as interviews with an All-Star roster of celebrities from the world of sports, spycraft and history.

The movie will be shown in its entirety and tickets are $14. Then after the movie there will be a free discussion .

“The event is a fundraiser for the J,” said Holtzman. “I have been a member there forever and have volunteered my time on several committees. I’m really looking forward to the documentary because you rarely see an athlete get into this type of situation during a World War.”

To watch the trailer of the movie CLICK HERE

The Festival’s complete lineup of features and documentaries will be available to view on-demand anytime from November 9-15. All films and programs will be purchased and shown via our viewing platform. Once you purchase a ticket or pass, you will be emailed information on how to unlock films for viewing during the week of the festival. Once a ticketholder begins watching a program, access to it remains available for 48 hours and must be completed by the end of the festival.

Live Zoom Q&As with filmmakers, documentary subjects and local speakers will accompany many of the programs, so it is recommended you view the film by that time. Q&As are free of charge.

Festival tech support is available! Don’t be nervous about watching films at home. We’re here to help. Call our hotline 314.442.3179. There will also be live technical support during the Festival week.

For the full lineup of the Jewish Community Center’s 2020 Film Festival CLICK HERE.