JUPITER, Fla. – The next time that Dalton Roach gets a little worried about a hitter who is staring out at him on the pitcher’s mound, the Cardinals’ prospect will just need to remember he has faced off against a tougher and more dangerous opponent in the past.

Last October, Roach stared down a bear who was coming after him in his tree stand while he was deer hunting in Wisconsin.

The bear, which Roach estimates weighed about 250 pounds, got close enough to bite Roach in the back before Roach started, in his words, “acting big, yelling at him, trying to make him think I’m bigger than him even though I wasn’t.”

When Roach said he first saw the bear, “I was thinking it was kind of cool, just fun to be out in nature like that.”

“The one part about being in the tree stand was I couldn’t go anywhere and even if I tried (to run) he was a whole lot faster than I am.

Roach’s tree stand was 17 to 18 feet above ground and because he was sitting down, the bear was not able to grab or bite his leg.

“With the position I was in I think my back was probably the closest thing to him,” Roach said. “One paw was on my hop and one paw had to be on the tree to hold him up so the only thing high enough to get me at that point was his mouth. I could feel it.

“They can climb a lot faster than you think, like a big ‘ol squirrel.”

After Roach, 25, was able to get the bear out of the tree, he watched as the bear eventually went on his way.

“He kind of hovered around for about a half hour or so,” Roach said. “I waited until I knew about where he was, out of eye shot, and then I made my way out of the woods.”

When he got to his truck, Roach was able to text his wife, Sarah, who was at their home about an hour away in Eau Claire. “Hey I was bit by a bear but I’m OK.”

Before she could respond, or before Roach could add more to his message, he lost service on his phone.

“I wasn’t able to talk to her about it,” he said. “Her only knowledge was that I got bit and supposedly I was OK. I knew I was not in any immediate need of treatment so I took my time, settled my heart rate down and drove home.”

The two puncture wounds left a mark on his back, and Roach with a story to tell. Some of his teammates in the Cardinals’ minor-league knew it had happened, but not all the details.

“I still have a little mark and it’s one of those that unfortunately will probably go away at some point,” he said. “The story won’t but I won’t have much proof for it later.”

Later that night, Roach even had to convince nurses in the emergency room about what had happened.

“They had a couple of nurses come to check on me to make sure I was mentally stable,” he said. “I was laughing and kind of giggling. I had my wife check my back and it wasn’t bleeding, so I knew nothing was too bad. The reason we went was because you don’t know what kind of infections or bacteria are in the mouth of a bear. Wild animals are dirty.”

For precaution, Roach had to undergo a total of 27 rabies shots, receiving 24 of them that night, including 22 directly on the bite.

“Personally I think the shots were worse than getting bit,” he said. “Each little injection was like a hornet sting, and you get 22 of those when the area already was a little tender, and it’s not real fun.”

The incident has not prevented Roach from getting back in the woods. He has been hunting on his own since he was 12 years old.

“I enjoy it and I’m going to continue to do it.” he said. “Yeah it happened and it was scary for the rest of the year. You’re a little uneasy when you go in that area, but it’s such a freak situation that it isn’t going to stop me from hunting. That’s what I like to do in the offseason, it’s how I spend my time. I was out there three or four days later.”

In at least one way, Roach could relate going back out to hunt to getting back on the mound and pitching again after a rough outing, or trying to overcome other obstacles.

The first time Roach had to do that was in 2018 when he was selected by the Astros in the 21st round of the amateur draft out of Minnesota State University. The Astros found something they didn’t like during his physical, however, and voided his contract offer for medical reasons.

Forced to find another place to pitch, his agent found Roach a spot on the independent league River City Rascals. 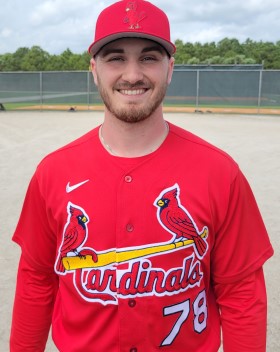 “I was happy I ended up there,” he said. “It was a great experience and kind of turned into a really good route for my career. Obviously I wish I could have jumped right into affiliated ball and started that way, but you learn a lot about the game when you are playing in a situation like that where now it’s make or break. I like to look at it as a stepping stone.”

Roach spent parts of two seasons with the Rascals before being signed by the Cardinals. He pitched in 12 games spread across three levels of the farm system in 2019, then had to miss 2020 when Covid canceled all of the minor-league seasons.

He was promoted to Double A Springfield in 2021, where both he and the team had a challenging season. He was 7-10 for a team that finished 30 games under .500.

“Individually not everything was bad but it definitely was not a year that I look back at and am super proud or happy about,” Roach said. “You really just learn from it.”

Roach is motivated this spring to show how much he has learned from last season.

“It’s really easy to get complacent when you are just having success and kind of float through it,” he said. “When you struggle kind of as our team did it gives you a lot of things to work on. You just have to pay attention to what those things are and actually build off it.

For now, one of Roach’s goals is to pitch well enough that he can tell a story that’s better than the story about the time he got bit by a bear.

“I thought my career stories would be on the field, not happening out in the woods,” he said.