As is the case with most graduates of Washington University, Ryan Loutos had a good job lined up when he earned his undergraduate degree in computer science last spring.

He accepted an offer to become a software engineer for Morningstar, Inc., a large financial services firm in Chicago, where his starting salary would have been between $70,000 and $80,000 a year.

As attractive as that sounded, there was just one problem. Loutos wanted to play professional baseball instead.

Loutos, a righthanded pitcher, was coming off a season in which he put up some eye-popping numbers for the Bears, one of the top Division 3 teams in the country. In 14 games, 13 of them starts, the 6-foot-5 Loutos was 11-1 with one save, allowing just 66 hits and 12 walks in 94 innings, while recording 116 strikeouts with a 1.33 ERA.

That garnered some looks from scouts before the amateur draft, but the 20-round process played out with Loutos waiting, to no avail, for his name to be called.

His disappointment didn’t last long, however. The Cardinals called shortly after the draft concluded and gave him the chance he had hoped for, being able to tell Morningstar thanks but no thanks. He received a $20,000 bonus and a plane ticket to Florida after signing as a non-drafted free agent.

“I have the rest of my life to work,” Loutos said. “Getting a chance to play baseball and pursue this … I know talking to a lot of my college buddies who have started jobs, a lot of them enjoy what they are doing but I can tell you that I know a lot of them would love to be in my shoes.

“I could be at a desk right now in Chicago not enjoying what I was doing. Instead, I get to play baseball.”

Even this week’s 12-hour bus ride from Springfield to Midland, Texas, did not dampen his spirits.

“It wasn’t as bad as I thought it would be,” Loutos said. “I was able to sleep OK; I was pretty tired. That’s what the minors is all about.”

The 23-year-old Loutos also has already learned that what the minors is all about is taking advantage of your opportunity, which is what he has done. In less than a year, he has moved up from Palm Beach to Peoria and now to Springfield, promoted to the Double A left on May 17 – just 10 months after he signed.

“When I got called up I remember driving down here and talking to my dad and other people on the phone about how I was facing D-3 hitters last year and now I’m in Double A,” Loutos said. “A year ago, if you had told me where I would be right now, I would probably have said you were crazy.”

Loutos believes he has moved up so quickly because he has basically the same mindset and attitude he had in high school in the Chicago suburbs, when he knew what he wanted to do. His goal then was to pitch for Stanford, or perhaps an Ivy League school.

“I really wasn’t at the point talent-wise where I could go to a Division 1 school,” Loutos said. “I was throwing maybe 85-86. Topping out at 86 out of high school you’re probably not going to go to Stanford … but I knew I still wanted to go to a high academic school.”

That led him to Washington U., which Loutos described as “a perfect fit.”

“I treated it like I was going to school to play baseball,” Loutos said. “Baseball is the focus, but you have so many other things going on too, so it’s kind of hard to really fully go all in on baseball when you are taking 18 credits and trying to get a degree as well.” 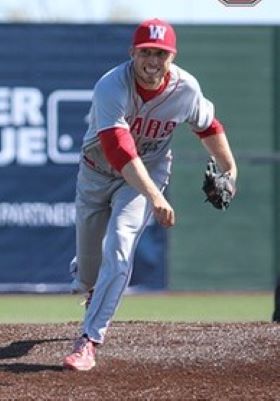 His coach at Washington U., Pat Bloom, thinks the academic challenges an athlete faces at a school like Wash U. often is not appreciated enough by those who simply look at how a player is performing on the field.

“Something that gets undersold when scouts and other pro baseball people look at and evaluate these kids is that they are in school and at Wash U. they are true student-athletes,” Bloom said. “They are going through the grind academically and athletically and it’s difficult sometimes for them to really cater their entire day to trying to put on muscle mass or adding weight because they might be up until 2 or 3 a.m. studying for a test or getting a project done, then the next day they have to go to practice.

“I think D-3 kids get analyzed even harder than others because of the stigma around the level. The reality of it is there are good players everywhere.”

From the time he arrived on campus, Loutos showed Bloom some of the traits that he thinks are necessary for a player to make the jump to the pro level.

“He just needed that extra tick up in velocity to really start to show his stuff at another level,” Bloom said. “In my opinion he was a very polished pitcher when he got through his senior year. … In terms of overall pitchability, makeup, intelligence and everything, it’s no surprise to me that he is able to be successful in pro ball whatsoever.”

Loutos missed almost all of his junior season because of the pandemic, but that actually turned out for the best for him.

“I kind of said I had nothing to lose, so I went and tried to put on a bunch of weight, which was something I didn’t do earlier in my college career,” Loutos said. “All of a sudden my velocity started to tick up. I got a lot stronger. I didn’t know where the ball was going, but I was throwing a lot harder.”

Loutos spent the summer in the Northwoods League, slowly getting more control of his pitches, and that improvement continued when he returned to St. Louis for his senior season. After adding 15 pounds between his junior and senior seasons, Loutos found himself throwing between 88 and 92 miles per hour. When he started his career at Palm Beach he was sitting 90 to 92 as he moved to the bullpen. Encouraged by the start to his career, he hit the weight room hard again last winter.

“I finally had a full off-season to focus on baseball and that allowed me to open some eyes in spring training and keep that ball rolling,” Loutos said.

Loutos, who put on another 10 pounds over the off-season, is now throwing between 94 and 97 miles per hour.

“The biggest thing is my off-speed stuff is better than last year,” he said, “as well as the fact I am throwing a lot harder.”

It has only taken Loutos a few outings at the Double A level to impress manager Jose Leger.

“I like him,” Leger said. “He’s a little funky. I like his breaking ball, and he’s got good poise on the mound. He’s done well. I like how he conducts himself, and his demeanor. He’s a smart kid.

“He knows what he is doing. He’s a quiet kid, poised. He’s got an idea of how to pitch and he throws strikes. He’s got a lot going for him.”

Since his promotion, Loutos has not given up a run in six of his eight outings for Springfield, posting a 2.31 ERA while holding opponents to a.209 batting average.

One of the early lessons Loutos has learned in Springfield is about the difference in hitters at the Double A level.

“In Peoria I was able to use my fastball to get swings and misses a lot more, just because I was throwing a little harder,” Loutos said. “Here it’s really tough to blow guys away with fastballs. They are not going to swing at as many balls that I was getting swings on in Peoria.

“I still have the same mindset, making little adjustments, knowing I can’t just rip a high fastball and get a swing. I have to be way more precise with that pitch.”

Loutos has had to make one other transition since signing with the Cardinals. He was a Cubs fan growing up, although living and going to college for four years in St. Louis gave him a new appreciation of the Cardinals, which only increased after he joined the organization. 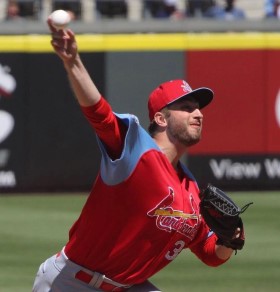 What Loutos has appreciated the most since beginning his career is how the Cardinals have evaluated him based on his performance, not affected by the fact he signed as a non-drafted free agent.

“They treat me the same way they treat a first-rounder and top prospects,” Loutos said. “The Cardinals couldn’t care less where I came from. They are just trying to help me move up in the system just like everybody else. It’s been really cool to be a part of it.”

Bloom believes that Loutos made the right career choice by deciding to play baseball.

“He’s always been a kid that had pro baseball aspirations but at the same time at Wash U. you get these kids who are unbelievably bright and Ryan is no different,” Bloom said. “He was an Academic All-American with a 3.95 GPA. He’s going to have opportunities in front of him after school.

“But Ryan was always a kid that I thought was invested enough in his developmental process that hr would see this thing through. He’s got to really prove it, and he knows that. I’m excited for him.”

Now that he has reached Double A, Loutos has received an increase in his paycheck, now earning $600 a week. It’s still a lot less than if he had gone to work for Morningstar.

The difference in the size of the paycheck doesn’t matter to Loutos. Following his passion and his dream is far more important.

“It’s definitely a little bit different,” he said. “Software engineers make pretty good money. But this is 100 percent worth it.

“My mindset is just to keep going and see where it takes me.”